What this article is about

This article explains how to integrate IBM Operational Decision Manager rule execution services in a Scala application.
IBM Operational Decision Manager is IBM’s Business Rule Management System. Said differently, it is software you use to expose operational decisions, such as the price a product will be proposed to a given client, as services and to externalize the business rules behind these decisions in a dedicated repository so that line of business stakeholders can author and manage them without requiring systematic intervention of IT.
Scala is a programming language that drastically extends Java’s object oriented mechanisms and adds the functional paradigm to it beyond what Java 8 does. The official Scala language site provides really excellent tutorials.
Just as with Java code, Scala code is compiled into JVM bytecode and can interoperate with Java code. This article is taking advantage of this interoperability, as the ODM engine can run on Java objects (actually, bytecode objects) and has a Java API.
The following figure shows the various options: 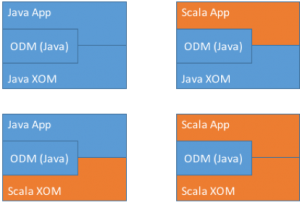 Option 1 is the traditional approach when you create a Java Project for Rule Execution on Java SE, and there is a wizard that generates JSE RES classes and main program.
Option 2 is somehow obvious, as you just need to call the classes just mentioned from a Scala App.
This article shows how to make option 3 and option 4 happen.
The rest of this article makes the following assumptions:

Most of the details in this article will run if you have alternate versions of these IDEs or alternate versions of the language compilers. Please reach out to me at friedlan@fr.ibm.com if there are errors, and I’ll update this article.
The example is reasonably sophisticated and shows that various Scala mechanisms are perfectly managed in ODM.
All considered, this exercise is quite simple, and will be even simpler when we will be able to use a single IDE for both Scala and ODM. The reason this article is so long is that I am giving all details to make sure you will succeed with this approach.

Why it is interesting

There are two reasons why the ODM – Scala integration is interesting.
First, Scala can be viewed as a better Java than Java, as explained above. Therefore, building ODM applications with Scala is a valuable option.
Second, Scala is the preferred language for building Apache Spark applications, the new generation Big Data technology. ODM Business Rules with Apache Spark Batch operations , by Pierre Feillet from the IBM ODM Lab explains well the power of combining Apache Spark with rule based decision management.
There is a number of patterns that combine Apache Spark and ODM, in particular:

Installing Rule Designer on top of the Scala IDE

This paragraph is actually a placeholder for future versions of this article, as Rule Designer, the ODM Eclipse plugin requires Eclipse 4.4.2. Scala IDE 4.5 runs on Eclipse 4.6.1
Working with two IDEs makes things slightly more complex. We need to work on two different workspaces and move libraries around at set up. Once things are in place you do not notice it.
Once Rule Designer and Scala IDE will support common Eclipse versions, things will be simpler.

Installing and running the example

Your setup is now fully functional! You can now:

Creating the example from scratch

Then, create Scala classes for the XOM. Here is the code for the Scala XOM from the example:

Those of you who are familiar with Java but no with Scala can really appreciate how concise it is. The same code in Java would be three times as long.
A few things are worth mentioning:

Before moving on to the next paragraph (Creating the Main Rule Project):

In Rule Designer, create a Main Rule Project using the wizard (File > New > Other… > Rule Designer > Main Rule Project), then add the three libraries in Libraries/lib to the Java Execution Object model.
You can then proceed as usual: Define rule packages, ruleflows, rules, variables, Decision Operations, Deployment Configurations, etc… There are NO limitations.
You will, however, need to tailor the verbalizations as required. In the example above:

You can skip this step if you want your Scala App to consume your ruleapp:

I personally like the idea to write and maintain in Scala XOMs and applications that call rule-based decision services, in particular in the context of Apache Spark and Apache Kafka.
A few things could be done better than what I described here. First, when Scala IDE and Rule Designer will support the same Eclipse versions things will be simplified.
Second, using Scala introspection, we could probably generate generic Java wrappers around Scala classes that follow JavaBean conventions. Alternatively, and it is probably easier and better from a performance viewpoint, we could generate the verbalization file automatically.
In any case, please reach out to me (friedlan@fr.ibm.com) if you wish to discuss.
Last but not least, thanks to Andy Ritchie from IBM for reviewing this article.
Francis Friedlander (friedlan@fr.ibm.com)