This article by Rachel Orti and Melanie Shilpa Rao is for Operational Decision Manager (ODM) users who want to manage the access and permissions when authoring decision services with ODM on Cloud.

This article explains how you can use the new permission management capability in ODM on Cloud to implement these use cases. 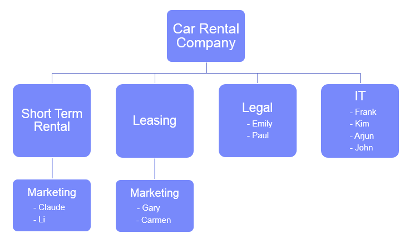 All the people in the marketing, legal and IT teams will be involved in the decision service authoring in the company.

Inviting users and setting up the user roles

When a company requests an ODM on Cloud instance from IBM, they have to provide the name of someone who will be Cloud Administrator for their instance. The role of the Cloud Administrator is to manage user accounts for the company.
John has been assigned this role for the Car Rental company. To give access to the ODM on Cloud instance to his colleagues, John uses the Admin tab of the ODM on Cloud portal to invite them to the instance and to assign them an ODM role.

The ODM role of each person is chosen depending on his or her role in the decision service authoring:

Note: The Permission Manager can be someone other than the Cloud Administrator.
All the invited users receive an email allowing them to activate their access to the ODM on Cloud instance. 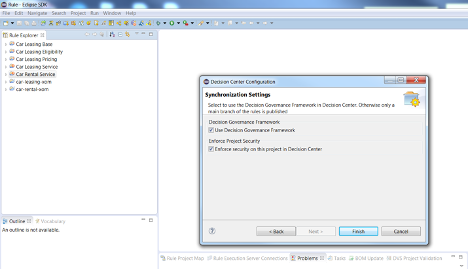 If anyone else other than Kim and John logs on, they will not see any decision services as shown below.

Basic Use Case: Setting up the access for a whole decision service

For “Car Rental Service”, Frank has told John that he himself needs access, along with Kim and Arjun, as well as Claude and Li from the Short Term Rental Marketing team.
Going to the “Groups” tab of the “Administration” tab and editing the existing “Car Rental Service” group, John can see that Kim already belongs to it, because she published the decision service. John adds Frank, Arjun, Claude and Li to this group. 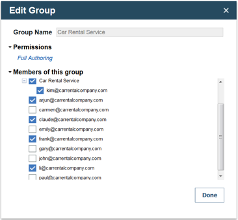 As members of the “Car Rental Service” group, Frank, Kim, Arjun, and Claude and Li are now able to access this decision service in the Business Console.

Advanced Use Case: Setting up fine-grained access for the rule projects of a decision service 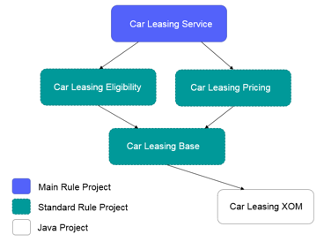 All these people need to have access to the decision service. However, Frank wants fine-grained access, so instead of adding all these people to the “Car Leasing Service” group created by default, John must create several groups to restrict the access to some rule projects.

To know how many groups John must create to implement the fine-grained access, he must first know in detail who should have access to which rule project in the decision service. Frank tells John that: 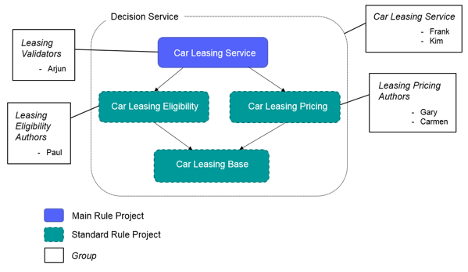 Now that John knows who should have access to which rule project, he can determine the groups required to implement the access policy requested by Frank:

Kim was already added to the “Car Leasing Service” group when she published the decision service, so John only adds Frank to this group.
For people dedicated to the authoring of decision artifacts in the “Car Leasing Eligibility” rule project, John creates the “Leasing Eligibility Authors” group by clicking the “+” button in the “Groups” tab of the Administration tab in the Business Console. In the dialog, he sets the Permissions to “Full Authoring” and adds Paul to the group before completing the creation of the group. 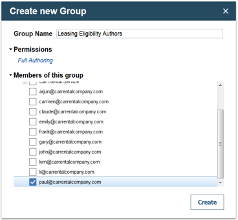 For people dedicated to the authoring of decision artifacts in the “Car Leasing Pricing” rule project, John creates the “Leasing Pricing Authors” group with the Full Authoring permission and adds Gary and Carmen to this group.
John creates a last group “Leasing Validators” with the Full Authoring permission for people who should have only access to the “Car Leasing Service” main rule project and adds Arjun to it.
After he is done, John can see all the existing groups in the “Groups” tab.

Restricting the access on the decision service’s dependent rule projects 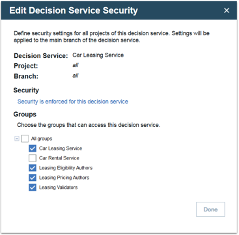 These groups are added for all the rule projects and all the branches of the decision service, as can be seen in the “Project Security” tab. 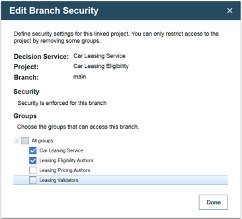 Once he has finished editing the security for all the rule projects, he can see which groups have access to which parts of “Car Leasing Service”. Any releases that depend on the “main” branch inherit the same access settings by default.

John lets Frank know that the fine-grained access is set up. Frank and his team can now start working on “Car Leasing Service”. Indeed, if Frank logs on to the Business Console, he can see the Car Leasing Service decision service in his “Library” tab, and in the “Decision Artifacts” view, he can see all of the dependent rule projects.

In this article we introduced the new permission management capability in ODM on Cloud. We provided some examples of how this feature can be used to restrict user access both at the decision service level and at the dependent rule project level, focusing on Full Authoring permissions. Permission management can be used in more ways, for example with Read Only permissions to give viewing access only, or by overriding access at the release or activity levels.
For more information about ODM on Cloud, visit the ODM on Cloud Knowledge Center.