When you work on an ODM project, it is more than likely that you’ll need a number of different ODM instances to support the promotion of a decision service all the way into production. The need for a well-defined workflow is important if you plan to split up the work into small manageable activities and you want to secure these environments from users who have no need to access them.
ODM on IBM Cloud Private does not have customized environments out-of-the-box. However, you can use the ibm-odm-prod Helm chart to create the different environments that you need. ODM instances can be configured to grant user access to the ODM components, and if you enable Decision Governance you can define what each user can do, and where they can do it.
In most companies the ODM application lifecycle starts with rule development in Rule Designer and Decision Center. The application is then moved to one or more test and validation environments, and ends with deployment of the decision service to a production environment. For many decision services, this requires one instance of Decision Center and at least two (test and production) instances of Decision Server. Decision Server that is configured for testing can start small, whereas an instance that is configured for performance testing is probably much bigger (scaled); in many cases a duplication of the production instance.
To demonstrate the need for different environments, consider a car rental business that uses ODM to automate its decision making. The car rental company wants to use ODM to make rental decisions based on established policies and pricing. Several people who work at the car rental company collaborate to design rules, create, and test a decision service. The company has its development processes well-defined, which involves multiple environments (development, test, QA, UAT (User Acceptance testing), and OAT (Operational Acceptance Testing) before going to production.
The following diagram shows the minimal number of ODM instances in order to separate activities. A decision service is first published from Rule Designer to an ODM development instance, then promoted to an ODM test instance before it is promoted to an ODM production instance. 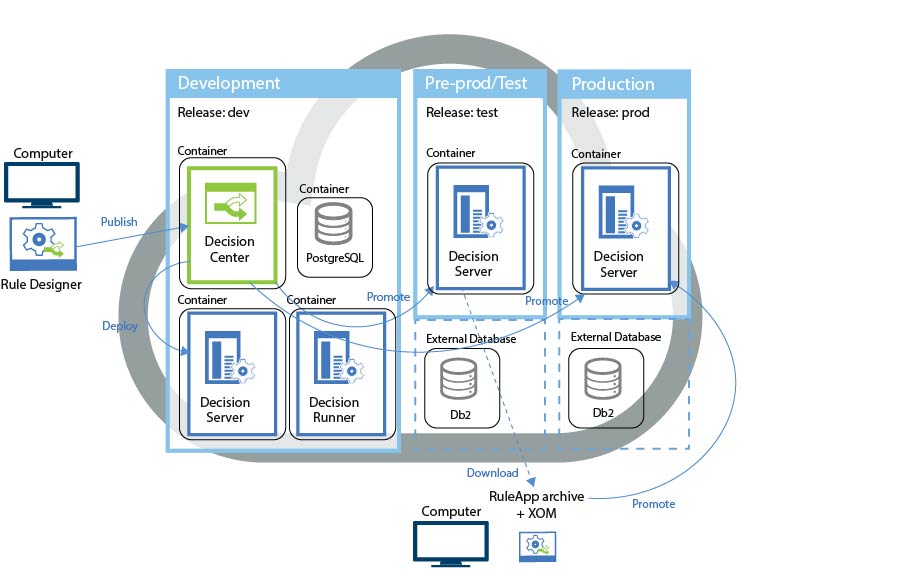 Developers of the ODM application can install a “development instance” for their own use and tests, but generally an IT department decides to set up the entire infrastructure for the lifecycle at the start of the project, as they have to take care of other team requirements and they are not focused only on the ODM project and the business users working on it. Each team has its own schedule and constraints, so the planning of the different teams is separated to avoid delays.
John is the IT administrator at the car rental company and he is responsible for administering user accounts for projects using ODM. He might not use the ODM components himself, but he must assign appropriate user groups for everyone working on the project.
For the car rental company, the essential users and assignments for the ODM application is described in the following table. 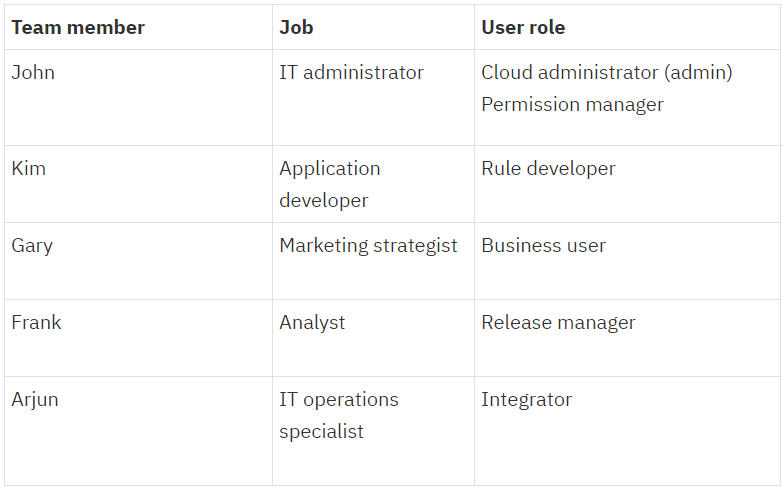 Part 1: Work assigned to the IT team

The following steps describe how to set up the 3 ODM instances for the company’s delivery team. The steps are done as soon as the delivery team is ready to start working on the project.

For the car rental company, the IT team decides to set up Ingress for all of the ODM instances to give the delivery team a clear sense of staging in the exposed endpoints. Ingress provides a way to route requests to services based on the request host or path. IBM Cloud Private includes a Nginx ingress controller to forward outside traffic into a single entry point that acts as a reverse proxy for the in-cluster services. Ingress gives services externally reachable URLs, load balancing, name-based virtual hosting, and more.
The following diagram shows an example of how Ingress can be used to direct traffic to 3 different ODM instances. In this simplified use case, one TLS/SSL certificate is used for both the development/authoring and pre-prod/testing instances. This certificate contains a domain identity (CN) of *.carrental.com (a wildcard prefixed to a base domain), which permits access to all of the hosts that end with the base domain. The production instance can either use the same certificate as the other instances, in which case deployment can occur between all of the instances or for security reasons it can specify its own TLS certificate. In this example, the production instance uses a different certificate and specifies a domain identity (CN) of prodcarrental.com. The production certificate is often supplied by a trusted/root certificate authority. 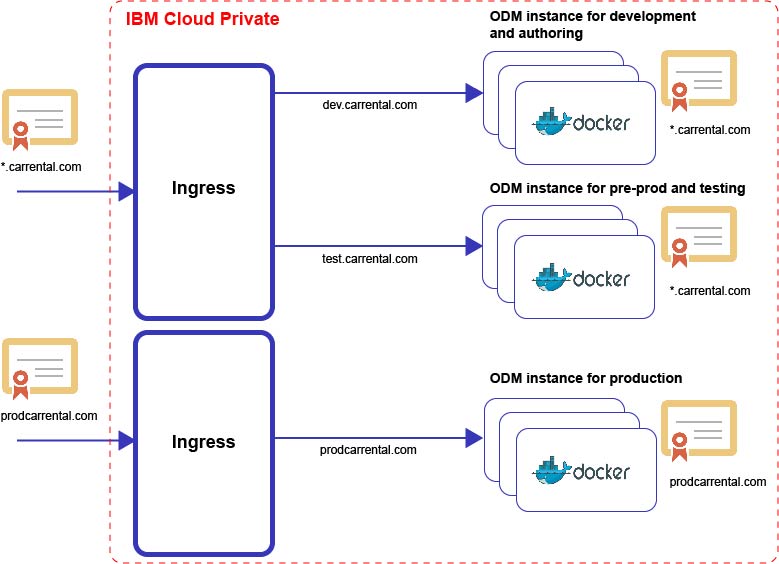 IT team step 1: Configure and install an ODM development and authoring instance

IT team step 2: Configure and install an ODM pre-prod/test instance

In this example, the car rental company uses a single pre-prod/test instance. One execution instance is really an absolute minimum, so the following steps can be repeated for each new test/QA/execution environment you need.

IT team step 3: Configure and install the ODM production instance

In some companies, the development and pre-prod/test instances (where changes are made) are physically separated from the production instance (which end users use). The staged deployment process allows delivery teams to rollout their changes, test them, and roll them back in case of problems. Separating development and production physically is a good way to ensure that a problem in one does not interfere with the other.

The following steps describe what activities are done in each instance before the decision service is promoted to the next stage in each release cycle. The steps are repeated for each new release.

Frank, as the release manager, initiates the next step in the workflow by deploying the most recent decision service release to the test instance. Kim works closely with Arjun, the integrator, to test and validate that the decision service is running as expected.

Frank, as the release manager, takes the final step in the workflow when the decision service is complete and Frank is satisfied with the benchmark results in the test instance.