High availability is becoming an increasingly popular term due to advances in infrastructure components such as networking, compute and storage. It’s also a necessity today for businesses in the banking, financial and insurance sectors.

IBM Spectrum Virtualize HyperSwap is a dual-site solution that provides continuous availability of data during planned and unplanned outages. If storage at either site goes offline, HyperSwap will automatically fail over storage access to the system at the surviving site.

In this blog post, I want to share my experience deploying HyperSwap for an insurance company based in India and show how HyperSwap made a difference in the life of the company’s five million customers.

What to do about slow replication and recovery

This client had its Oracle database and applications running on heterogeneous storage systems. The workload hosted on these systems was protected by an application level asynchronous replication to a remote site that was lagging an hour behind the primary site.

It was taking nearly three hours for the client to resume its business at the remote site, involving various manual recovery procedures at the application level by several teams following a failure of the storage system at the primary site. This had a direct impact on the services availed by the insurance company’s users.

IBM Systems Lab Services helped the client with a comprehensive solution to migrate and consolidate its heterogenous storage infrastructure to an IBM Spectrum Virtualize-based high-availability HyperSwap solution at its primary data center without affecting the existing ability of recovering at the remote site.

The solution consists of migrating the company’s data from existing storage systems to new storage hardware and technology. Three IBM Storwize V7000 storage systems provided in HyperSwap topology to achieve high availability against storage hardware failure at the primary site. The solution uses IP quorums as a tie breaker during a split-brain situation in the HyperSwap cluster configuration. IP quorum eliminates the need for an expensive Fiber Channel quorum located outside the V7000 cluster system.  The client already had an application cluster in place to sustain a failure on its server hardware. 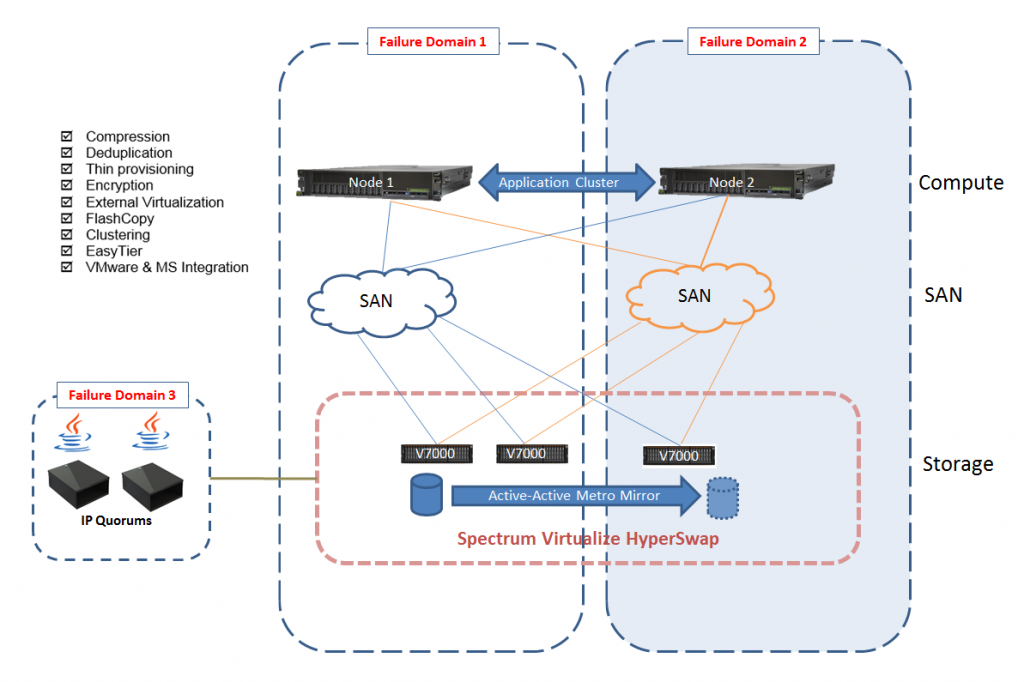 I was involved in the design and build phase, and after the deployment, we did extensive testing to demonstrate the setup — including testing V7000 controller failure, quorum failure and the split-brain situation. During tests, there was no interruption to I/O workload and the application sustained the various failure scenarios.

IBM HyperSwap, in conjunction with the application cluster, enabled the insurer to perform automatic failover of storage access across failure domains with no change in its existing host infrastructure. This enabled the company to ensure continuous availability of services to its customers during an unforeseen outage at either site.

The solution was designed in such a way that the workload was balanced on both failure domains so that none of the storage controllers are idle during regular operations.

Why is IBM HyperSwap a preferred solution for high availability?

IBM HyperSwap is built into IBM Spectrum Virtualize software and doesn’t require any additional software or hardware components, such as additional multipathing software on the host or SAS-FC bridges for the communication between two sites. It only requires traditional Fiber Channel (FC or FCIP) connectivity between the sites and native multipathing drivers on the host. Organizations can also take advantage of IBM’s proven storage virtualization features of IBM Spectrum Virtualize to consolidate and unify storage replication requirements at each site.

IBM Spectrum Virtualize also offers advanced data efficiency features such as thin provisioning, compression and deduplication that can be used along with HyperSwap to minimize your total cost of ownership while maintaining two copies across sites.

HyperSwap is available on all IBM Spectrum Virtualize–based hardware that supports more than one node pair in a cluster, such as Storwize V5000, V7000 and V9000.

Where you can find support

IBM HyperSwap provides continuous availability of data during planned and unplanned outages. If you are looking for a zero-downtime solution for mission critical workloads, IBM Systems Lab Services Storage and Software Defined Infrastructure has helped clients around the world efficiently design, plan, deliver and protect data with superior performance.