The Future of Bollywood Fashion is Cognitive

Fashion is ever-changing. Styles that once seemed evergreen can fade away, and those looks that we thought would never make a comeback suddenly resurface.

As designers, the creative space we must occupy to stay current and relevant is a delicate balance of gradual evolution and radical reinvention.

Inspiration can come from anywhere – an old silhouette seen with new eyes or an extremely popular print reimagined. But when it comes to defining broad themes for a collection, it makes an enormous difference by widening the playing field to unleash our creativity.

Earlier this year, when Falguni and I started working with IBM, the scope of the task we set Watson to tackle was colossal. We asked Watson to analyze hundreds of thousands of images from both the international fashion scene and the fashion history of Bollywood so that we could use it as inspiration to create a line with the theme “The Future of Bollywood Fashion.”

At the time, I remember Falguni saying, “The sheer scale of a project of this size is so daunting that I doubt we would have ever undertaken it by ourselves.”

You can hire people to browse hundreds of blogs and study thousands of images from the runway and fashion archives to understand the trends and draw inspiration, but how many, and for how long? When humans are studying large numbers of images over long periods of time, it becomes difficult to consistently retain the same level of focus, but not with AI. It would have taken our team months on end to give us the sort of results that Watson was able to offer in mere seconds.

We aim to foster an environment in which everyone who is working for us feels like they are an integral part of the creative process and most importantly, that they are having fun doing it. This becomes a big challenge when you assign lengthy, tedious projects to a sizable group of people within your team.

With Watson as Falguni Shane Peacock’s trusty aide, we were able to avoid those routes altogether because we could get dependable and data-driven answers very, very, fast – something the fashion industry completely lacks.

Leveraging the Watson Visual Recognition API, 600,000 publicly-available fashion images from 2006 to 2017 spanning the ‘Big Four’ fashion weeks – London, Paris, Milan and New York— were analyzed to provide us with insights into high-end couture. And for Bollywood fashion trends, IBM Watson on Cloud examined close to 5,000 Bollywood images from various social media sites. In addition,  data from 3,000 fashion-related images from the history of Bollywood, in the form of Bollywood movie posters across four decades – 1970s, 80s, 90s and 2000s were studied. To generate novel prints, the team gathered close to 100,000 print swatches. 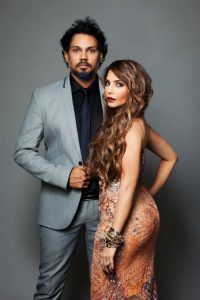 The IBM team provided us with tools to visually browse through color, patterns, and silhouette trends which immensely simplified our research and product development process. The following tools that were made available to us were intuitive, informative, and really helped move the creative process along.

Color predictor: Watsons’s Visual Recognition API across such large number of images helped us identify color trends and dominant colors for fashion seasons, and aided us in predicting the colors for the upcoming seasons.

Visual browse: We used input inspiring images into Watson so we could find dress designs that matched our desired style, pattern, and silhouette, which definitely beats us browsing through all those pictures and trying to make sense of it all!

Pattern generations: This was by far the coolest aspect of Watson. Watson’s analysis on thousands of prints and patterns gives it an intelligence that allows the A.I. to create unique patterns that have never been seen before. We could directly use these cool prints on the collections and for a change, were inspired by a machine!

As we worked on a vision for the future of Bollywood fashion, Falguni and I experimented with different combinations of color, print, and cuts over a few weeks. We finally decided on the exact Watson prints, the trendiest colors of the season and then created three unique dresses as part of our cognitive fashion collection. We are incredibly proud and happy with how the dresses turned out and the standing ovation we received.

Watson let us travel back and forth in time and space at an unbelievable speed, letting us study vast amounts of data for both broad trends, as well as an understanding of the more obscure data, too. We’re looking forward to extending Watson to other parts of the creative process because the future of cognitive couture is looking fabulous!

Building IBM’s Workforce of the Future

Making Blockchain Real for Business with IBM and Hyperledger Fabric