The Ethics of AI in Government

“How was the decision made?” The department’s minister and permanent secretary sat before a select committee looking into a recent tragedy.

“The system made the decision using artificial intelligence,” came the reply.  The decision made was poor and had triggered a catastrophic sequence of events.

“How did the system make the decision?” the chairman persevered.  The minister and permanent secretary looked at each other dumbfounded.  They were unable to explain what had led to the decision that was made because too much trust was being placed in artificial intelligence (AI) without regard for how it came to conclusions.

This hypothetical scenario could play out for real unless due consideration is given to how artificial intelligence should be exploited.  This includes the ethical use of AI, not merely algorithms and technology.  Ethics is about decision making, and the select committee had uncovered the department’s negligence in justifying its actions:  it was unable to explain itself.

Each decision that Government makes in delivering its services to individual citizens has follow on consequences in their lives.  It is unlike the commercial world because there is no option of return or refund.  Ethical decision making is not an exact science, and it is for this reason that the purpose of AI is to augment – not replace – human intelligence;  AI assists people in making decisions.  The judgement necessary is illustrated by a Venn diagram that we originally put together as part of a study I participated in a few years ago on the ethics of analytics. 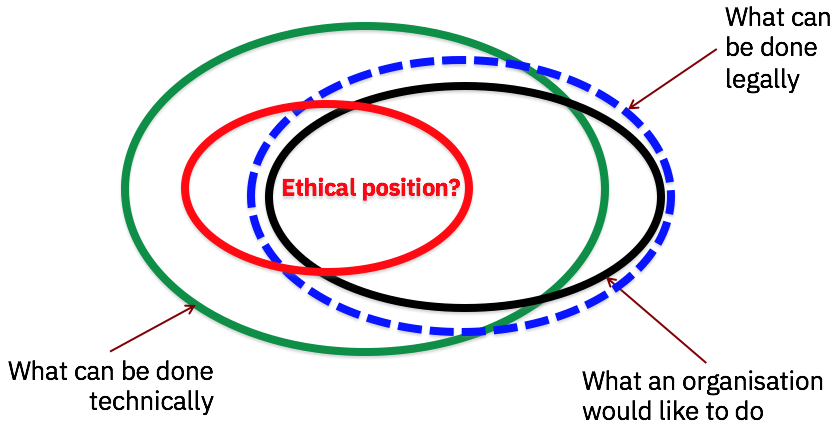 In my example, the department lost public trust.  If artificial intelligence is used to help make important decisions, it must be explainable.  This means having clarity over who trains AI systems, what data was used in that training and, most importantly, what went into the algorithm’s recommendations.  Governments need to understand from technology providers what the AI is doing.  It is easy to generate recommendations and alerts, but harder to understand the extent to which you should trust them and to measure the performance of the models.

AI offers measurable improvements to users, even though ambiguity in what is the best or right decision will remain.  An example is tackling bias in decision making.  IBM has made the largest annotated data set available to detect and address bias in facial analysis.

Then last month, IBM released the first comprehensive bias mitigation toolkit, AI Fairness 360.  It increases fairness in machine learning algorithms by offering research to industry practitioners.  Its bias mitigation algorithms can act at the data set, classifier or predictions stages.  The toolkit can first be used to measure bias and assess against legal or policy tolerances by exposing factors and weights counting for and against individual decisions, and to identify parts of a data set that might be the source of unfair outcomes.  Furthermore, IBM’s new service captures meta data across the lifecycle of AI systems.  Provenance information ensures complete records are maintained to allow Governments to sustain compliance with regulations such as GDPR.

Clearly, some of the responsibilities for appropriate use of AI fall to developers.  The systems they build must be calibrated, and continuous monitoring undertaken to ensure that the probabilities generated are in line with expectations.  Ethical systems are built so that users are able to perceive and detect when they are using AI, and understand its decision process.

A subtler, but important ethical concern for Government is in the terms and condition associated with the use of AI technologies, especially cloud services.  IBM believes that data and insights belong to their creator.  Our clients are not required to relinquish rights to their data — nor the insights derived from that data — to have the benefits of IBM’s solutions and services.  The owner of the data gets the value.  Therefore, Government data and the insights produced on IBM’s cloud or from IBM’s AI are owned by Government.

Government departments need to be able to explain the decisions that they make to sustain public trust in services.  Using the advantages offer by AI does not change that obligation.  It means that policies governing AI systems must ensure that people understand how a conclusion or recommendation has been reached.  Leaders should form and apply principles for trusted and transparent use of data to govern the application of AI in the public sector.  Find out more about principles for trust and transparency in this article on responsible use of data. 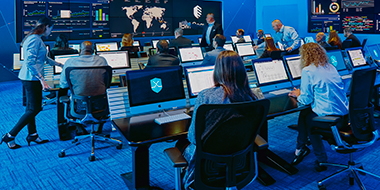 Unlocking the power of data with artificial intelligence to accelerate innovation

Unlocking the power of data with artificial intelligence to accelerate innovation Data is the lifeblood of business – it drives innovation and enhances competitiveness. However, its importance was brought to the fore by the pandemic as lockdowns and social distancing drove digital transformation like never before. Forward-thinking businesses have started to grasp the importance of […] 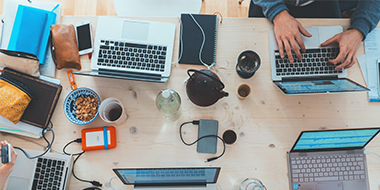 IBM and Adobe: Empowering Creativity Creative leaders and their teams with enterprise-scale content outputs have hit the limits of complexity in creating, managing and optimising their content for a great, personalised customer experience. To empower creative teams to deliver quality at scale and speed, Adobe and IBM have teamed up to bring an end to […] 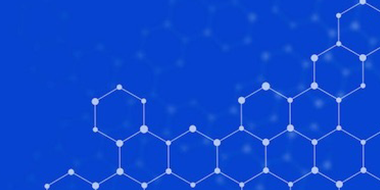 Bringing Together Women in AI

Bringing together women in AI. As part of my commitment to creating a more diverse and inclusive technology landscape, I am having a series of conversations with women who are leading  AI projects in their businesses.  In this episode I speak to Jennifer Turner, Senior Director, Digital Innovation, Strategy and Transactions, EY-Parthenon, and a recent […]