Quantum computing is the most exciting new frontier of information technology. A universal quantum computer promises us more complete knowledge of our environment, down to the molecules that make up everything around us. And much like when the first room-sized computers were turned on in the 1940s, a quantum computer’s full potential is unknown and untapped.

That’s why IBM is announcing the industry’s first commercial program to build a universal quantum computer: we are flipping the switch on something that doesn’t exist today. 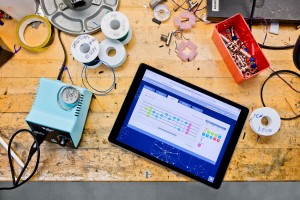 Quantum computing is a term that’s becoming more mainstream, but its complex nature means it’s not well understood beyond quantum physicists. At its core, quantum is a radical new computing model that harnesses the power and rules of nature to address problems that are impractical to solve with today’s systems.

The universal quantum computers IBM has worked toward in more than 35 years of research are the most powerful and general class of quantum computers. Their mojo comes from the quantum bit, or qubit, which leverages quantum effects that are not visible in our daily lives, to explore an exponentially more-powerful computational space, to help solve certain problems that we could not otherwise solve.

Today, the six founding members of the IBM Research Frontiers Institute – Samsung, JSR, Honda, Hitachi Metals, Canon, and Nagase – have set out with us to explore quantum computing applications for their industries. Our new goal is to deliver a universal quantum computer to select early access partners within the next few years.

Because of their exponential power, a universal quantum system with just 50 qubits may be able to perform certain complex calculations at a rate that today’s top multi-Petaflop supercomputers can’t yet emulate, nor can any other class of quantum computers. Our goal is to provide businesses and organizations with access to a new realm of computational power, before unachievable, to solve real-world and societal problems.

Access to the IBM Quantum Experience’s five qubit processor was just the opening volley toward creating a universal quantum computer. The quantum experience was recently upgraded with a simulator capable of handling up to 20 qubits, and a new API that gives users a way to run batches of commands using scripting languages. We see this as the beginning of quantum computer science when engineers and scientists without deep quantum physics expertise can start to develop quantum applications.

And similar to how the IBM Quantum Experience operates on the cloud, solving these problems will be possible because quantum computers will work in concert with classical computers. A classical computer will still do “traditional” things, like crunching big data. But partners in our early access commercial program will also be able to tap into a quantum computer to tackle complex, exponential problems in chemistry, machine learning, and optimization, to address applications ranging from chemistry, to drug discovery, to financial portfolio optimization.

Part of our universal quantum computing roadmap’s success relies on advancing high performance computing systems and semiconductor technologies. Quantum computers, the end of Moore’s Law… these things are not the end of classical computing. Instead, the continued innovations in system design for workload acceleration and software-defined storage enable classical systems to manage vast quantities of data, and to extract meaningful insights from that data. With cognitive infrastructure and quantum systems, we can pair insight from the data we humans have created and collected, with the possibility of exploring the world we don’t have data for, a world which quantum computers can reveal.

Think of it this way: Watson processes the data we’ve collected on existing drugs to help us make better drugs. A quantum computer closely maps how molecules interact to help us form entirely new drugs.

At a conference in 1981 Nobel Laureate Richard Feynman said, in paraphrase, “nature is quantum, and if you want to simulate nature, you better build a quantum computer.” He’s right. As this new program successfully develops increasingly capable universal quantum computers, it will open a new understanding of chemistry to help us develop new building materials, new drugs, and even optimize shipping logistics.

But perhaps even more exciting than what we know quantum computers will do is what we don’t know. With the advent of any very new technology often comes unexpected applications. No one is entirely sure of the full breadth of what a universal quantum computer is capable of. That’s exciting. And that’s what we want to find out.

Lowering the Barriers to Global Trade with Blockchain

How the Move to Cloud Can Drive Enterprise Resiliency