Unlike some of my colleagues in our banking and financial markets teams, I’m no securities expert, but I’ve learned more about securities trading in the past six months than I ever would have thought possible. That’s because I spend many hours on the phone each week with leaders from securities exchanges and financial services companies who are trying to come to grips with blockchain, an ingenious technology that has the potential to transform how trading is done.

Blockchain, which emerged as one of the critical technologies in crypto currencies like Bitcoin, provides a novel way of enabling people to exchange things of value quickly, efficiently, and with minimum risk. 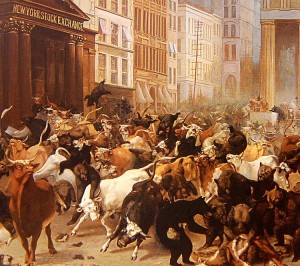 The Bulls and Bears in the Market, by William Holbrook Beard, New York Historical Society

It’s hitting the financial services industry with hurricane force. Just like in the 1990s with the Internet boom, along comes a technology shift that changes the game for business. Startups are determined to strike it rich by disrupting whole industries. Incumbents are faced with a critical choice: disrupt themselves first or risk somebody else doing it to them.

No wonder financial markets firms are scrambling to figure out blockchain.

At IBM, our prescription is straightforward. We believe the tech and business communities should work together to build technology foundations and solutions based on blockchain for use by every industry and adapted to every industry’s unique needs.

That’s why we have joined the Linux Foundation’s open source Hyperledger Project, which has the goal of helping organizations of all kinds build secure blockchains. We have offered nearly 44,000 lines of code to the project, and more is on the way. We’re also opening IBM Garages for blockchain app design and implementation in London, New York, Singapore and Tokyo. In addition, we’re offering blockchain services on our cloud platform.

Securities trading is a priority industry for us, since it’s where change is coming first and fastest. People in the industry are talking about a concept they call T+0, which means same day settlement. The hope is that they’ll be able to use blockchain to strip out the inefficiencies and handoffs that are required to settle a trade so that settlement occurs on the same day as opposed to 2 or 3 days later as it is today, depending on the market.

We’re working with a number of financial services companies, including securities exchanges, on their blockchain projects. One possibility is that we’ll provide an exchange with the whole array of blockchain services to support their core business processes. A second scenario would have us providing services a la carte—such as identity management, consensus and compliance.

We also foresee demand for analytics. Exchanges handle an immense amount of data every day, but, frequently they don’t have the bandwidth to turn it into insights. By providing analytics technologies that tap into data flowing through blockchain networks, we would enable exchanges to spot patterns that would be valuable to them or to members, subscribers, and users. IBM Watson could also come into play, perhaps helping exchanges or other financial services companies to establish the trustworthiness of members or trading partners—perhaps using the Watson Personality Insights function.

Trust is a key issue in the blockchain world.

Among crypto-currency traders, blockchain networks are typically anonymous. You don’t know who you are trading with, but it doesn’t matter because the system assures that currency changes hands exactly as you have agreed it will. The core element of blockchain is a shared digital ledger with rules and contracts built into it. Whenever a transaction is agreed to or completed, an indelible record is created in the ledger for all the parties that are involved to see. The crypto-currency people call theirs a system of “trustless” trust.

Anonymity won’t work for banks and exchanges—or the regulators that watch over them. That’s why we’re working with the financial services industry to create implementations of blockchain where participants in a network are officially trusted or, better word, “permissioned.” Their identities are known and managed, and, therefore, their activities are auditable. Think of it this way: we’re changing some of the genes in blockchain’s DNA to adapt it to the needs of the financial services industry.

Just like we’re working with established financial services companies on blockchain, we’re also collaborating with some of the new fintech startups. We aim to provide them with the foundational underpinnings for their blockchain solutions—both through our work with the Linux Foundation’s Hyperledger Project.

At a time like this in the evolution of a new and potentially world-shaking technology, you place a lot of bets, you forge new relationships and reaffirm older ones, you advance the technology, you experiment, and you see what works.

Amazing things could come of this. For the past few years, so much of the focus for the tech industry and for business has been on systems of interaction—mobile, social and cloud technologies. It seemed like the technologies for systems of record were settled. Not much was changing. Then along comes blockchain and we’re all looking at the world with new eyes. There’s great potential to utterly transform the ways that businesses work together and that people interact with government. Everything is potentially in flux, from banking and airline reservation systems to social security and your interactions with the department of motor vehicles. Day-to-day life is about to get disrupted—in a good way.

IBM has been providing the technological underpinnings for securities trading since shortly after the company got its start in a small office on Broad Street in New York’s financial district in 1911. In those days, traders bought and sold securities standing on the cobblestones of Broad Street. Our Hollerith machine soon became a mainstay of banking by providing mechanical ledgers. Since then, through the mainframe, client-server and Internet eras, IBM has provided technologies that helped drive each wave of automation and innovation in the trading business. Here we go again.

IBM Research is hosting a blockchain workshop in Chicago. If you’d like to learn more visit this Web site.

Nobody likes the prospect of having to get on a computer or pick up a phone and reach out to customer service. Call centers in countries around the world are notorious for long wait times, poor service and high customer churn. In many call centers, even the best employees are forced to dig for answers […]