It is June and the the NBA’s draft looms large. The management and coaching staff of the Toronto Raptors gathers to consider potential draft picks and possible trade scenarios. Their strategy is to select players who will form a cohesive unit. No prima donnas.

In the past, the staff would have gathered in a room lined with whiteboards and moved around magnets representing teams and players. They’d make phone calls to the stats staff if they wanted numbers crunched.

No more. The Raptors’ leaders have moved into their new practice facility, the BioSteel Centre, and within the complex they gather in a special collaboration room. The space was designed with a single purpose in mind: to help them make better decisions concerning talent and teamwork. 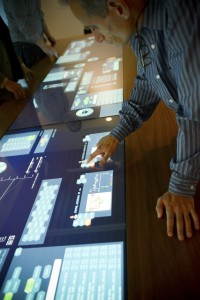 The room bristles with digital technology. Nine large interactive screens are lined up end to end across one wall. In the middle of the room is a long table topped with touch-sensitive screens. Managers and staff, individually or in small groups, can work through potential trade scenarios on screens at the table—calling up information and jotting digital notes about players and their free agency status, teams and their salary caps, etc. A scout at a game can shoot video of a prospect and share it in near real time with the coaches and staff via a smartphone app.

If somebody in the room thinks they have a great idea, they can transfer the information on their table-top screen to the wall display simply by pushing a button on the table. Then everybody can look, comment and manipulate the data. They summon stats instantly–with the touch of a finger.

It’s a new approach to collaboration enabled by interactive and cognitive technologies—with IBM’s Watson at its core. We plan on offering the package of technologies to all sorts of sports teams around the world in the coming months.

The first version, which the Raptors are using, is a cloud-based service that includes three Watson technologies: Tradeoff Analytics, which helps pick an optimal player given a set of criteria the team is looking for; Personality Insights, which uses linguistic analytics to understand a player’s personality based on their social sharing activities; and Alchemy News, which gathers information about players and teams from multiple sources to help the managers assemble more complete profiles. We’ll add more cognitive capabilities in future versions.

Basketball is a great place for us to launch our expansion in sports because the NBA, through their vendor Stats, Inc., gathers an incredible wealth of data for Watson to chew on. In addition to capturing every stat you can imagine, they gather video of every game from a variety of angles enabling them to provide teams with detailed information about every play. They share their data with the teams on an equal basis, so the winners in this competition are the teams that do the best job of mining the data.

I was on the team that developed the original Watson to compete on the TV quiz show Jeopardy! My colleagues and I used game theory to craft strategies that would help Watson beat the two best-ever human players. Until this project I was not a huge basketball fan. (Now I devour everything I can find about the sport.) But the funny thing is that I actually used an insight from basketball strategy to help with my work on game strategy for Jeopardy! When basketball teams are falling far behind toward the end of a game they start fouling aggressively. It’s a high-risk strategy, but it’s the only way they can hope to make up lost ground. We built that strategy into Watson—programming it to take more risks, by buzzing in even when it had lower confidence, if it was falling behind, and, conversely, to become risk-averse if it held a strong lead. The feature helped Watson win.

I excitedly told the Raptors chief statistician, Keith Boyarsky, about this insight when we met, just prior to the project’s inception. Coincidentally, Keith turned out to be a big Jeopardy! fan and we really hit it off. We have been working extensively with Keith and his team throughout the project and it has been a wonderful experience. Undoubtedly the Raptors team wants to get some of this same Watson edge for themselves!

The NBA draft is not far off, and after that trades begin for next year. I hope we can give the Raptors the edge they need to emerge as one of the league’s elite teams. That would be strong evidence that cognitive technologies can make a critical difference for organizations of all kinds.