The identities that make up the lesbian, gay, bisexual, and transgender (LGBT) community stretch far beyond the four letters typically used to represent it. This community is diverse—and has adopted a plus sign to be inclusive of its many identity groups. As the community continues to make space for many different understandings of and labels for sexual orientation and gender identity, its language evolves with it.

Individual LGBT+ lives, families, and experiences are all unique. What brings the LGBT+ community together is less a shared identity and more a shared struggle for acceptance and equality, with each segment of the community experiencing the struggle differently.

In some countries, criminalization continues to force LGBT+ communities to live underground and in the closet. In other places, advocacy and education have spurred significant progress. From legalizing same-sex marriage and adoption to writing equality into their constitutions, more than 150 countries now offer some form of legal protection for LGBT+ people.

45% of lesbian, gay, and bisexual people say their employer discriminates against people of the same sexual orientation.

Globally, there has been a massive uptick in the percentage of people who say same-sex relationships should be accepted by society. According to Pew Research, many countries saw a double-digit increase in positive attitudes toward LGBT+ people between 2002 and 2019. In South Africa and South Korea, acceptance jumped roughly 20 percentage points—and India has seen a 22-point increase since 2014.

This shift in perspective has encouraged more LGBT+ individuals to come out publicly. In February, Gallup reported that the number of Americans who self-identify as LGBT+ hit a new high of 5.6%, up 60% over 2012. Most people in this group (56.4%) identify as bisexual, with 11.3% identifying as transgender.

But even in the wake of big wins, such as the US Supreme Court’s landmark decision that the Civil Rights Act protects gay, lesbian, bisexual, and transgender people from workplace discrimination, a raft of new legislation is putting LGBT+ rights further at risk. The Human Rights Campaign has declared 2021 to be a record-breaking year for anti-LGBT+ legislation in the US, with limiting transgender rights becoming a common wedge issue. By May 2021, more than 250 bills had been introduced in state legislatures across the US, and 18 bills had either been signed into law or were awaiting gubernatorial signature.

To learn more about the identity and experiences of the LGBT+ community, the IBM Institute for Business Value (IBV) in collaboration with Oxford Economics surveyed more than 6,000 United States-based professionals between August 2020 and January 2021, including 700 individuals who self-identified as gay or lesbian (73%) or bisexual (27%).

Although offered as an option in our random, anonymous, double blind survey, none of the respondents explicitly self-identified as non-binary. Therefore, the following data is directionally helpful, but as with any studies missing key populations, the analysis and applicability should be taken in this context and not treated as proxy for any subset of the LGBT+ population in isolation.

While the nuances of gender identity were not included in the initial survey, we did want to tell a comprehensive story about the lived experience of LGBT+ people. To capture valuable insights from individuals across this diverse community, the IBV teamed up with Out & Equal and Workplace Pride to host a Global LGBT+ Innovation Jam on April 13 and 14, 2021.

87% of Jammers agree: My company or organization should take a more assertive public position on LGBT+ inclusion and belonging.

During this Jam event, more than 2,000 business leaders, subject matter experts, and thought leaders—LGBT+ and allies—came together online to discuss the unique needs within the LGBT+ community and identity overarching efforts that can increase inclusion and belonging. Jam participants claimed identities across the spectrum, with 43% identifying as gay or lesbian, 33% as non-LGBT+, 9% as bisexual, and 8% as queer. 5.6% of participants identified as non-binary. Digital Jam discussions covered a broad swathe of topics, ranging from the ways technology can reduce bias to how companies can support the mental health of LGBT+ individuals.

This paper summarizes the findings of the survey and the Jam, both of which offer deep insights from the LGBT+ community about their personal experiences, the obstacles they face at work and in society—and how organizations can redress them. However, in the interest of clarity, we will use different acronyms to refer to the study population (LGB) and the Jam participants and broader community (LGBT+).

The future of LGBT+ inclusion

The IBV LGB survey offers a unique snapshot of the lesbian, gay, and bisexual experience across the professional spectrum—including senior executives, senior and junior managers, and entrepreneurs. It explores their ongoing experience with discrimination and success—and how their different identities intersect.

Unequal outcomes: More than half of LGBT+ people of color feel people who share their identities are less successful.

Compared to the general US population, the group who has all three characteristics (race, gender, sexual orientation) as me is less or more successful? 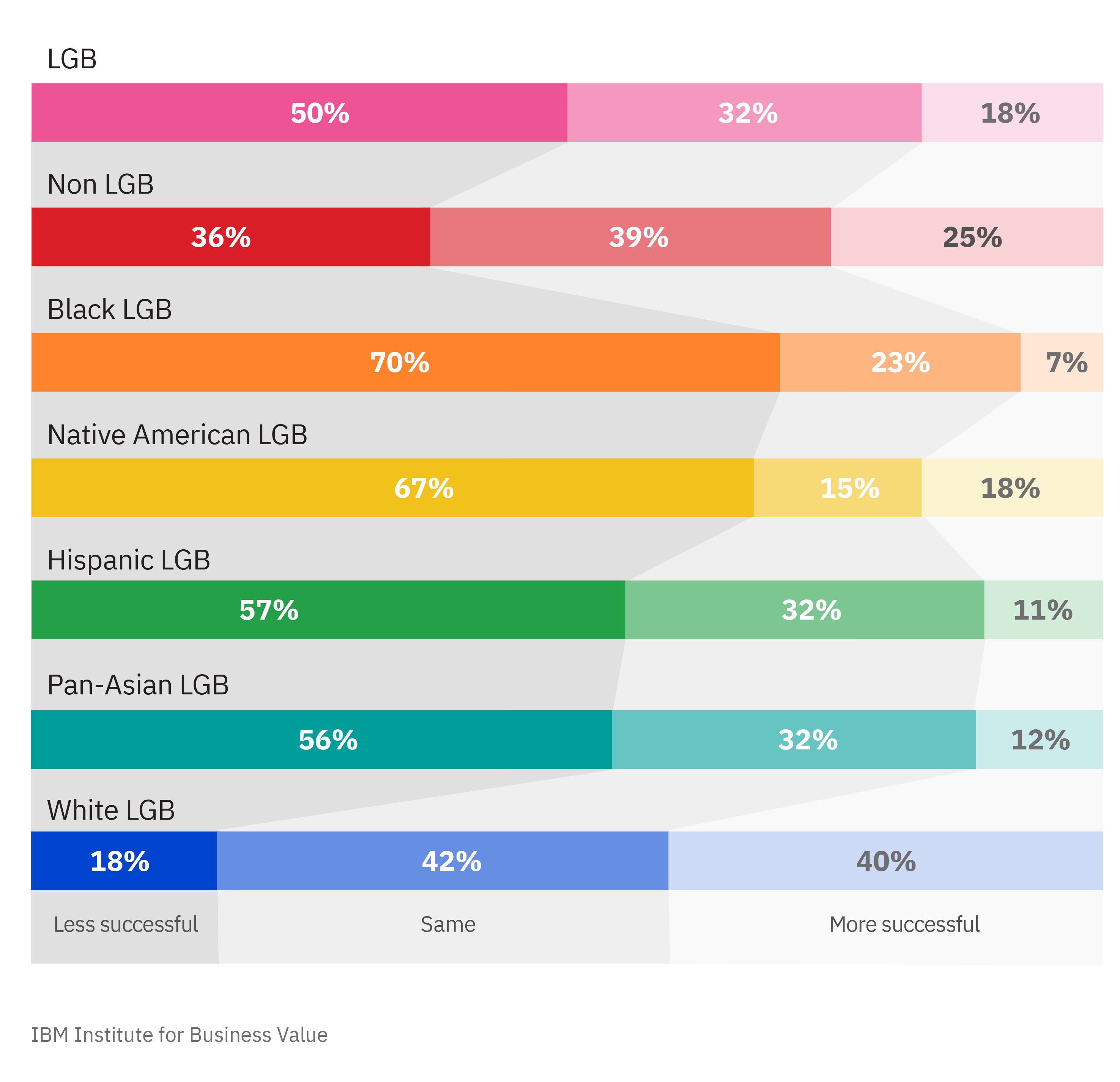 Nearly half (45%) of LGB people say their employer discriminates against people of the same sexual orientation. Almost the same portion of non-LGB respondents (43%) agree that their employer discriminates against LGB people. Given this reality of sustained discrimination—despite recent progress—it’s unsurprising that 63% of LGB individuals surveyed believe those who share their sexual orientation are less successful than the US population in general. The IBV survey results support this conclusion, at least with regard to LGB representation at the corporate leadership level. We found that only 7% of senior executives in the US identify as LGB.

Roughly 2 in 3 LGB people say they’ve been disadvantaged due to their identity, compared with 57% of their non-LGB peers.

And Jammer insights support this narrative. The stories they shared were compelling and, at times, heart-breaking. As a group, Jammers weighed the desire to live authentically and pave a path for future generations against the need to ensure the safety and success of individuals in the present. They discussed how to build bridges and open doors, and explored the generational shift taking place as Millennials and Gen Z become a larger portion of the workforce—as well as how leaders need to adapt.

By pairing the results of the IBV LGB survey with insights from the LGBT+ Jam, we identified 3 ways organizations can evolve by embracing LGBT+ diversity.

Read the full report to see how organizations can create a safe, supportive workplace for people of all identities.

Asian American inclusion in the workplace

Find out what organizations—and all of us—can do to reduce bias in the workplace and society.

After years of keeping silent, many Black executives are sharing—for the first time—their experiences of racism with their co-workers.

This study examines the status of women in business, and outlines where progress has—and hasn’t—been made over the past two years.

Our new data shows that while the pipeline has expanded for some roles, it has continued to shrink for the most senior roles.