Zithulele Hospital is a medical marvel. It provides quality acute and primary care for a community of 130,000 people scattered across part of the rural Eastern Cape of South Africa with just 146 beds and 13 fulltime doctors. Zithulele’s situation illustrates one of the major public health challenges in the world today: there aren’t enough doctors in rural communities. “We work hard to provide both accessibility and quality healthcare, but it’s a major day-to-day challenge,” says Dr. Ben Gaunt, manager of clinical operations at the hospital. 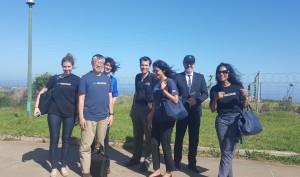 That challenge was also the focus of a six-member team of IBMers who visited the hospital last fall during a three-week engagement in South Africa. Theirs was one of two pilot projects that helped shape a major new corporate social responsibility initiative, IBM Health Corps, which is aimed at addressing global public health problems. The other pilot addressed physical activity and shortened lifespans in Calderdale, a community in West Yorkshire, the United Kingdom.

Under the Health Corps program, IBM plans to dispatch interdisciplinary teams to up to five destinations around the world starting in 2016—and more in subsequent years. Health Corps is modeled on the company’s Corporate Service Corps and Smarter Cities Challenge, pro bono programs that send teams of IBMers to help communities solve problems that they choose. The focus this time is on health—improving the quality of healthcare, increasing access to care, and addressing the social and environmental determinants of health, including clean water, safe transportation and access to healthy food. Technology solutions will be front and center–including IBM Watson cognitive technologies.

IBM Health Corps is open to national and local health organizations, non-profits, clinics, hospitals and public sector public-sector organizations. Applications may be submitted to IBM through April 20 by visiting www.ibmhealthcorps.org. IBMers who are interested in participating can learn more and sign up here.

The IBM Health Corps plans a third pilot starting in May in Washington, D.C. Working with Unity Health Care, a primary healthcare provider for more than 100,000 underserved residents through 26 local clinics, the IBM team will create a strategy for clinics that combines both primary and behavioral care within one team.

The IBMers who participated in the two pilots last fall came from all over the globe and brought with them a wide range of technology and problem-solving skills. In both places, they found enthusiastic hosts open to new ideas and willing to use data to solve persistent problems. “Our task is to show local leaders insights using their own data that help them imagine new possibilities,” says Joel Mangan, an IBM program manager who organized the pilots. 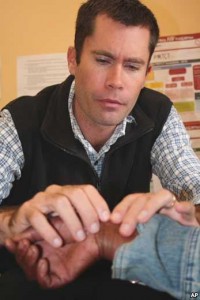 For members of the South Africa team, the most affecting moment came when they met with Dr. Gaunt, who grew up in privilege in Cape Town but chose to serve a disadvantaged community. He has been there for 10 years. They were impressed with the clean and orderly hospital—where color-coded rooms tell patients and their families how long they will have to wait to see a doctor or nurse. “In a situation like theirs, every employee counts,” says Alexis Casaceli, a consultant for the IBM Watson Health organization from New York City.

Making every clinician count was the focus of the team’s efforts in South Africa. They collaborated with Africa Health Placements, a non-profit organization in Johannesburg, which works with South Africa’s Department of Health to place clinicians in the country’s rural hospitals and clinics.

“The critical need we’re trying to address is getting the right worker to the right location in the right job,” says Meenal Pore, who grew up in England and is now on staff at IBM Research in Kenya. She was one of the researchers who worked with health authorities in Sierra Leone last year to help battle Ebola—creating a system for gathering information about the outbreak directly from citizens.

Today, South Africa’s health department gathers data about hospital and clinic staffing by sending staffers out into the hinterlands to meet with hospital administrators—collecting information manually using a long paper form. The information later has to be typed into a computer system.

After meetings with stakeholders, the IBM team produced a prototype mobile app that enables hospital administrators themselves to gather and input key facts and email them to government health officials with push of a button. For government officials, the app provides visualization tools and analytics that help them understand staffing situations in particular facilities and across regions—so they can make better hiring and staffing decisions, decrease patient wait times, and provide more equitable care for communities in need. The information could also be used one day to make predictions about seasonal or disease outbreak-driven variations in staffing needs so actions can be taken to avert patient suffering and save lives.

Under the guidance of Priscilla Rogers and Meenal Pore, from the IBM Research Australia and Africa Labs, a team from the Australia Lab helped them develop the application prototype in a matter of days—an example of how IBM can quickly tap into talented people from its 12 research labs on 10 continents to solve problems. Africa Health Placements, IBM and the South African Department of Health now plan to pilot the technology in one district.

During her time in South Africa, one of the IBMers witnessed the country’s healthcare system at its best when she fell ill and made an emergency visit to a Johannesburg hospital. She saw a doctor within 10 minutes. The contrast with the rural Cape, where people sometimes travel for a day to get to a doctor, made her appreciate the challenges that public health officials there face. It was gratifying to be able to do something for them that mattered. “We were able to empower people on the front lines and make a real impact,” she says.

In South Africa, according to Dr. Gaunt, government officials and hospital administrators are beginning to recognize the value of using data to improve operations and inform care decisions. At Zithulele, he has been gathering and analyzing data about treatment outcomes for nearly a decade. And it has made a difference. For instance, he tracked maternal and child mortality, and, based on the data, the hospital has continually adjusted its approach to care. One result: a 50 percent decline in prenatal deaths. “You can’t make good judgments without good data,” says Dr. Gaunt. 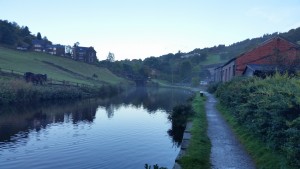 Getting hold of good data was also critical for the governing council in Calderdale, a borough in West Yorkshire, U.K. As in the rest of the country, Calderdale has high levels of obesity. Officials knew that a lack of physical activity contributes to shorter life expectancies in the area.

They asked the IBM team to help them assess the situation and come up with proposals for improving the health and quality of life of residents.

The team searched for novel ways of assessing the level and types of physical activity in the community. They focused on the notes that social workers type into their computers when they meet in the office or in homes with older residents and foster children who receive or apply for social services. Using IBM Watson technologies, they searched for information (with no names attached) that would signal physical activity, or the lack thereof, such as references to canes, walkers or football (soccer). And they found plenty of it—enough to help local officials begin to design fitness programs appropriate for the situation.

“They didn’t think they had the healthcare data they needed, but we showed that that they really did have it—and a way to get at it,” says Steve Welch, a distinguished engineer focusing on evidence discovery systems for IBM Watson. 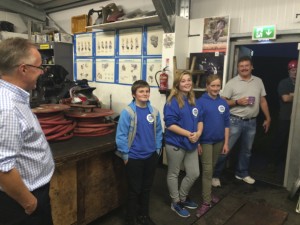 A visit to a Calderdale workplace

But the team also discovered that an essential part of understanding a complex problem is walking around and talking to people. They visited rec centers, gyms, and social centers—a number of them in formerly abandoned buildings that community leaders had converted for these purposes. They found that the infrequency of public bus service in the evenings was a deterrent to physical activity, since it takes a long time for people to get to and from gyms and clubs. They also discovered barriers to exercise that could be removed fairly easily: For instance, young woman of a particular religious faith can’t exercise in the presence of men, but if you reserve a rec center just for them at particular times, they would love to run and play games.

Two of the IBMers, David Clarkson and Tim Pavlick, returned to Calderdale in December to help the borough council move ahead with their recommendations. IBM Health Corps in some cases will provide follow up support as needed for particular projects and organizations. 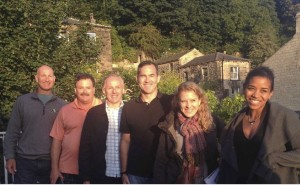 The experiences that the IBMers had in the U.K. and South Africa left them feeling empowered to serve as catalysts for change—not just on these assignments but in their own communities.

One of the IBMers on the UK deployment, Dejan Radeka, a software architect for IBM Watson, drew an important lesson from the Health Corps program that he didn’t expect—about the importance of optimism and engagement. Back home, he urged his three kids, two in college and one in high school, not to shy away from big social problems. “I told them, ‘Look for ways to work on these problems locally, in a community. Put yourself out there and try to make a difference. Because you can.’”

Cognitive Storytelling in the 4th Dimension 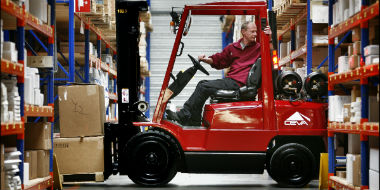 CEVA is a multi-billion dollar global supply chain management company that works with some of the busiest retailers in the business. We’re responsible for everything from contract logistics to freight management, packing and shipping, and all on a global scale. Our business is much more than simply moving things from A to B. We operate […]

The CDO: Helping to Harness the Power of Data

Data used to be viewed by businesses as exhaust — a necessary but relatively useless output of projects that became a nuisance to store and maintain. Advances in analytical, and more recently cognitive, technology have changed that mindset for good. Data is now an asset that can be applied to benefit all aspects of an […] 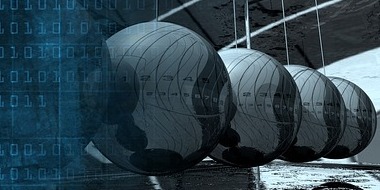 The goal of data visualization is to help explain complex data-driven trends, patterns, and correlations quickly and easily through imagery. And while traditional methods of data visualization have focused on interactive graphics, an exciting new trend is emerging that captures the movement of data in video. In my work at IBM’s Cognitive Visualization Lab, I […]