IBM researcher Jens Ammann shows the scaling of the technology today and the future based on the results of THRIVE.

Can silica gel desiccant packs, often found in shoe boxes and electronics, be the answer to our energy challenges for buildings? A four-year project proves yes, sort of.

According to the European Commission, heating and cooling in buildings and industry accounts for half of the EU’s energy consumption, and fossil fuels generate 84 percent of this heating and cooling. The sector is expected to play a crucial role in CO2 emissions reduction to meet the EU’s climate goals by 2050. At the same time, the amount of heat wasted from industrial processes and buildings in the EU, including data centers, is estimated to cover the EU’s entire heating needs in residential and tertiary buildings.

What is waste heat?

A few examples of waste heat include the heat that escapes from a home through the chimney, the heat that escapes from a car through the exhaust, and the hot air or water discarded from a kitchen stove, shower, dishwasher, washing machine or clothing dryer. In total, these waste heat flows are comparable to the total amount of electricity consumed by residential households.

In industrial processes, waste heat is mainly produced by power plants, combustion processes and manufacturing equipment. Overall, about 70 percent of all energy produced ends up as waste heat.

Often, this waste heat cannot be utilized because its temperature is unsuitable and it can be challenging to capture. Therefore, there is a demand for heat conversion technology in order to access the enormous potential of this essentially “free” heat. And if that wasn’t challenging enough, this technology should also have minimal electricity consumption in order to alleviate the burden on the  grid, which is associated with daily and seasonal variations in heating and cooling demand. 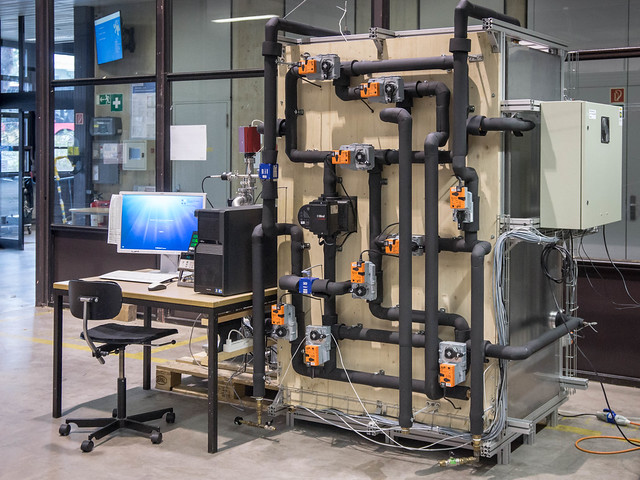 Four years ago, scientists from IBM Research – Zurich, University of Applied Sciences Rapperswil (HSR), Empa, ETH Zurich, the School of Management and Engineering Vaud (HEIG-VD), Paul Scherrer Institute (PSI), and a number of additional collaborators teamed up to address this problem and came together in a project called THRIVE (Thermally Driven Heat Pumps for Substitution of Electricity and Fossil Fuels). The research focused on adsorption heat pump (AdHP) technology, which relies on the use of adsorbent materials like silica gel, well known from those small “Do Not Eat” packs we often find in packaged goods.

Why silica gel? While it often gets tossed in the trash, it’s actually a remarkable substance which can adsorb 40 percent of its own weight in moisture from its surroundings. In doing so, it produces a kind of suction effect that can be used to pump heat much like a conventional air conditioner, but without using electricity. One application of this technology is in data centers to harness waste heat from hot-water cooled high-performance servers to produce cool air to cool power supplies and data storage in the same data center, essentially enabling data centers to cool themselves with their own waste heat.

The results are in

On 8 November, after 47 months of research, we reported our final results.

Besides cooling data centers and other industrial processes HEIG-VD identified promising applications for AdHPs to augment efficiency and capacity in district heating grids as well as lower emissions and energy costs for households. Based on the heating and cooling potentials of AdHPs in four such application scenarios, PSI projected 4-9% lower total energy use in 2050 for the stationary energy sector in Switzerland of AdHPs making use of available waste heat for industries and households, which according to the Paul Scherrer Institute (PSI) have the potential for 3-6% lower total energy use in 2050 in Switzerland. 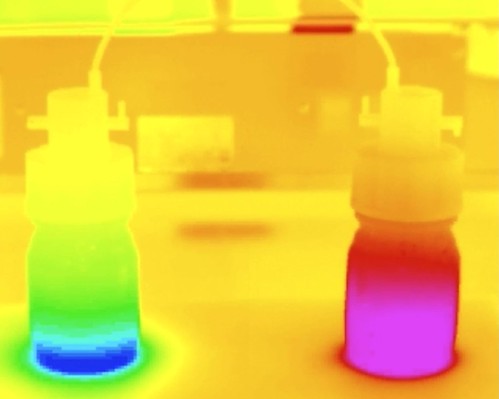 A demonstration with an infrared camera to show the temperature changes of a heat pump.

Instead of silica gel, Empa scientists developed a new type of monolithic activated carbon adsorbent, similar to charcoal, that can be molded and machined into arbitrary shapes to fit into heat exchangers for AdHPs. The material provided a 3.8x higher cooling power per unit mass compared to silica gel for regeneration by waste heat at 60°C.

Further, scientists from IBM Research and ETH Zurich developed new methods to characterize adsorbents in action and used them to reveal the rate-limiting bottleneck in state-of-the-art adsorption heat exchangers with just a few cm2 of material. A framework to predict the geometry of optimally shaped adsorbents was developed, and adsorbent coatings were structured accordingly to provide a threefold improvement in adsorption rate compared to unstructured coatings. These structured adsorbents are capable of supporting a cooling power of 5 kW for each m2 of adsorption heat exchanger area. 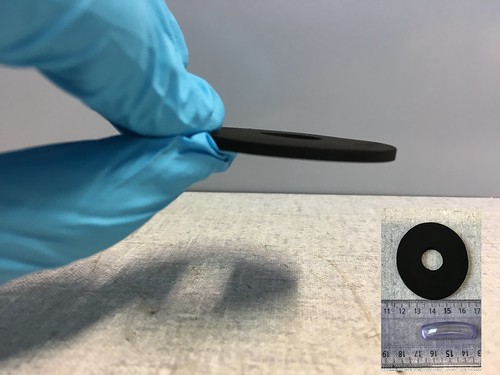 Together, materials and structural improvements can enhance the power density of adsorption heat exchangers by up to a factor of 10. This translates to substantially reduced cost of future AdHPs, making them overall economically, technologically and environmentally superior to other approaches for many applications

To prove that the approach also works at larger scale, HSR scientists built a test rig equipped with a weighing scale in vacuum, capable of characterizing adsorption heat exchangers that produce a cooling power of up to 1.5 kW. For even larger systems, they also built a four-chamber adsorption heat pump system that delivers up to 10 kW of cooling power – that would meet the typical air-conditioning requirements of a single-family home in warm climates. And finally, we developed a framework to design high-performance adsorption heat exchangers  for industries with different requirements. This compact AdHP technology is being further developed for data center cooling and a follow-up project is already underway in which AdHPs are evaluated as heat transformers in thermal grids. Further promising applications of compact AdHPs are for thermal management in cars and for gas separation, such as CO2 capture – now that’s a multi-pronged approach to improve energy efficiency, reduce cost and combat climate change.

THRIVE is a collaborative project realized by an interdisciplinary team of partners including IBM Research – Zurich, the Hochschule für Technik Rapperswil, Empa, ETH Zurich, HEIG-VD, PSI and a number of industrial collaborators. This research project is part of the National Research Program “Energy Turnaround” (NRP 70) of the Swiss National Science Foundation (SNSF). Further information on the National Research Program can be found at www.nrp70.ch.

Evolving Speech and AI as the Window into Mental Health

The Pockels Effect on Silicon: A New Material for Ultra-Fast Data Transfer