The researchers used PCM devices made from a germanium antimony telluride alloy, which is stacked and sandwiched between two electrodes.

“In-memory computing” or “computational memory” is an emerging concept that uses the physical properties of memory devices for both storing and processing information. This is counter to current von Neumann systems and devices, such as standard desktop computers, laptops and even cellphones, which shuttle data back and forth between memory and the computing unit, thus making them slower and less energy efficient.

Today, IBM Research is announcing that its scientists have demonstrated that an unsupervised machine-learning algorithm, running on one million phase change memory (PCM) devices, successfully found temporal correlations in unknown data streams. When compared to state-of-the-art classical computers, this prototype technology is expected to yield 200x improvements in both speed and energy efficiency, making it highly suitable for enabling ultra-dense, low-power, and massively-parallel computing systems for applications in AI.

“This is an important step forward in our research of the physics of AI, which explores new hardware materials, devices and architectures,” says Dr. Evangelos Eleftheriou, an IBM Fellow and co-author of the paper.

The researchers used PCM devices made from a germanium antimony telluride alloy, which is stacked and sandwiched between two electrodes. When the scientists apply a tiny electric current to the material, they heat it, which alters its state from amorphous (with a disordered atomic arrangement) to crystalline (with an ordered atomic configuration). The IBM researchers have used the crystallization dynamics to perform computation in place.

“This is an important step forward in our research of the physics of AI, which explores new hardware materials, devices and architectures,” says Dr. Evangelos Eleftheriou, an IBM Fellow and co-author of the paper. “As the CMOS scaling laws break down because of technological limits, a radical departure from the processor-memory dichotomy is needed to circumvent the limitations of today’s computers. Given the simplicity, high speed and low energy of our in-memory computing approach, it’s remarkable that our results are so similar to our benchmark classical approach run on a von Neumann computer.”

The details are explained in their paper appearing today in the peer-review journal Nature Communications. To demonstrate the technology, the authors chose two time-based examples and compared their results with traditional machine-learning methods such as k-means clustering: 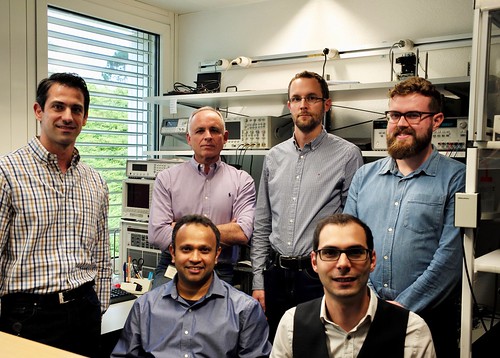 “Memory has so far been viewed as a place where we merely store information. But in this work, we conclusively show how we can exploit the physics of these memory devices to also perform a rather high-level computational primitive. The result of the computation is also stored in the memory devices, and in this sense the concept is loosely inspired by how the brain computes.” said Dr. Abu Sebastian, exploratory memory and cognitive technologies scientist, IBM Research and lead author of the paper. He also leads a European Research Council funded project on this topic. Follow him on Twitter @abuseb.

The IBM scientists will be presenting yet another application of in-memory computing at the IEDM conference in December this year.