(7 April, UPDATE: the paper is featured on the cover of the April issue of Nature Nanotechnology). A few weeks ago IBM released its annual five predictions for the next five years based on this theme. IBM scientists in Zurich are making a good argument to add a sixth prediction with their latest scientific achievement – imaging some of the tiniest objects known to science.

While not household names, molecules including pentacene, olympicene, hexabenzocoronene and cephalandole A are all microscopic molecules which are traditionally represented using 2D structural stick models – think back to your high school chemistry class.

But thanks to a microscopy technique published by the IBM scientists in 2009, physicists, biologists and chemists around the world can now image these molecules with remarkable clarity and precision, in some cases for the first time, decades after they were first theorized allowing them to study and manipulate with incredible precision.

David Fox, University of Warwick, explains “For chemists it is amazing to be able to see individual molecules in such high resolution, especially unusual or highly reactive ones. It is the best way to confirm their structure.” 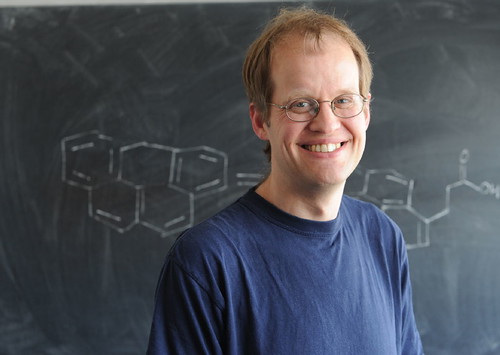 Prof. David Fox, University of Warwick, first collaborated with IBM Research back in 2012.

In addition to imaging, the IBM team, which includes two European Research Council (ERC) grant winners, Leo Gross and Gerhard Meyer, is also able to manipulate molecules to cause chemical reactions so molecules can be synthesized from adsorbed precursor molecules.

For example, nearly one year ago in collaboration with CiQUS at the University of Santiago de Compostela, the scientists triggered and observed a fascinating molecular rearrangement reaction known as a Bergman cyclisation and the year before that they studied and visualized arynes, a family of highly-reactive short-lived molecules which was first suggested 115 years ago — proving that they do in fact exist. And now, they are doing it again.

Appearing today in Nature Nanotechnology, IBM scientists in collaboration with chemists at the University of Warwick have synthesized and characterized a tricky molecule called triangulene, also known as Clar’s hydrocarbon, which was first hypothesized in 1953.

Anish Mistry, University of Warwick continues, “Chemists have always thought that triangulene would be too unstable to isolate. Building on our previous olympicene collaboration, we have added an extra ring to the molecule, and an extra level of complexity to the science, but have managed to make a previously impossible molecule with potentially really interesting properties.”

First author on the paper, IBM researcher, Niko Pavliček comments, “In this work, we used our atomic manipulation technique from the aryne and Bergman papers to generate triangulene, which had never been synthesized before. It’s a challenging molecule because it’s highly reactive, but it’s also particularly interesting because of its magnetic properties.”

As they have demonstrated in previous papers, IBM scientists use a unique combined scanning tunneling microscope (STM) and atomic force microscope (AFM), both invented by former IBM scientists in the 1980s and recognized with the Nobel and Kavli Prizes, respectively.

In their latest research the sharp tip of the combined STM/AFM was used to remove two hydrogen atoms from the precursor molecule. The STM takes its measurement by quantum mechanical tunneling of electrons between a tip brought very close to a sample surface and applying a voltage between them. At appropriately high voltage, the ‘tunneling electrons’ can induce the removal of the specific bonds within the precursor molecule. The product molecule can then be characterized by its molecular orbitals when imaging at milder voltages.

These measurements, combined with density functional theory calculations, confirmed that triangulene keeps it free molecules’ properties on the surface.

The team also used the AFM, with a tip terminated with a single carbon monoxide molecule, to resolve or image the planar molecule with its six fused benzene rings, which appear in a symmetric triangle, for the first time. The results produced some pleasant surprises. It is exactly these unpaired electrons, which make the molecule interesting. In classical physics, a charged particle moving in space possesses angular momentum and produces a magnetic field around it. In quantum mechanics, every particle – moving in space or not – possesses an additional intrinsic angular momentum, which is called their ‘spin’. In most conventional hydrocarbons, electrons are always paired and the effect of their spins cancels. But in molecules like triangulene, the spin of the unpaired electrons leads to magnetism on the molecular scale.

The authors believe that beyond just the science there are also several interesting applications for this work.

Pavliček explains, “Triangulene-like segments incorporated into graphene nanoribbons have been suggested as an elegant way to design organic spintronic devices.”

Graphene nanoribbons are being researched for applications in nanocomposites materials, which are very strong and light. The field of spintronics is being studied by groups around the world, including at IBM, for information storage and processing.

Pavliček continues, “We could also demonstrate that its magnetism survives on xenon or sodium chloride surfaces. However, we cannot get a detailed picture of its magnetic state and possible excitations with our microscope (which lacks a magnetic field), so there is plenty to explore and discover for other groups.”

Some of this research is being conducted under a new collaborative consortium IBM has launched called the IBM Research Frontiers Institute. Within this framework members of the Institute jointly develop and share ground-breaking technologies and explore their business implications.

The research was also partially funded by the European Commission under the H2020 PAMS and ITN QTea projects and ERC grants CEMAS and AMSEL.

A cognitive in-car companion to help us enjoy the journey