In order to celebrate the great achievements accomplished by the late Dr. Heinrich Rohrer, Nobel Laureate and IBM Fellow and to further promote progress in research and development in the field of nanoscience and nanotechnology, an international prize was named after him in 2013 by The Surface Science Society of Japan (SSSJ) in collaboration with IBM Research – Zurich, the Swiss Embassy in Japan and his wife Rose-Marie.

Dr. Rohrer was one of two inventors of the scanning tunneling microscope, which opened the world to nanotechnology.

The Heinrich Rohrer Medal is composed of the Grand Medal, which goes to researchers who have made distinguished achievements in the field of nanoscience and nanotechnology based on surface science and the Rising Medal, which goes to researchers 37 years old or younger who have made outstanding results and are expected to continue to play active roles in the field. The Medal includes cash prizes and will be awarded every three years, at The International Symposium on Surface Science (ISSS) organized by SSSJ next scheduled in November 2017.
The winner of the first Heinrich Rohrer Grand Medal is Roland Wiesendanger, Professor at the University of Hamburg, Germany for his pioneering and ground-breaking achievements on spin-resolved scanning tunneling microscopy and spectroscopy, bringing about very deep insights in spin-related properties of materials at atomic scale.

After receiving their medals last night in Japan they answered a few questions.

Question: As simple as possible, can you please explain your area of research?

Roland Wiesendanger (RW): The understanding of magnetism at the ultimate, atomic length scale is one of the current frontiers in solid state physics. It is a key to future applications in spin electronics and the highest density of magnetic data storage. Spin-polarized scanning tunneling microscopy and spectroscopy are powerful tools to access magnetic phenomena on a scale all the way down to the very atoms. During the past two decades a large variety of surprising magnetic structures were discovered by spin-polarized STM. Competing magnetic interactions effective at the atomic length scale give rise to unexpected ordered structures of great complexity in monolayers of magnetic atoms as well as in artificially created nanostructures built up atom-by-atom. Even the flow of spin-polarized currents through individual molecules could be studied with sub-molecular spatial resolution by spin-polarized STM.

Yoshiaki Sugimoto (YS): Everything is made of atoms, and therefore various properties of  materials can be attributed to constituent elements and their  arrangement in nano-meter scale.  So, the techniques to investigate various materials with atomic scale  are are required.  Furthermore, the ability to assemble nanostructures with unique and  specific properties is a key technology for developing the next  generation devices.  For this to happen several major successes need to happen and they are anticipated through the bottom-up approach:  an attempt to create such nano-devices from the atomic or molecular level  instead of miniaturizing from the macroscopic world.  In the bottom-up approach, the ultimate limit is to fabricate  artificial nanostructures on surfaces by manipulating single  atoms or molecules one by one.  In our laboratory, we are developing such atom manipulation  techniques as well as chemical identification and local characterization techniques using scanning probe microscopy (SPM).

Jan Hugo Dil (JHD): My research aims at understanding the role that the spin of the electron plays in many novel materials. I especially focus on how this intrinsic magnetic moment of the electron is coupled to the path the electron takes in the solid; in technical terms spin-orbit coupling. This coupling can create spin-polarised electron currents at the surface or interface of a material, where the electrons that go to the right have one spin direction and those going to the left have the opposite spin direction. Furthermore, spin-orbit coupling can be used to change

the spin of an electron that passes through the material in a controlled way and even to switch the magnetic state of a small magnet. Such effects and possibilities are very promising to use the spin of the electron instead of its charge to transport and control information, which is the aim of so-called spintronics. In our research we have been able to create a basic model of what determines the magnitude of these effects and we have found several materials with promising properties for spintronics.

Question: What does winning this award mean to you? 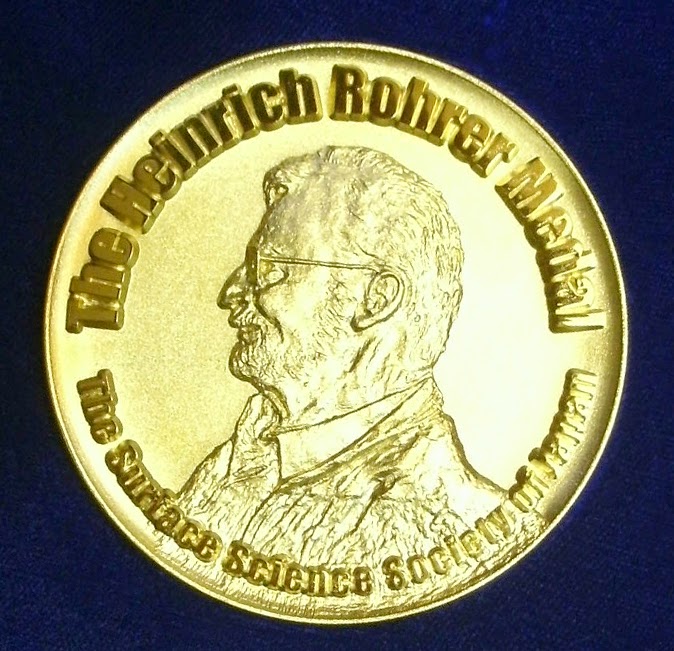 RW: As a young researcher working at the University of Basel in the 80s, I was greatly influenced by Heinrich Rohrer’s way of thinking. He always encouraged young researchers to find their own research topics guided by novelty and expected impact – “What would change if it could be done?” was one of the important questions raised him in order to force research activities into a meaningful direction. Right from the early days of the development of the spin-polarized STM technique I received strong encouragement by Prof. Rohrer which continued after I moved to the University of Hamburg.

YS: I am honored to receive the Heinrich Rohrer medal.   This award is important not only for me, but also the field of atomic force microscopy (AFM).    The AFM field is still growing and I hope that this award further promotes the development and  application of AFM techniques.

JHD:  Winning this award means that the hard work that my co-workers and I have invested in this research is recognized and it is a strong motivation to continue line of work. I am too young to have had the time to directly interact with Heinrich Rohrer, but I am sure I will be speaking for many others when stating that the work he has done at the IBM Research lab in Zurich has been inspiring and has placed this research center even more firmly on the scientific map. As a side note, when I moved to Zurich I lived in the small town of Kilchberg and I would often walk or run uphill past the IBM lab, which is located across the street from a farm. For me this lab still stands for a place where science can be conducted at very high levels away from the hustle of the standard academic environment.

Question: What’s next for your research?

YS: We are creating nanoclusters composed of several atoms based on  chemical identification and atom manipulation techniques.  We then investigate the properties of those clusters by AFM and STM.  It is found that some of clusters composed of semiconductor atoms show switching behaviors. The switches work by carrier injection from the tip as well as interaction force with the tip.  In future, our research will lead to realization of atomic-level devices,  whose operating principles are based on quantum mechanics.  It is hoped that in the next decade, by applying their atom manipulation techniques to device fabrication, atomic-level quantum devices such as solid state quantum computers will become a reality.   We are also developing new systems to achieve higher spatial resolution and higher functionality, such as friction measurement,  spin resolution and time resolution.

JHD:  Besides the continuing search for materials with even better and more exotic spin properties, my plan is to apply everything we have learned from our research in the past years to another class of materials, such as the high temperature superconductors — the other remarkable Nobel Prize discovery at IBM Research – Zurich.