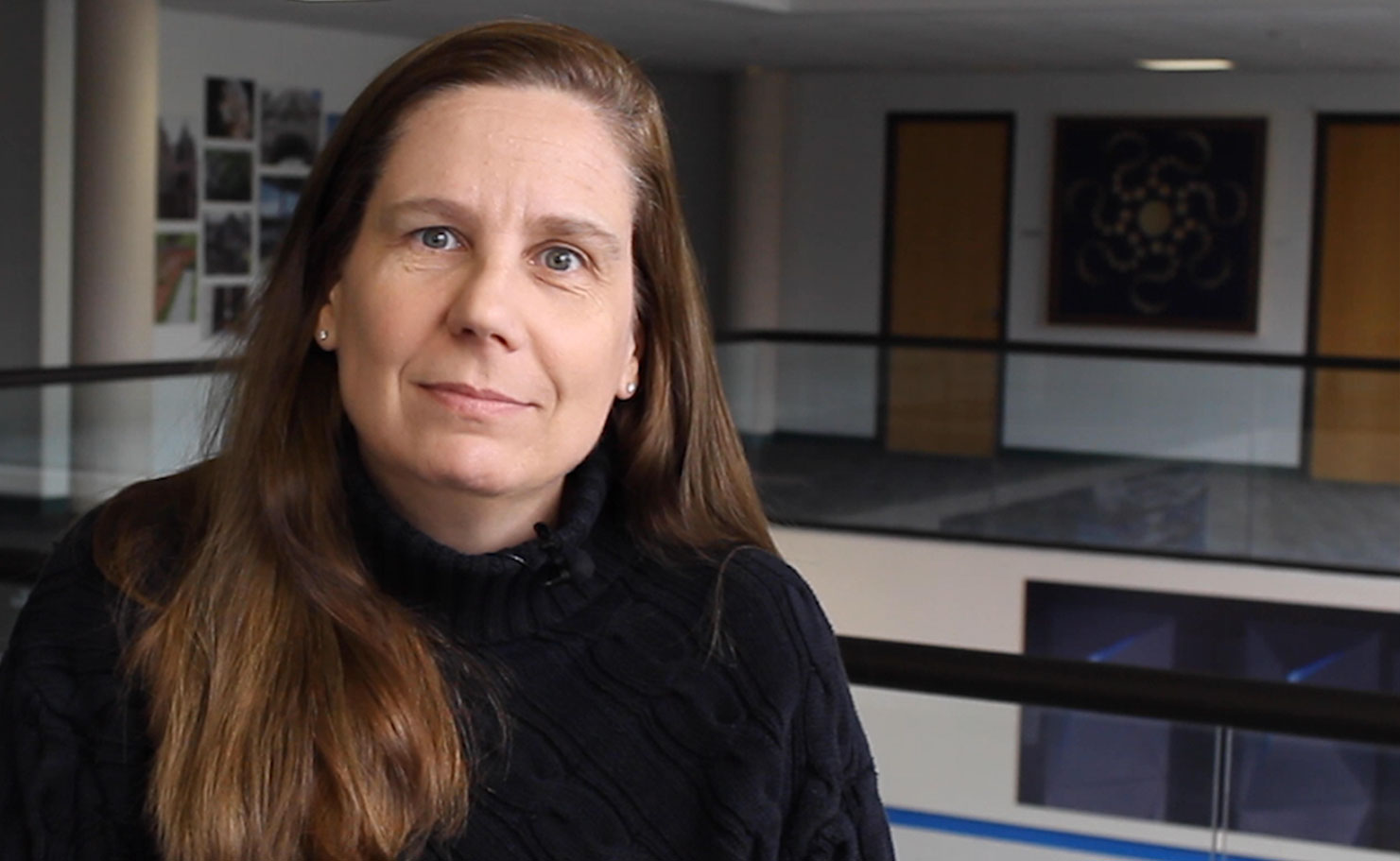 Make sure you have z/OSMF installed. You must also have authority to log in and access its resources.

Visit Shopz and place the order for your z/OSMF ServerPac.

How to get started with ServerPac Installation using z/OSMF

IBM z/OS Management Facility provides a framework for managing various aspects of a z/OS system through a task oriented, Web browser interface. By streamlining some traditional tasks and automating others, z/OSMF can help to simplify some areas of system management and reduce the level of expertise needed for managing a system.

In order to install ServerPac using z/OSMF, you must first ensure that you have z/OSMF properly configured and are granted the necessary authorization to use it.

For a new installation of z/OSMF, it is recommended that you begin by creating a base configuration. If you are installing z/OSMF for the first time. please begin by clicking the link below and following the directions listed.

Install z/OSMF for the first time

If you are upgrading from a previous release of z/OSMF, perform the upgrade actions for z/OSMF.

Beyond plugins and authority, you must also have certain PTFs installed on your system used to drive the installation actions (the system where the z/OSMF server is running). These PTFs are identified by SMP/E Fix Category IBM.DrivingSystem-RequiredService. To determine if you are missing any of the required PTFs, follow these steps:

Obtain the latest HOLDDATA from IBM using your preferred method and receive it into the SMP/E global zone for your driving system. The HOLDDATA contains information to associate fix categories to PTFs.

When ordering your ServerPac in Shopz, you will have the option to choose an installation method: z/OSMF Software Management or ServerPac ISPF Dialog. This option is now available for all IBM products found in Shopz, except for z/OS V2.4. By selecting the z/OSMF Software Management installation method, you are taking a step towards a consistent package format for all future ServerPacs.

Begin the ordering process at Shopz

ServerPac is orderable from Shopz. To submit an order for a ServerPac using z/OSMF, select the Installation Method of z/OSMF SW Management from the drop-down menu. 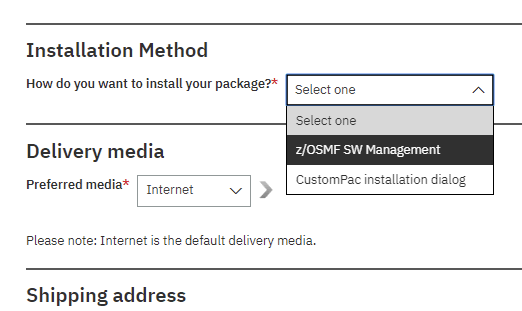 Step 3: Under Installation Method, select z/OSMF SW Management from the drop down menu.

The download option you select will depend on whether you have direct connection to an IBM download server.

You need to have acquired it through z/OSMF in order to deploy it.

To learn more about how to download a portable software instance, watch the tutorial videos:

Add a PSWI from a local workstation or download server (4:36)

If you currently download software orders from IBMâs download server direct to your z/OS System, you can continue to do so for a portable software instance. On the Software Management Portable Software Instance page, choose Actions --> Add --> From Download Server.

As you have done before, the Shopz download page for your order will contain information necessary to add your portable software instance with z/OSMF.

If you currently download software orders from IBMâs download server to your workstation and subsequently upload them to a z/OS System, you can continue to do so for a portable software instance. Do the following:

A Software Management task deployment is a checklist that guides you through the software deployment process, and it is the object in which z/OSMF stores your input and any output generated for each step in the checklist. Deployment is the process you use to install your z/OSMF Portable Software Instance.

When the deployment is complete, your software will be installed, configured, and verified. The configuration and verification will be accomplished with z/OSMF workflows, provided with the portable software instance, performed during the deployment operation.

To learn more about how to deploy a portable software instance, watch the tutorial videos:

Deploy: Install the software contained in the PSWI (4:02)

Watch the tutorial series for step-by-step instructions on how to download and install software onto z/OS using z/OSMF Software Management. This series provides an end-to-end walkthrough, from gaining access to a Portable Software Instance to finishing the deployment.

Q: What is a ServerPac?

A: A ServerPac is a product upgrade or system replacement package where IBM performs the SMP/E install (RECEIVE, APPLY, ACCEPT) of the products and installs service in your order. The latest Recommended Service Upgrade (RSU) level and all HIPER and PRP service available approximately one day before your order is built will be installed for the products included in your order. The resulting target libraries, distribution libraries, and the SMP/E environment are delivered in the order package. During the ServerPac installation, you configure your installation to map to your environment, such as data set naming, data set placement, catalog specification, etc. The Shopz ordering checklist for ServerPac is refreshed monthly to add/withdraw product support; therefore products are typically supported within a month of their General Availability (GA).

Additionally, ServerPacs can be delivered in Portable Software Instance (PSWI) format that are deployed using z/OSMF Software Management and workflows.

For example, before z/OS V2.5 is generally available, MQ is not available a z/OSMF ServerPac.

A: If you order z/OS V2.5 (or CICS, Db2, or IMS) after January 2022 as a ServerPac, then yes, you can only receive a z/OSMF ServerPac. However, let's look specifically at all the IBM products available as a ServerPac on Shopz:

For z/OS V2.5 (and the rest of the Z038 SREL, like MQ): Between z/OS V2.5 GA of September 2021 and January 2022, you will have the same choice as you see for CICS, Db2, and IMS today: CustomPac ISPF dialog or z/OSMF ServerPac. This means you have to take into consideration your ordering choices when you choose to order z/OS V2.5. This might make you order z/OS V2.5 sooner than you might have wanted to - or not. But do take these dates into consideration.

A: z/OS V2.4 will go End-of-Marketing. But even bigger than that, the CustomPac Installation Dialog method for ServerPac will be removed across the Shopz ServerPac catalog, leaving only the z/OSMF ServerPac as the sole ServerPac choice. CBPDO is not being removed.Â  Remember, though, CBPDO might be harder to install for a product as large as z/OS V2.5. If you've always preferred doing a CBPDO for CICS, IMS, or DB2, then this ServerPac ordering choice removal really will have no affect for you.

Q: What is the high level flow of installing a z/OSMF ServerPac?

Q: What are the driving system requirements for z/OS V2.5, as a z/OSMF ServerPac?

A: The requirements are provided in the z/OS V2.5 Planning for Installation book, but you can also find the list on this website z/OSMF ServerPac Overview found above.

Q: What if I can't get z/OSMF active on my driving system before I have to install z/OS V2.5?

A: If you can't get z/OSMF active on your driving system, then you can get a Customized Offerings Driver (COD). Remember, z/OSMF automatically starts when IPLing z/OS V2.3, and the z/OSMF quick start instructions help to get just the minimum driving system activated. At z/OS V2.5 GA, the COD will have z/OSMF active and will be able to install a z/OS V2.5 z/OSMF ServerPac.

Q: If I install z/OS as a z/OSMF ServerPac, what will the resulting system look like?Â  Can I still use my local deployment tools on it?

Q: If I install z/OS V2.5 with a z/OSMF ServerPac, must I use z/OSMF Software Update to install PTFs on it?Â Â

Q: I am looking to make my z/OSMF portable software instance install simpler. Am I able to save a previous configuration and merge it forward?

Q: What configuration and verification assistance is provided when deploying a z/OS portable software instance

Q: Where will the steps in the ServerPac-supplied POSTDEPLOY and VERIFY Workflows run?

Q: During the Perform Workflows step of the z/OS portable software instance deployment, in the POSTDEPLOYÂ  Workflow, the first step is called 'Collect Configuration Options'.Â  What does the 'Installation Type' mean, and which option should I select?

'Use existing operational data sets. You must update them prior to IPLing the new system'

Q: Does this mean that the IPL'd z/OS target system should have z/OSMF active, or be part of a sysplex that has z/OSMF active?

A: Either.Â  From the Perform Workflows step of the z/OS portable software instance deployment, when you create the VERIFY Workflow instance, you will be prompted to provide the âSystem (where the workflow steps will be performed)â.Â  Here, the active target system should be specified - ensuring that system has z/OSMF up and runningÂ  or is within a sysplex that has z/OSMF active, so the verification steps in the workflow can be run. Note that the target system needs to be known from the driving system's z/OSMF Systems definition for the VERIFY Workflow instance to be created.Â  For information on how this is done, consult the z/OSMF Configuration Guide. Also, note that as of z/OS V2.3, z/OSMF automatically starts at IPL time.

This video series provides an end-to-end walkthrough, from gaining access to a Portable Software Instance to finishing the deployment.

See an overview of how a single install method within z/OSMF can help system programmers manage software more consistently and be productive more quickly.

The link for ServerPac Installation Using IBM z/OS Management Facility Streamlines Software Management, on the Other resources tab in the Technical resources section, was updated to find the article on the new IBM Z Hot Topics website.

Added a new link for a Hot Topics article in the Technical resources section.

z/OSMF Portable Software Instance Demo added to the Try It tab of the Getting started section.

An intro video was added to the top of the page and the Multimedia tab of the Resources section.