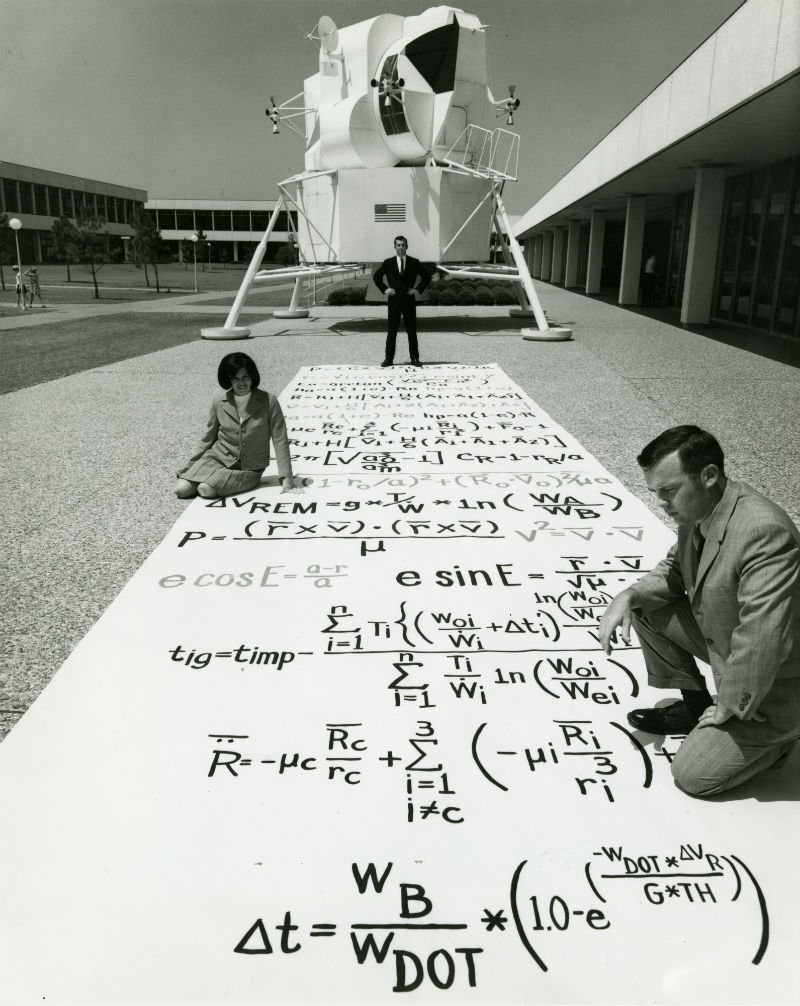 Standing before a model of the Apollo 11 Lunar Module, IBM Houston programmers Susan Wright (left), Mitch Secondo (rear) and David Proctor look over equations they have programmed into NASA computers at the Manned Spacecraft Center. Most of the formulas were taken from the complex mathematics used by ground computers that guided Astronauts Neil Armstrong and Buzz Aldrin to their lunar landing. (Photo: IBM)

In 1969, more than 4,000 IBMers worked alongside NASA to land Apollo 11 on the moon. And for each day of the many months they worked writing code, programming computers and running simulations, they never stopped thinking: What else could we do? What contingency can we plan for? What are we forgetting? In fact, it was policy for the IBMers working the Apollo program to come to work each day with at least three ideas—that’s 12,000 ideas a day.

Why spend time thinking about something when the job at hand was hard enough? Because you never know what’s going to work, which idea is going to make the difference, which problem yet to appear you may already have solved by committing to constantly thinking, relentlessly innovating and fearlessly creating.

“We didn’t know ahead of time that we were going to have a problem,” Phil Pollacia said, at a reunion this week of former IBMers who worked on Apollo. Phil managed the pre-flight trajectory for Apollo 11. “But when we had a problem, we worked together to solve that problem.” Phil says one of the lessons he learned on the space program was “don’t give up. Just keep pushing. Determination is going to make up for a lot of what you don’t know.” You can do it, Phil says. Just press ahead.

Our Apollo 11 IBMers never stopped pressing ahead. That was a lesson learned on Apollo, and it’s one practiced today at IBM, where a new generation of IBMers are at work each day trying to solve the problems of the 21st Century.

Homer Ahr, a former IBM computer programmer on Apollo, says that 85 percent of the code IBM wrote for Apollo 11 “had nothing to do with everything going right.” As important as it was to design computers, code and systems that could successfully land on the moon and return home, but it was just as important to anticipate what the “unknown unknowns,” or, in the IBMers’ 1969 shorthand, the “unk-unks.”

Planning for the unknown is critical, and we carry that lesson forward today at IBM in a commitment to working as a team to bring the best ideas to every problem, known and “unk-unk.” As Tommy Steele, a former IBMer who served as lead engineer on the instrument unit for Apollo 11 said, “forget the words ‘it’s not my job.’ Don’t worry about whether you get promoted,” but rather, focus on the mission at hand, “work on that and get it done.” As these IBMers learned five decades ago, delivering work that gets the job done—even a job that few believed could be done—and the credit will follow.

“Do the best job you can,” said Apollo IBMer Dave Proctor, who coded the lunar descent maneuver model. When you bring your best thinking to the job at hand, “you wake up in the morning, look in the mirror, and you can be happy with what you see.”

IBMers bring that Apollo 11 thinking to every aspect of our business today: believe it can be done, and have confidence that as a team, we can make it happen. Homer Ahr urges IBMers today to “have a purpose for what you do…having a purpose means more than the software you write and the hardware you design. And when you have it, commit to it one hundred percent.”

IBM & NASA: Working Side-by-Side to Land on the Moon