What’s in a pronoun? Does he, him, his not apply to every person who is perceived as a male? Or she, her, hers to a perceived female? In our non-binary world, they do not. For non-binary or genderqueer individuals, and those who relate to gender in a fluid way, to be misgendered can be a micro-aggression, or worse, harassment.

I use “non-binary” as an umbrella term to represent those whose gender identity does not sit comfortably with male or female. Non-binary identities are varied and can include people who identify with some aspects of binary identities, while others reject them entirely. Some identities included in this umbrella would be genderqueer, gender non-conforming, agender and genderfluid.

International Non-Binary Day on July 14  is a good time for all of us to truly see those around us. Of course, with so many still social distancing due to coronavirus, this may need to be done remotely. Yet inclusive contact—even virtual—among human beings is more vital than ever. So within our circles of family and colleagues, where we feel safe to do so, it is worth asking: what are your pronouns? Or in other words, how do you relate to your gender?

Even Tiny Words Can Cause Harm

Pronouns are among the shortest words in the English language. And yet, when improperly applied, they can cause serious psychological harm. For those who know that their physical body does not reflect their true gender, misgendering can make them feel disrespected, invalidated, dismissed or alienated. It is a further source of distress, anxiety and depression.

It is important to note that more than two genders have been documented since antiquity. The recognition is recorded in India as early as the eighth century B.C. Hijras are officially recognized as a third gender in India, Pakistan and Bangladesh.

In the U.S., some traditional Diné Native Americans acknowledge a spectrum of four genders: feminine woman, masculine woman, feminine man and masculine man. For other indigenous North Americans, the term two spirit describes Native people who fulfill a traditional third-gender (or other gender-variant) ceremonial role in their cultures. In Oaxaca, Mexico, the self-proclaimed “third gender” muxes mirror Western culture’s understanding of what it means to be genderqueer. Other examples abound. 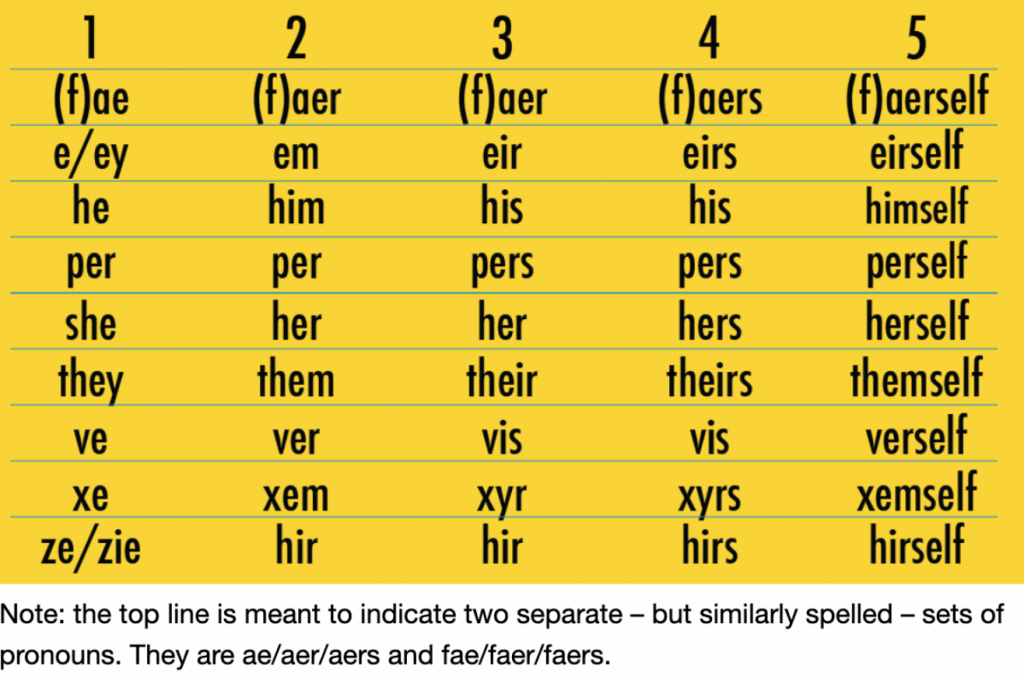 Starting in the Middle Ages, literary authors from Chaucer to Shakespeare to Jane Austen have used the singular “they” to describe someone’s features. However, from the 18th century on it became more common in the English language (as well as others) to use male pronouns when describing someone of a non-specific gender. This binary trend has evolved to now include neutral or gender inclusive pronouns, which more accurately refer to transgender and non-binary people.

How can we accelerate this language evolution? Here are a few simple steps.

First, familiarize yourself with gender-inclusive pronouns that are being used more frequently. Here is a table from one online source.

Once you’ve familiarized yourself, start to practice using people’s pronouns. You can review them in context here and test your knowledge here.

Ask and You May Receive

Next, share your own pronouns. In my case, they are she, her, hers. Forward-looking companies now encourage employees to include their pronouns in employee directories. At IBM, employees in many countries can select their pronouns in our HR system Workday, and thereby auto-populate IBM’s internal employee directory. If you lead a team, share your pronouns. It is an inclusive way to invite team members to do the same. You may also choose to include your pronouns in email signatures, Slack or simply when introducing yourself.

Finally, and most importantly, ask those around you for their pronouns. Don’t assume you know. These could be colleagues, teammates or even family members. Exploring what pronouns feel right is an important step for transgender, non-binary, gender-fluid and genderqueer persons. If you ask politely, they may choose to tell you. And remember, these are not their preferred pronouns. They just are their pronouns. If after learning their pronouns you make a mistake, excuse yourself, use the correct pronoun and move on.

It’s by knowing a person’s pronouns and intentionally using them that we foster a kinder, more inclusive society for all.

30 Years and Counting: Why IBM’s Environmental Report Matters More Than Ever