With the signing of the Americans with Disabilities Act (the ADA) on July 26, 1990, daily life promised to change. No longer would a store owner be able to eject a blind person who walked in with a guide dog. No longer would buildings with long flights of stairs be off limits to those in wheelchairs. No longer could an employer refuse to hire a qualified applicant because that employee was deaf or in a wheelchair.

In three decades, an entire generation has come of age in a time that has been a little bit easier, a little bit less hostile. There is still more to do of course. People with diverse abilities suffer from higher unemployment and lower educational achievement. We at IBM have been leaders in the struggle to provide all of our colleagues with an equal opportunity to succeed, and we will not stop now. Even before the law was passed, the company made sure that those with diverse abilities—our preferred term—would be able to work productively and to their fullest potential.

Our colleagues with diverse abilities know best what a difference the law has made. I find their stories inspiring and enlightening. 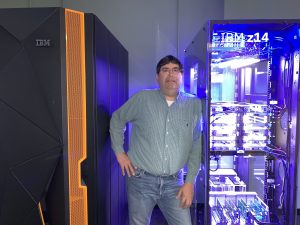 Al Noll, who has been deaf since birth, well remembers what things were like before the ADA. The law changed daily life. “Expansion of telephone relay services,” he said, “made it much easier to order pizzas and make doctor appointments. In addition, media and the Internet became increasingly more accessible through the use of captioning.”

But his work life changed very little, Al said, because for more than 38 years he has worked at IBM, which was ahead of the times in making accommodations. When he was in intern in 1982, people who were deaf were provided with two text telephones and assurances that interpreters would be available for classes and meetings. “IBM has always asked what accommodations we needed in order to do our work more effectively,” Al said.  He now works in Software Continuous Integration Delivery and Service. 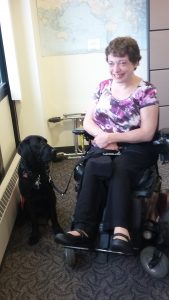 Tracy Schramm, an IBM Global Support Center Manager, who uses a motorized wheelchair and has a mobility-assist service dog, Gidget, also remembers life before the ADA. “For me,’’ Tracy said, “the ADA meant increased curb cuts, accessible buildings and access to wheelchair accessible transportation.” When she was in college at Southwest Minnesota State University, the ADA meant that dorms were accessible, as were buses for field trips.

IBM was helpful in a way that Tracy said made her comfortable. A few weeks after she joined the company, a manager noticed her struggling in the women’s restroom because the stall wasn’t large enough for her power wheelchair. “She made sure the appropriate renovations were made in the ladies’ room,” Tracy said. “I hadn’t even thought to ask IBM to make the bathroom stall bigger. I was new. I didn’t know who to ask, and as a new person, I didn’t want to be a burden to anyone.” 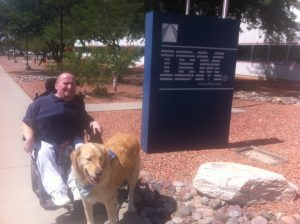 John Olson, who works in Scale Out NAS and Software Defined Storage, graduated from high school and started at the University of Arizona in 1990, the year the ADA was passed. “I could tell that physical accommodations in buildings and routes around campus were being updated not just because they should be, but because they had to be by law.” He uses a wheelchair, and because of the law, would never again be told that his access to education was predicated on his not being “too much trouble for the teacher,” which was the case in his small-town elementary school.

One IBMer, who was born after the passage of the ADA and who joined IBM in January as a characterization engineer, said she could not have succeeded in high school and college without the protections of the law. For her, the law assured that, as an autistic person, she would have extended time to take tests. I’m “very detail oriented,” she said. Extended test-taking time let her “add in as much work as I needed, to prove my thought process was as thorough as possible, and that I gave my all.”

An Inspiring Past, But More to Accomplish

At IBM, our most important asset is our people. We are proud of our long-standing commitment to diversity and inclusion—not only because it is morally right, but because workplaces are smarter, more creative and more successful when they include people with a wide range of diverse abilities, preferences and backgrounds.

Accommodating diversity also makes sense for our business in other ways. We can ensure that technology innovation is focused on being adaptive to everyone’s abilities. Having many employees with diverse abilities means we get smarter feedback on products and services, increasing innovation in this important area.

Most recently, we have focused on our Neurodiversity community, which has become more active at the company. Accommodating our neurodiverse colleagues is a business priority, because it  allows us to tap into important talents that are good for business, such as sharp focus and attention to detail. Some neurodiverse individuals bring pattern-matching abilities that exceed those of their “neurotypical” peers.

There is of course always more to accomplish. In the U.S. there are still too many inaccessible buildings, too little assistive technology, and saddest of all, too many lingering negative attitudes toward people with diverse abilities.

To ensure we are part of a global movement to give equal rights and opportunities to people with diverse abilities, IBM joined The Valuable 500 earlier this year. This global group of more than 240 companies and leaders is committed to putting disability inclusion on its business leadership agenda. That effort aligns with IBM’s commitment to creating a work environment where we eliminate barriers to success and help all employees contribute to both clients and the company at the highest level of their abilities.

Working together, we can learn from each other and build upon the three decades of ADA accomplishments to make even bigger strides around the world,  so all employees—including those with diverse talents and abilities—can bring their full selves to work and reach their full potential.