Continuously Learning and Reinventing, This Man is Connecting Everything to the Internet

Dinesh Verma is an IBM Fellow, the company’s pre-eminent technical distinction granted in recognition of outstanding and sustained technical achievements and leadership in engineering. Dinesh has worked in IBM Research for nearly 25 years, holds more than 150 patents, is a member of the IBM Academy of Technology, and heads a team that is focused on Distributed Artificial Intelligence (AI). The IBM THINK Blog caught up with Dinesh recently to talk about his current work, as well as his career at IBM. The following is an excerpt and is part of our Perspectives series featuring stories by and about IBMers who take the “long view.” Whether it’s discovering the next breakthrough, starting the next chapter in their career, or examining skills that drive the next wave of innovation, Perspectives captures the story.

THINK: Can you tell us a little bit about your role at IBM?
Dinesh Verma: I lead the Distributed AI team at IBM Research at the Thomas J. Watson Research Center in Yorktown, NY. We conduct research on technologies at the intersection of the Internet of Things, Artificial Intelligence and Distributed Systems. In essence, we are creating new intelligent devices that interact with each other to solve important business problems for our clients. 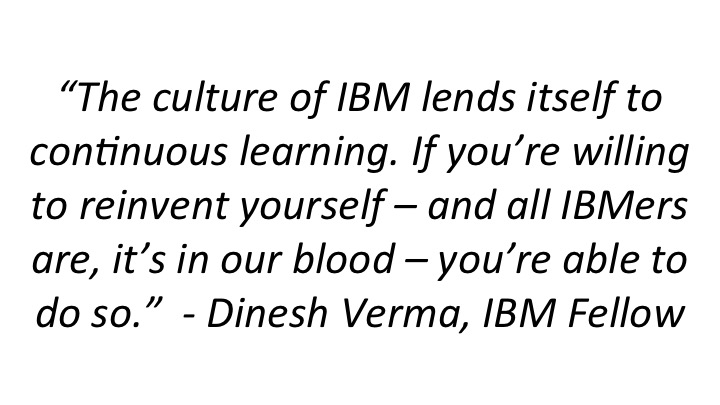 THINK: What are you working on these days?
DV: Right now, we’re focused on making the Internet of Things more intelligent while keeping the highest standards of security (it’s estimated that by 2020 there will be more than 20.4 billion IoT devices in the world). Technology continues to make life easier with connected devices like cars, appliances, home and personal devices, but it is crucial that we make them secure and safe.

We are a forward-looking team. While we work on and with today’s cutting-edge capabilities and technology, we also keep an eye on what our clients will be able to do, and what they’ll need to do, five or more years in the future. This gives me the opportunity to really think outside the box – because in most cases, there is no box yet, we’re inventing for the future.

The potential of emerging technology such as AI and IoT is still largely untapped. But as they become more mainstream, clients need guidance and assistance at a variety of stages – be it at the research, development or deployment level. I get to look at what clients are doing or planning to do, see what works and what doesn’t and from there, invent new capabilities that will impact the future.

THINK: You’ve been granted more than 150 patents. In any sport, you’d be considered an all-star. Can you talk about one of your favorite patents?
DV: One of my favorite patents is U.S. Patent 9,342,357 – Extending Cloud Computing to On-Premises Data. Several of our enterprise clients told us that they loved the concept of Cloud Computing because it lets them easily and rapidly train AI models and develop analytics. However, they were reluctant to send data outside their own environments due to privacy and regulatory issues.

We created and demonstrated a system which let our clients create AI and analytics algorithms in the Cloud and then seamlessly move the intelligence created in the Cloud to their on-premises data to use those models locally. It was considered outlandish when we proposed it, but now it’s gained wide acceptance in the technical community as a fundamental aspect of Edge Computing. 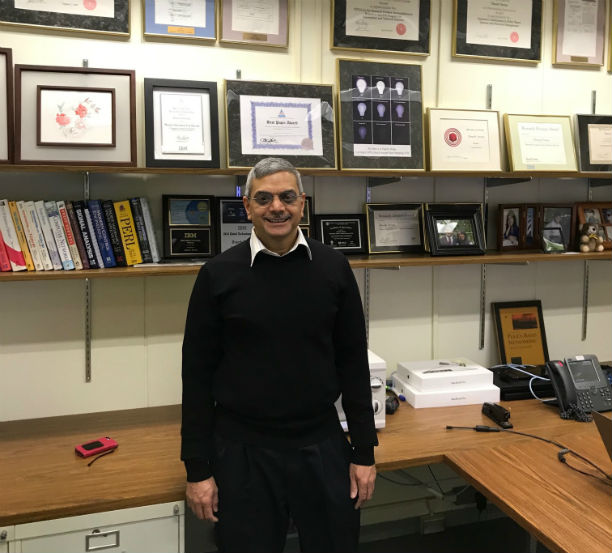 THINK: What was your first job at IBM?
DV: When I joined IBM in 1992, I was part of a team working on Asynchronous Transfer Mode or ATM networks. ATM was a protocol connecting different computers together. It was also an alternative to the Internet Protocol suite commonly used today. But, as we know, ATM lost that competition and ended up as a supporting component embedded inside today’s Internet.

From there I went on to research and invent for general Internet technologies, then autonomic computing and network management – culminating in my current role of Distributed AI and IoT.

THINK: Those are very different roles and technology. How have you developed new skills to grow your career?
DV: During my doctoral studies, my advisor, Prof Domenico Ferrari, impressed upon me that the fundamental skill a Ph.D. student needs is to solve hard technical problems, not to master a specific technology. With the speed of change in Computer Science, specific technology can quickly become obsolete. Even as technology changes, the approaches to solve open research problems remain the same.

I am fortunate to work for IBM, one of the few companies that is active in several areas of Computer Science, and facilitates its employees to learn new technologies and skills continuously.

At IBM, there are many resources to help employees learn new technologies, ranging from online courses, mentors and experts in different fields, and access to technical publications for personal learning.

The culture of IBM lends itself to continuous learning. If you’re willing to reinvent yourself – and all IBMers are, it’s in our blood – you’re able to do so. I think this environment and culture is unique to IBM.

Davos 2018: Creating a Shared Future in a Fractured World