Breaking Down This Year’s Black Friday

The clock is ticking. It’s the countdown to Black Friday, an American tradition that kicks off the holiday shopping season. While the promotions begin earlier each year, Black Friday still remains the day to cash in on the biggest deals. For example, last year more than 101 million people ventured to stores on Black Friday, up from 74 million in 2015.

Our IBM team has long had its eyes on the major holiday shopping days. In fact, for years we reported traditional metrics that showed the growth of online shopping, the increase mobile commerce and more.

But today’s retail environment is far more complicated and can’t be explained through reports on what’s happening. As a result, this year we are combining weather and foot traffic data to compare the behaviors and interests of shoppers in multiple metropolitan areas around the country. Through this analysis we will be able to share why shoppers did what they did this Black Friday.

Here is what we expect to see this Friday.

Shoppers Will Travel Further for Deals

Apparel and Accessory Retailers Will Prevail 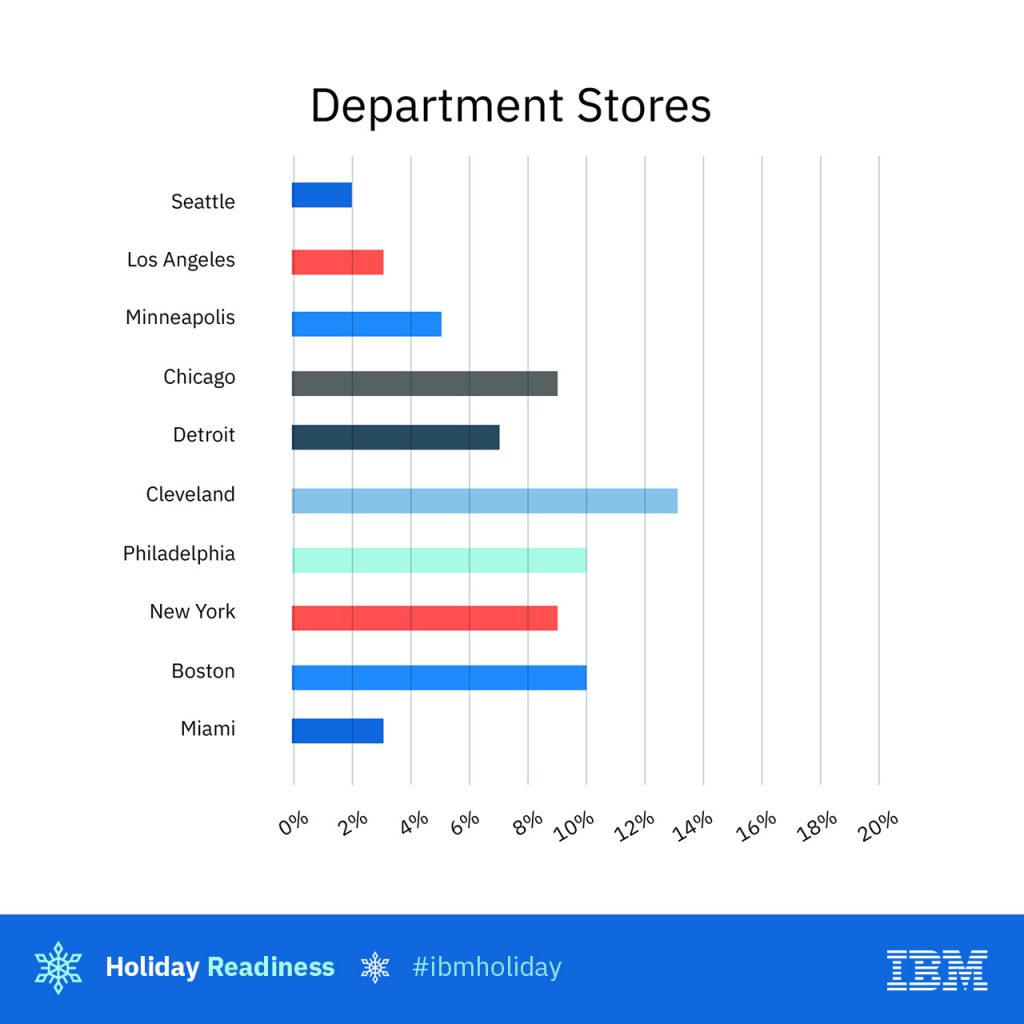 One thing these cities have in common is their location, and that’s important. They are all in the eastern U.S. where temperatures are expected to be colder on average this year. This cooler weather creates a holiday season feel that puts residents in the mood to shop earlier, especially for seasonal items. As a result, retailers in these areas can expect to see an even larger number of people venturing to stores on Black Friday than normal. The only exception is New York.

IBM predicts that New Yorkers will stay local on Black Friday, driving only 2% further on than on a typical November weekend. That’s lower than every other city except Miami and Los Angeles.

Like New York City, residents in warmer and Western regions will also be reticent to shop this Black Friday. However, unlike New Yorkers, it’s likely these consumers will elect to relax rather than battle long lines.

IBM expects that that residents in Miami and Los Angeles will drive 1% less on Black Friday than they would on a typical November Weekend. In Miami, these numbers could ever be lower with due to a rainy forecast that’s expected in the region. As a result, retailers in these areas should expect a bigger wave of shoppers to hit the stores later in the season.

These numbers are just a portion of what we’re looking at this holiday when we will move beyond the “what happened” and shine a little light on why and when. Why do shoppers in one city flock to the stores on Black Friday and where are they going? Why are other consumers avoiding the madness at their local retailers? This season, we will begin to answer these questions in order to understand the holiday shopping season like never before.

If you are interested in seeing more of this data visit here. You can also check out our newest video on the evolution of the retail industry, just click here. In the meantime, happy shopping to you all!

Standing on the Shoulders of Giants