How Fordham, IBM are Teaming on Blockchain

You may wonder what a 175-year-old Jesuit university in the heart of New York City might have in common with IBM, a global icon of modern technology. Let me assure you that we are linked in ways both deep and longstanding: driven by shared commitments to the human family, to fearless inquiry, and to the proposition that our work should make the world a better place. Given these facts, it will not surprise you to know that the University has had a long and productive partnership with our high-tech, New York neighbor. 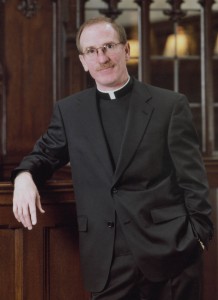 Most recently, in 2009, Fordham collaborated with IBM to introduce a new business analytics curriculum to help prepare students for careers in key growth industries, including energy, utilities, and healthcare. In 2011, we expanded this effort with the creation of a new IBM-supported Center for Digital Transformation.

This week, we are strengthening our partnership with an IBM academic initiative designed to educate the next generation of developers and users of blockchain technology: one that establishes the first peer-to-peer, global platform for business and personal transactions.

Originally known as the technology that underpins the electronic currency bitcoin, blockchain is built upon advanced cryptographic technology, making it a secure and fail-safe technology for the digital age. Blockchain works by building consensus between members of a business network, and updates the terms of the contract in real time so that business transactions are completed much faster than before. (IBM’s CEO Ginni Rometty recently predicted that blockchain technology will do for transactions what the Internet did for information.)

As more and more organizations adopt blockchain, they face questions about the technology’s use and its impact on their infrastructure. One of the most fundamental and immediate challenges they face is how to attract the next generation of developers, users and providers of blockchain and train them to build blockchain networks. The technology is so new that currently there is a gulf between global demand and a cadre of trained, technical experts to develop and manage the technology. The IBM Blockchain Academic Initiative will ensure that Fordham alumni help close that gap.

Fordham’s Gabelli School of Business, with its emphasis on the emerging areas of business analytics and market intelligence, is recognized as a leader in these areas. Likewise, Fordham Law, also part of this initiative, is a longtime proponent of teaching law from a solid ethical foundation. Our undergraduates are of course strongly encouraged to treat New York as their classroom. As residents of New York City, Fordham students have access to perhaps the largest and most diverse community of public and private resources in the capital of the world.

As part of that community, IBM has chosen Fordham to kick off its new blockchain academic initiative. The goal is to ensure that Fordham – and later, other schools around the world – are adequately preparing our students for the digital transformation that blockchain will bring to business and policy transactions.

To kick off the initiative, on Thursday, January 26, in conjunction with the International Conference on Cyber Security (ICCS), we were delighted to host the Fordham-IBM Blockchain Workshop at our Lincoln Center campus. Speakers from the FBI, IBM, Fordham and hedge fund MacKay-Shields offered their thoughts on how academia and students can play a role in advancing blockchain technology in a wide variety of fields and job roles.

Ultimately, this initiative is about the networking of technology and people. Just as blockchain depends on a network of trusted, committed individuals to make it work, so too must private companies, governments and academia collaborate to drive the world’s most promising technologies forward. The IBM Blockchain Academic Initiative is building that community, and I am very pleased that Fordham is at the head of the class.

The In-Store Retail Imperative: A Return to Relationships