The Dawn of Quantum Computing is Upon Us

In 1981, at a conference co-organized by MIT and IBM, the famously brilliant and irreverent physicist Richard Feynman urged the world to build a quantum computer. He said “Nature isn’t classical, dammit, and if you want to make a simulation of nature, you’d better make it quantum mechanical, and by golly it’s a wonderful problem, because it doesn’t look so easy.”

Quantum theory was a revolutionary advance in physics and chemistry in the early 20th century, an elegant mathematical theory that explained the bizarre behavior of subatomic particles, and led to great technological advances such as the laser and transistor. But only in the last decade of the 20th century was it realized that quantum theory applies not only to atoms and molecules, but to bits and logic operations in a computer.

Now, in the 21st century, this realization is bringing about a revolution in the science and technology of information processing, making possible kinds of computing and communication unforeseen by the founders of the information revolution. But to explore and develop these possibilities, we will need to learn how to build a quantum computer, that is to say a device able to store and process this delicate new form of information as reliably and smoothly as an ordinary computer manipulates its bits. 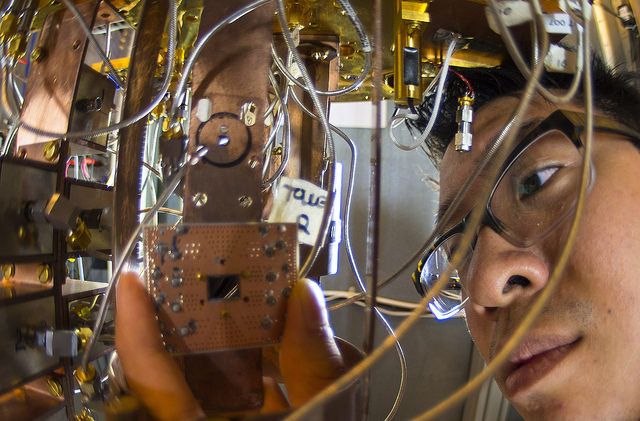 Until now only a privileged group of scientists and innovators have had access to the engineering and hardware needed to build a quantum computer. That’s why today we’re opening up our advanced quantum processor to not just the scientific community, but the general public, providing access to a quantum computing platform from any desktop or mobile device via the cloud.

This is a seminal moment in computing. When we look back years from now, I believe we will see today as the beginning of the road to a truly practical quantum computer, which, when it’s built, will be one of the greatest milestones in the history of information technology.

Today we’re laying the foundation by inviting anyone interested to create algorithms and run experiments on IBM’s quantum processor, play with individual quantum bits (qubits), learn about quantum computing through tutorials and simulations, and get inspired by the possibilities of a quantum computer.

One reason for building quantum computers is that some problems are known to be solvable exponentially faster on them than on any classical computer. For other problems, of more general application, the known speedup is quadratic, still dwarfing any mere multiplicative improvement in classical technology. These known speed-ups are what is what has ignited interest in, and a race to build, a universal quantum computer.

Beyond mere problem-solving, quantum versions of the Internet and of cloud computing can give users the confidence, based on laws of physics rather than unproven mathematical conjectures, that their data remains private and secure. Another promising area is quantum simulation—by working the way nature does, quantum computers raise the hope of understanding chemical and biological processes, and materials of all sorts, better than any classical simulation can.

For still other problems, in machine learning and big data, quantum algorithms have been proposed that might offer a significant advantage, though it is too early to tell. But the most important reason for developing quantum computing is that it is so new, and so radically different from conventional information processing, that it would be foolhardy to think we can accurately foresee what it is good for. It must be explored to see what we find out.

We want to expose the advances we’ve made because to really use a quantum computer it requires that we think differently. The intuition we have in the classical computing world does not apply in a quantum mechanical one, so the idea of sharing our current capabilities will let the scientific community and public start to understand and develop a new way of thinking – or think quantum.

Whether you’re a student, developer, quantum physicist or general science enthusiast, anyone in the world can explore and run experiments and create their own innovations on IBM Research’s five qubit quantum system. By doing so, we believe we will accelerate progress and discover new applications across fields such as drug discovery, quantum chemistry, machine learning and many more.

Quantum computing has bits, just like any computer. But instead of ones and zeros, its quantum bits, or qubits, can represent a one, a zero, or both at once, which is a phenomenon known as superposition. However, the superposition that occurs in a quantum computer is very different than any conventional computer – it allows two or more qubits to behave in a coordinated way that cannot be explained by supposing each is doing its own thing. This is called entanglement, and it’s what gives a quantum computer its uncanny power. Quantum thinking will allow us to re-imagine computing that can solve some problems too hard for conventional computers, and do things with information no one thought possible. 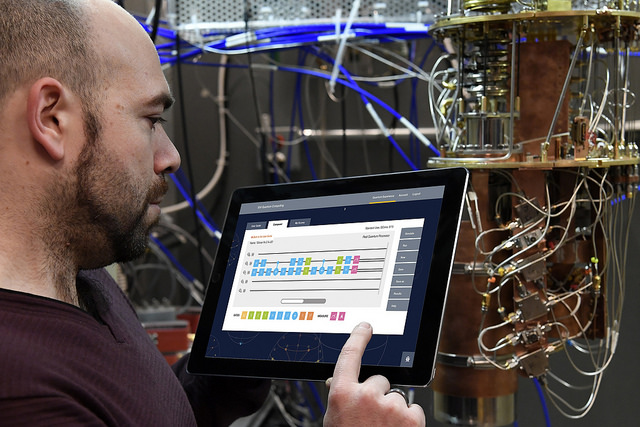 IBM’s team’s latest engineering advances include combining five superconducting qubits in a latticed arrangement on a chip’s circuit design, and demonstrating a key operation known as a parity measurement – the basis of many quantum error correction protocols – to give users opportunities for reliably high-quality performance and speed-up.

As with any feat, there are many challenges to building a practical quantum computer, including preserving the very fragile state of quantum information. Any kind of coupling with the outside world threatens to disturb and destroy it. But if you isolate a quantum processor entirely, it cannot compute because you cannot send signals in and out. This delicate balance is the reason we have to cool our superconducting qubits to temperatures within a few thousandths of a degree of absolute zero – something we’re still mastering.

The theory of quantum information science had been well developed and there had been some practical demonstrations of quantum principles, but we’ve reached a turning point where the blend between science and engineering is starting to result in physical systems that can scale up. In fact, there’s been more progress made in the field in the last five years than there’s been in the last 20 years.

Only a year ago we showed the ability to detect and measure two kinds of quantum errors simultaneously, as well as demonstrated a new qubit circuit design that could successfully scale to create large chips capable of powering computers. Building a universal quantum computer hinges on these milestones.

Today we’re at the threshold of doing what Feynman presciently asked 35 years ago. As Feynman predicted, it wasn’t easy, but along the way, we’ve rebuilt our whole theory of information and information processing on a deeper foundation. And the best rewards are yet to come.

Weaving Cognitive into Couture: Watson and Marchesa Collaborate for the Met Gala

Retail’s Store of the Future Will Run on Cloud