On the 6th of June, I boarded a Finnair plane towards Johannesburg, South Africa. I was going to spend a month in Pretoria participating in an IBM pro bono program called Corporate Service Corps. The program, which has been running for more than 10 years, simultaneously delivers excellence in leadership development and impact for communities facing critical challenges while demonstrating IBM’s innovation in skills, technology, and citizen diplomacy. And even with all the excitement and freaking out happening I felt while boarding the plane, I mostly was humbled and grateful to have been selected among all the applicants.

So, what did a month in South Africa working with the amazing people from NEMISA (National Electronic Media Institute of South Africa) eventually taught me?

I keep saying to everyone that South Africa is a country of opposites. In one way, it is an amazing place with nature and wildlife. You simply fall in love with living in a lodge with full service and security at the front gate of the preserve to keep you safe. On the other hand, there are cities where you don’t even want to walk around (nor are you allowed to specifically after dark) because you can see that the people hanging are feeling bad due to the massive unemployment rates. The people we met were amazing, passionate to make a better future for the country and so friendly and helpful. But at the same time one can see that there is lacking a culture of urgency for change and things just take longer time – often for no explainable reason. But that is just the over-effective Finn in me thinking. So, one thing I took with me from the trip was:

Things can take a little longer but still work gets done

We lived in Sheraton Pretoria for 29 nights. The hotel was great in its own way. Not necessarily the same standard as you would meet in a Sheraton in New York, but in comparison with the living standard in South Africa it was more than adequate. Furthermore, the hotel manager did what he could to make us feel safe and sound – even when there was no electricity for two days due to breakage in one of the municipalities’ electrical distribution centers. The food was British influenced which meant that I gained weight during the stay just by eating sandwiches and pizza too many times while not utilizing the (not-so-good gym) to exercise as much as I should. However, everyone eventually gets bored at a hotel no matter how good it is. So, another take from the month is that: 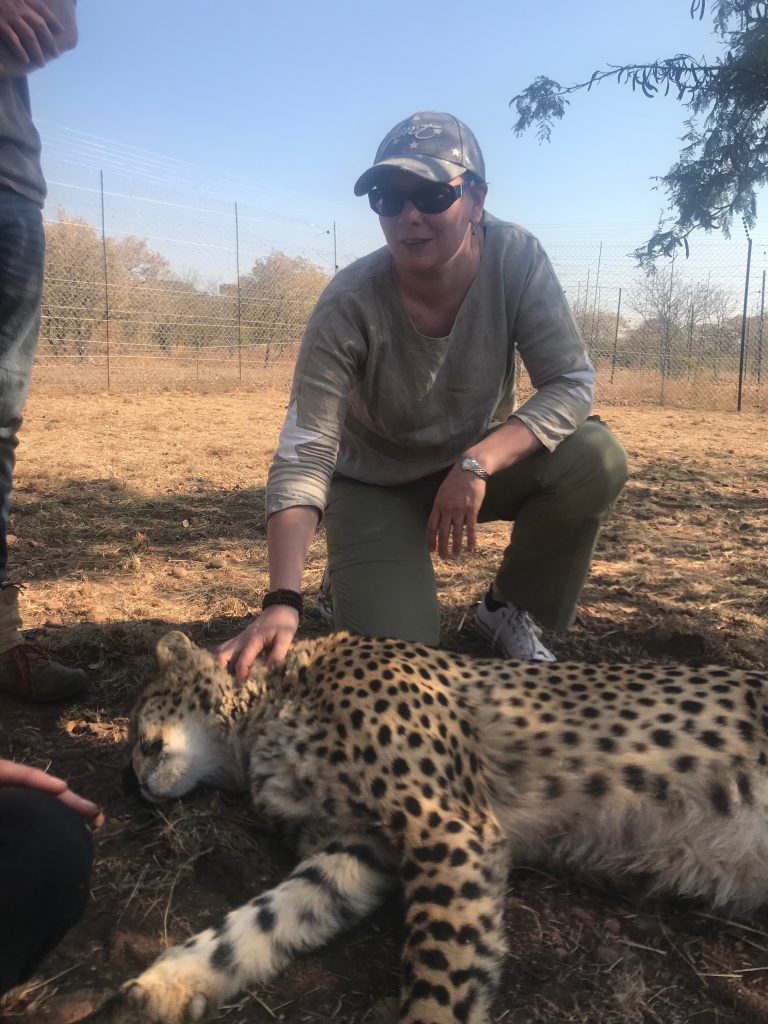 Besides not being able to walk around the neighborhood, we had a 1,5 hours commute to Johannesburg during the first weeks. Our shuttle had some air-conditioning but 6-9 people in a minibus meant sweaty afternoons in a cramped space while already tired. The first thing I did when I came home to Helsinki was to go for a short walk outside. Living a month in a country where this was not a possibility reminded me (again) of how amazing it is to live in the Nordics. Although you hardly get to pet cheetah brothers who were rescued from tourist attraction →

However the fact that I can enjoy the pure nature whenever I want, that the sides of the roads do not have any garbage in them and recycling works, that I can take a train back home from the city at midnight without feeling any insecurity and that I know no matter how rich or poor we are, my kids have the same possibilities in life as others, are a good to keep in mind coming back home. Therefore, the third take from my trip due to my experiences in South Africa is that:

Being away from your normal work for six weeks shows in your inbox and Slack. Although I did manage my inbox most of the time away (except for the few last days of the two-week vacation), I ended up having 1200+ e-mails and countless unread Slack messages on the following Monday. One of the reasons I wanted to come back early from vacation in the middle of July when most of the Nordics is still gone was that I suspected this would be the case. And I am glad I did that as we closed our acquisition of RedHat the same week I returned to Finland, which naturally meant some exciting work for us in marketing.

Now after being back for four with my normal duties, the e-mails situation is under control again. Although it is partly because many of us have started using other tools such as Slack, Trello and Box. These new tools and ways of working were something we also used in South Africa to some extent. That said, we could have used them even more. I have work to be done in these new tools myself and coming back to the mess of e-mails where you try to gather the bits and pieces on what has happened during the early summer reminded me again that my team and I need to:

Overall, the project with Corporate Service Corps in South Africa was very interesting and I am happy that I got the opportunity to work with NEMISA. Hopefully, I used my expertise well enough to help them achieve their ambitious goals around digitally skilling South African citizens.

I have been in my role as Nordic Marketing Leader for the Cloud Business Unit since the beginning of the year and I still struggle with some details in the offerings of our portfolio. A portfolio that is so broad that I don’t think one person even can learn every nitty-gritty detail of it. This results in me experiencing an imposter syndrome regularly when talking to people inside and outside of our organization. After 5 years in marketing, I still don’t consider myself a true marketing professional simply for the reason that I work with such an amazing team of professionals. Furthermore, thinking of the fact that I do not fully know our business area of responsibility makes me doubt regularly when someone notices how much I still have to learn. However the month in South Africa – as the only marketing professional out of the 16 IBM’ers – made me realize that maybe, just maybe, I actually know what I am doing. At least to some degree 😊 The take of the month was to:

Remember you are an expert and be proud of that expertise

The family – old and new

A month is a long time to be away from your family and friends. Even though the world today is connected via social media and you don’t really miss out on much as a result, I am a person who loves to talk to people in person. Communicating online is just not the same. In one way it was great to see that my husband is perfectly capable of taking care of the kids and that the kids are capable of surviving without their mother for a longer period of time. But, on the other hand, it made me feel a bit useless while abroad. However, it was nice coming back and see that they had all missed me a bit – even though the kids tried to hide it as much as they could. The month away made me realize how big my 10- and 12-year-olds have really become. And a good thing to remember in the future is:

Sometimes doing things differently ends up just as good, so give space to let people do things their own way

Finally, on top of my lovely family in Finland, I now have an extended “family” all over the world. The friendships we formed during the month will last a long time and I am sure that I will reach out to these new friends whenever I visit their countries. Some plans are forming up already!

The reflections of the month have already resulted in some changes along the way – hopefully mostly positive ones. However, I am sure that my experience in South Africa with Corporate Service Corps will be with me for years to come.

To read more about my experience, please take a look at my personal blog. Also, make sure to check out the IBM Corporate Service Corps site for additional information about the program. Lastly, you are more than welcome to contact me at eveliina.paljarvi@fi.ibm.com if you have any further questions.

The future of highways with AI