Rethinking the Mayflower: How I Came to Build an Autonomous Ship to Cross the Atlantic 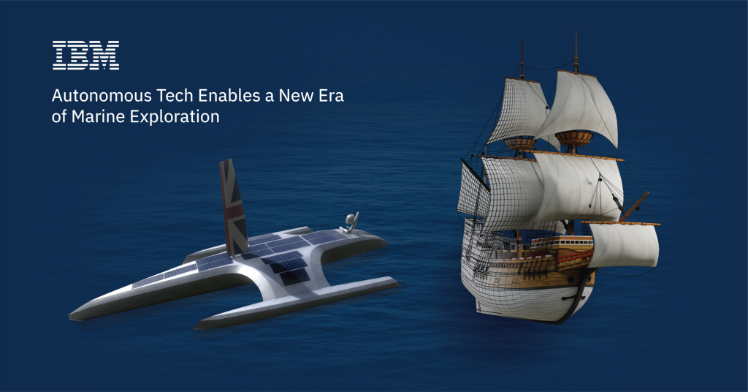 To cross the Atlantic with an unmanned, autonomous ship will push technology to its limits. Like the Mayflower’s 101 passengers in 1620, we’ll also need a lot of help and some good luck.

I grew up in Boston, Massachusetts. I spent a lot of time messing around in the ocean, swimming and diving. Unlike my friends and brothers, I preferred looking at the fish to eating them. I tried a few things at university. First physics. Then classical studies. Before I started working, I even did a stint in the military.

I finally went to Texas A&M University to study marine archaeology. It was interesting but not enough to hold my attention for long, so I started taking classes in oceanography, and then got a job in a company that built sonar systems. It was there that I met my wife – she was studying marine archaeology at the same university.

Around that time, my friend Fredrik Søreide and I became interested in using robotics and autonomy in ocean exploration. It opens up parts of the ocean that simply aren’t accessible for humans. Places that are either too dangerous or too hard to get to using diving or ship-towed equipment. Despite two-thirds of our planet’s surface being covered in water, so far we’ve explored less than 5 percent. Autonomous technology will help to change that.

In 2001 we established a non-for-profit organization, ProMare, to segregate our research interests from the university and, later, our submarine business.

Fast forward 15 years and my wife and I were living in Plymouth, England. Plymouth Council held some meetings to brainstorm ideas for how to commemorate the 400th anniversary of the Mayflower voyage that was coming up in September 2020. Someone suggested building a replica of the original Mayflower ship. That really didn’t make much sense to me. I figured why not use the opportunity to advance into the future rather than reminisce about the past? That was when the idea of the Mayflower Autonomous Ship was born. We call it MAS for short.

If you take the human factor out of ships it allows you to completely reimagine the design. Instead of thinking about eating, sleeping, safety and sanitation, you can focus purely on the mechanics and function of the ship. Our idea was to create an autonomous and crewless vessel that would cross the Atlantic, tracing the route of the original 1620 Mayflower and performing vital research along the way. 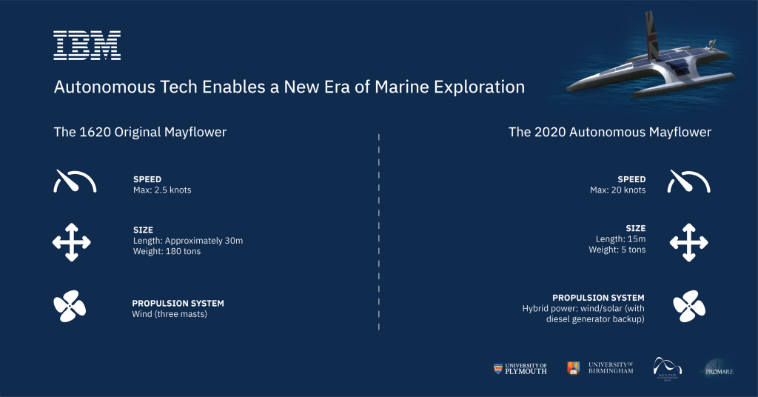 For MAS to survive the voyage, we needed a form factor that was highly efficient and resilient. That’s why we opted for a trimaran design which is both hydro- and aero-dynamic while having the added advantage of being highly stable in rough seas. Using aluminum and composite materials, MAS will be very lightweight: about 5 tonnes and 15 meters in length. That’s half the length and less than 3 percent of the weight of the original Mayflower. Despite its later fame, the 1620 Mayflower was ill-suited to its transatlantic mission and, with headwinds blowing against its hulking form, it took almost two months for a voyage that we are planning to complete in less than two weeks.

An autonomous ship is of limited use if it keeps needing to refuel. Ours will use solar panels to charge on-board batteries which will power MAS’s motor – even at night. A single wingsail will allow us to harness wind power as well as make it more visible to other ships – a ship strike in the middle of the Atlantic would be catastrophic. We anticipate that MAS will be able to clock speeds of around 20 knots, compared to the original Mayflower’s humble 2.5 knots.

AI and other Advanced Technologies at the Helm

When it comes to modern technologies, the original Mayflower was almost bereft. For navigation it had a ship’s compass. To measure speed, it towed a ‘log-line’ – a wooden board attached to a hemp line with knots tied in it at uniform intervals (hence the term ‘knots’ still used to measure a ship’s speed today).

In stark contrast, MAS will have a state-of-the-art inertial navigation and precision GNSS positioning system. It will have a full suite of the latest oceanographic and meteorological instruments, a satellite communications system and 2D LIDAR and RADAR sensors.

As there will be no crew on board, we need to build a ‘brain’ for the ship to help it to make its own decisions at sea. This is where IBM comes in. IBM is a company known for pushing the boundaries of science and technology – it is the company that helped put man on the moon. MAS’s mission control system will be built on IBM Power Systems servers – similar to those used in the world’s most powerful supercomputers. We are currently using real data from the Plymouth Sound to train IBM PowerAI Vision technology to recognize ships, debris, whales and other hazards which come into view on MAS’s on-board video cameras.

When a hazard is detected, MAS will use IBM Operational Decision Manager software to help decide what to do. That may be to change course, or in case of emergencies, speed out of the way drawing additional power from its on-board back-up generator.

Connectivity in the middle of the Atlantic is patchy, so we will use edge devices on board MAS to store and process data locally when needs be. Every time we get a connection, the ship will connect to the IBM Cloud and the systems will get back in sync. 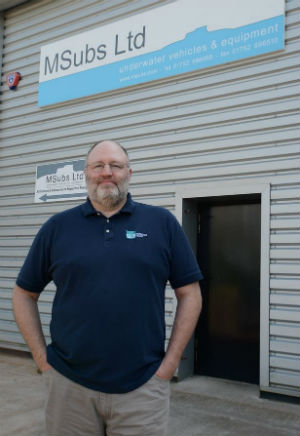 Brett Phaneuf, Founding Board Member of ProMare and Managing Director of the Mayflower Autonomous Ship.

Why the Ocean Always Wins

The ocean is a crucial resource for the world. It is a major supply of food, minerals, metals and energy. It absorbs carbon and produces between 50 to 85 percent of the oxygen in the atmosphere. It is crucial that we understand it and protect it. But the current cost and risk of manned research ships is way too high for us to be able to gather all the data we need.

This is where MAS comes in. This amazing ship will carry three research pods coordinated by the UK’s Plymouth University. These pods will carry scientific instrumentation that will help ensure scientists can gather the data they need to understand and protect the ocean for future generations – especially in the face of threats from pollution and global warming.

By leveraging AI, machine learning and other new technologies and developing a new class of efficient, crewless and environmentally-friendly ship. MAS will be able to spend A LOT of time in the ocean learning an infinite number of new things. It will start up a whole new era of marine exploration just when we need it the most.

The people of Plymouth are already engaged and many of them are already invested in it through a round of crown funding. Thanks to the University of Birmingham’s Human Interface Technologies Team, we plan to open the experience of the mission to millions of other ‘virtual pilgrims’ around the world via a mixed reality experience that uses the latest Virtual and Augmented Reality technologies.

The Ocean always wins. Period. You’d be a fool not to be scared of it. There is always a risk of accidents, injury and death. So, while on the one hand, I’m sometimes kept up at night with nightmares of MAS being sunk in a storm, hit by a ship, or taken by pirates, it’s also why we need to complete our mission. I want to be able to say to people that this can be done. I want kids today to be fearless and have the determination to achieve. It’s about science and adventure. Rekindling a sense of wonder. We have to succeed.