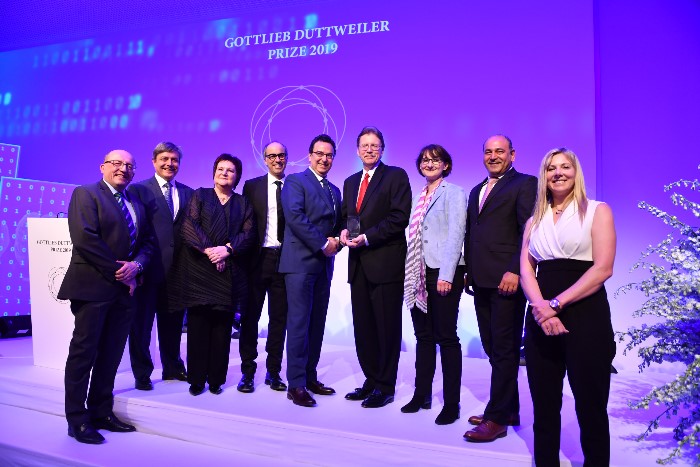 John E. Kelly III, IBM’s Executive Vice President, accepted the award on behalf of IBM during a special ceremony on May 7 in Rüschlikon. “IBM believes the promise of technology is to empower people to do good, access new opportunities and make the world better, safer and smarter—for the many, not just the few,” Dr. Kelly said in accepting the award.

“With artificial intelligence we are at an inflection point; it’s not just another continuum of another technology moving forward,” Dr. Kelly added. “We’re in a new era of computing, and we’re transitioning to technologies and machines that learn on their own and computing that does not require programming.”

Watson made its public debut in February 2011, grabbing international headlines by defeating a pair of Jeopardy! champions. To achieve this accomplishment, the team developing Watson had to overcome many challenges. Among the most vexing: The AI needed to respond quickly to questions posed in natural language, but only if it was confident enough to answer.

Natural language processing, machine learning, knowledge representation and reasoning, and deep analytics all needed to happen in time for Watson to buzz in ahead of its opponents.

Going forward, IBM’s broader goal for Watson has been to create a new generation of technology that could find answers in unstructured data more effectively than standard search technology – and do it in a way in which humans and machines work together to solve difficult problems.

“Our future depends on how humans and machines work together,” says David Bosshart, CEO of the Gottlieb Duttweiler Institute.

In 2014, Watson achieved another milestone when IBM brought AI for business into the mainstream by introducing an enterprise version of the technology. Today, IBM Watson is the most open and trusted AI for business, available to run on any environment—on premise, and in private and public clouds. Businesses can apply Watson to data wherever it is hosted and infuse AI into their applications, regardless of where they reside.

During the award ceremony, Alessandro Curioni, IBM Fellow, Vice President, Europe and Director, IBM Research – Zurich, shared with the audience of more than 350 honored guests what IBM intends to do with the prize’s 100,000 Swiss Francs.

“This prestigious prize money will sponsor four interns from Armenia, Kenya, Ghana and Uganda, who will collaborate with IBM Researchers on AI for social good projects,” Dr. Curioni said. “More specifically, they will focus on the application of AI-based skin cancer diagnosis and the development of benchmarking datasets to evaluate trust and fairness of AI models.”

What We Learned Breaking a Guinness World Record