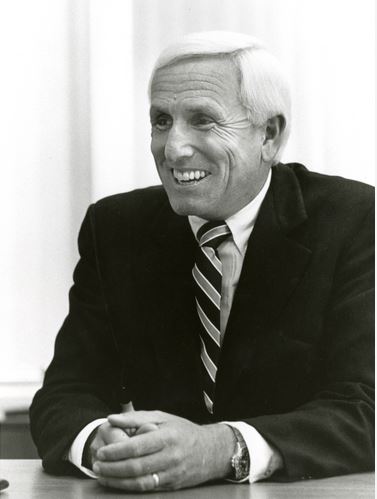 As a young boy, Spike Beitzel visited an uncle who lived on a high, windy bluff in Nantucket. He wondered why the houses in the small community were made of wood. “Rigid houses would have been knocked down years ago,” he recalled, drawing on the reference to talk about IBM. “We have to be flexible enough to change rather than be toppled in a sudden storm…. I think change is one of the strengths of IBM.”

An architect of many of those changes as IBM moved into the computer era, George B. Beitzel – known to generations of IBMers as “Spike” – died on June 26 in Redding, Conn., at the age of 90. Beitzel had a 32-year career at IBM, much of it in senior management, and he served on the IBM board for 15 years.

A native of Springfield, Penn., he was a lieutenant on a U.S. Navy destroyer before beginning his IBM career in 1955. Beitzel was quickly seen as a top sales performer and his career got a boost when Beitzel was selected to serve as executive assistant to the legendary Thomas J. Watson Jr., the Chairman of IBM, in 1961.

In 1966, he was named president of the Data Processing Group, and he went on to oversee the General Business Group and IBM’s Federal Systems Division, among others. He was elevated to an IBM senior vice president in 1972. Later that year Beitzel was named to the IBM Board of Directors – elected the same day as future IBM CEO John Opel – where he served the company until 1987.

Beitzel oversaw all corporate operations, from marketing to the company’s information systems, until his retirement in March of 1987.

Beitzel played a major role in many of IBM’s strategic decisions. For example, he let the effort to invest $13 billion in 1979 (a figure equivalent to $43 billion in today’s dollars) to improve IBM’s factories. One prominent renovation was in Lexington, Kentucky, where IBM spent $350 million (more than $1 billion in today’s dollars) to modernize its 25-year-old factory. Beitzel not only renovated the factory, but he then authorized spending $5 million to retrain Kentucky-based IBMers in the new technology.

He was an early adopter of information technology, and he invested in skills for sales teams to understand new technologies. He led specialized marketing programs for the Data Processing Group and quickly saw the new System/360 mainframe as a tool to help IBM’s clients succeed in their industries.

IBM’s then-Chairman and CEO, John Akers, saluted Beitzel’s retirement in 1987, saying, “Spike’s management know-how and judgment have been invaluable to IBM at both the national and international level. He has made substantial contributions to the company, and we will miss his leadership.”

“Spike always struck a figure of command, control and respect,” said Nicholas Donofrio, who first met Beitzel when Donofrio was a middle manager in Essex Junction, Vt. Donofrio later rose to become executive vice president for technology at IBM.  “I always found Spike to be a great listener – approachable, thoughtful and engaging. And he knew how important information technology would be to society.”

Beitzel graduated from Amherst College in 1950, where he developed a passion for education – a passion he shared as a popular guest lecturer at IBM Management School and sales seminars. He served as a trustee at Amherst for 21 years, ending in 1987; he was granted an honorary doctorate of laws from Amherst and named chairman emeritus. He also earned an M.B.A. from Harvard University and was a trustee of the Colonial Williamsburg Foundation, and he served on the boards of Bankers Trust, Phillips Petroleum and the national Boy Scouts of America.

Another one of his passions was flying, an interest he learned from working with Tom Watson, who was himself an avid pilot. Beitzel flew planes well into his 80s and several oral histories from his colleagues at IBM refer to Spike constantly offering a lift to out-of-town meetings.

“Spike was a giant in the company, one of the leaders who made IBM into a colossus,” Donofrio recalled.  “Growing IBM’s business into a global leader with a broader product line was his focus, and he never lost sight of the company’s vision or values. Spike was a gentleman in every respect, and he helped build the global IBM.”

The IBM Cloud Is Moving Quickly Across Europe