For the first time since the rise of the Internet, the epicenter of global market disruption has shifted. Up until very recently, the conventional wisdom has been that big, mature companies were on the defensive and at risk of being disrupted – and supplanted – by startups and digital challengers.

Of course, there was some truth to this. The Internet economy dissolved barriers to market access, made global reach possible for anyone with a good idea, and fundamentally altered the cost of transactions. Many established companies have struggled – some to the brink of extinction – from disruption by new entrants and digital native start-ups. 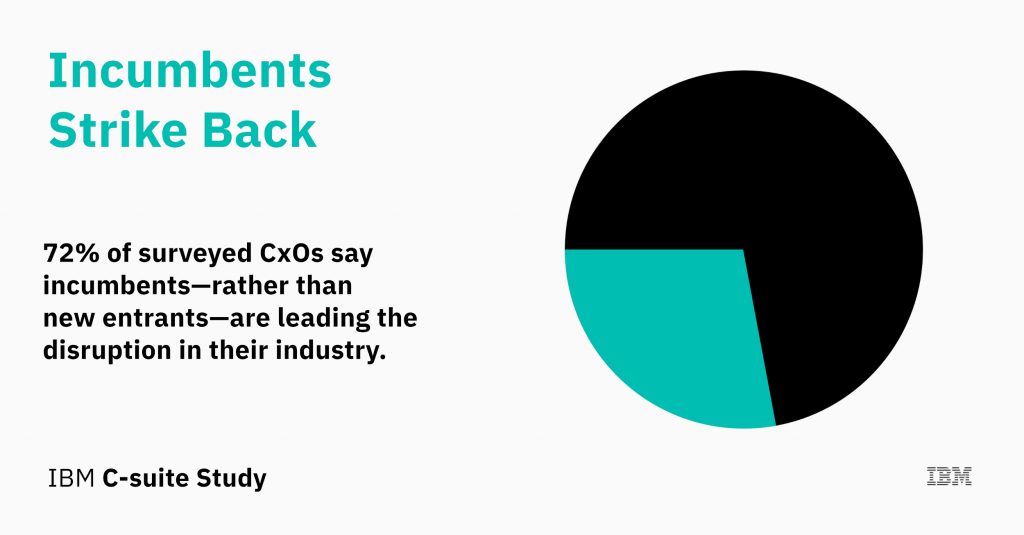 This phase, however, is now ending. We are about to enter a new era for business – one defined by “incumbent disruptors.”  In this era, companies with a past have a built-in advantage not easily replicated or leapfrogged by newcomers.

Today, at Mobile World Congress, the IBM Institute for Business Value launched a new study, “Incumbents Strike Back: Insights from the Global C-suite Study,” based on surveys and in-depth interviews of more than 12,800 C-suite executives (CxOs) across all industries and 110 geographies. The study finds that industry incumbents recognize this shift in the nexus of power for market disruption:

72 percent of surveyed CxOs claimed that incumbent organizations – rather than new entrants – are leading the disruption in their industry. By comparison, only 22 percent say smaller companies and start-ups are leading disruptive change.

IBM’s 2015 study findings showed that 54 percent of CxOs expected more competition from other industries. Just two years later, that number dropped by half to just 26 percent.

What are these incumbents doing to become the new disruptors?

The rise of the platform

The study found that 57 percent of the organizations with a strategy to disrupt are builders or owners of a platform business model. By orchestrating direct interactions between consumers and producers and gathering lots of data along the way, they are dominating their market segments and scaling in new ones.

Two key factors give incumbents an edge in the race to build platforms. First, data: Only 20 percent of the world’s data is public. The other 80 percent is enterprise data. It’s not searchable. It’s behind the firewalls of organizations and institutions …  in their workflows, supply chains, etc. It is infused with their deep knowledge, experience, expertise.

Second, the tools to harness this data are now available. AI, blockchain and Cloud — these are going to be tools that incumbents can use, not tools used against them.

For incumbents, platforms offer the chance to expand their legacy differentiation across an industry. This is the heart of the Maersk joint venture announced recently with IBM to create a digital global trade platform for shipping, built on blockchain. In another example, Volkswagen has created an open, cognitive platform to integrate services based on data it owns on fuel and maintenance needs with those from retailers, restaurants, and others, to create personalized services that learn from drivers’ preferences and habits.

Whether organizations choose to play in the platform space, they will likely be competing against those who do as platforms proliferate across every industry. To cite a conclusion in the study, the choice – whether to own or participate in a platform, or do both – is a decision that organizations are wise not to postpone.

In an age of astonishing inventions and the looming presence of AI, machine learning, virtual reality and augmented reality, it almost seemed inevitable that technology would be the leading issue facing business leaders for the foreseeable future. Not this year.

The latest study also showed the return of people as a central preoccupation of C-suite leaders. And, that preoccupation with people is both on the inside and the outside of companies. Corporate leaders are increasingly focused on their people: finding the right people, and training and retaining them in light of a growing consensus that talent moves companies.

The incumbent’s ability to hold onto a marketplace position, and ultimately grow and succeed in the long term, is wholly depended on its ability to harness the combined power of exponential access to data and transformed internal cultures to create a learning enterprise. A culture of learning goes beyond skills and training; it’s about creating an open culture and agile operations, according to this year’s study.

If there’s one takeaway from this latest look at what’s top of mind in the C-suite, it’s that competitive advantage is fleeting – and it pays to take bold steps and place big bets early to be on the right side of the next giant wave of disruption.

The Value of Focusing on Customer Centricity