How Watson Helped Me in My Battle Against Lung Cancer

I’ve worn a few different hats in my life. I don’t mind being on the road, and prefer being outdoors when I can – whether it’s working in my yard, or even hunting alligators. So instead of retiring after spending 28 years on the police force in Coral Gables, FL, I decided to go back to my first job – long haul trucking. Because the CDL requires that all drivers receive a clear bill of health, I went to see my doctor for what I hoped would be a routine physical. But when he sent me for a chest x-ray, I knew something was up.

And that’s where I first saw it. A spot in the upper lobe of my left lung.

My doctors at Jupiter Medical Center said it looked like an early-stage lung cancer, and I had a successful operation. But then after about 15 months in remission, my cancer came back.

I had what’s called a PD-L1 mutation, which meant that my body was producing too much of a protein that was effectively making the cancer grow, and only occurs in a minority of non-small cell lung cancer. We needed to find the best treatment, and this is when the oncology team introduced me to Watson. 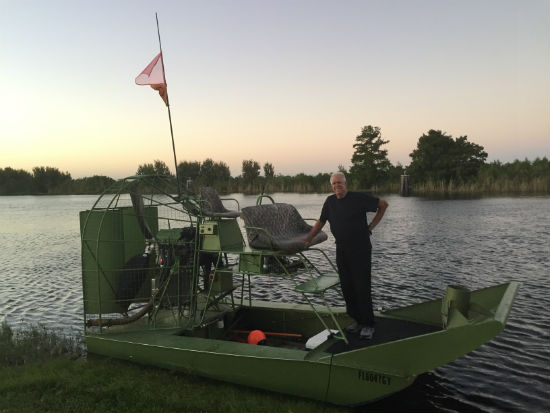 At first, I was surprised that the same technology that I knew from Ken Jennings’s battle on Jeopardy! could help in my cancer care. To be honest, I never thought of it as being more than a gimmicky gadget. But today, I am a believer.

Watson for Oncology, which my doctors at Jupiter Medical Center started using earlier this year, was able to read and understand my medical history. It came up with a list of treatment options for my doctors and me to consider, based on my individual case and training at Memorial Sloan Kettering Cancer Center. The options were accompanied by supporting evidence like oncology guidelines, medical literature, clinical trials information, and more.

At the top of the list was keytruda – and this is what my doctors had recommended as well. This is the immunotherapy that I’m on today.

For me, this meant reassurance. I knew that both my doctors and the technology had considered all relevant options. I could see the various treatment options being considered, with the evidence, side effects and other relevant details all in one place. Most importantly, the use of Watson gave me confidence and hope in the treatment for my cancer.

I may still be battling cancer, but I am not letting my treatment slow me down. If 8-foot alligators can’t stop me from living a full life, neither can cancer.

SETI Leans on IBM Cloud to Eavesdrop on the Cosmos