The name Paul J. Rizzo is unknown to most current IBMers, but Rizzo was among the titans of the technology industry. He helped lead the company during a period of tremendous growth — and then returned, during IBM’s most troubled period, to help choose a new CEO and put the company on its modern path. 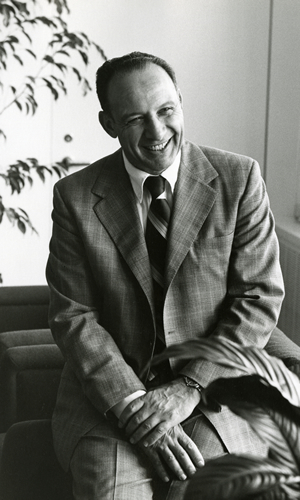 One of the builders of IBM, Rizzo died on February 23 at his North Carolina home following a long illness. He was 89.

Perhaps the most characteristic thing about Rizzo is that he remained an IBMer, even after his retirement as Vice Chairman in 1987 after 30 years of service to the company. Five years later, IBM was in the throes of a near-death experience, and the IBM Board asked him to return to help stabilize the company. Rizzo came back at the end of 1992, and stayed for more than a year to help recruit and advise the company’s new leader — an IBM outsider named Louis V. Gerstner — as he began the transformation of IBM.

“There is no doubt that I would not have come to IBM in 1993 without the benefit of several important discussions with Paul Rizzo prior to my accepting the offer to become the new IBM CEO,” Gerstner recalled. “Paul was a very important part of our early successes as we began the process of turning IBM around. Beyond his great professional contributions, he was a wonderful friend and mentor for me.”

“Paul was the quintessential IBMer circa 1950-1980, but he was anything but stereotypical,” said Nicholas M. Donofrio, who first met Rizzo when Donofrio was secretary to the IBM Corporate Management Board in the mid-1980s. Donofrio, who rose through the technical ranks to become an IBM Fellow and Executive Vice President for Innovation and Technology, remembered Rizzo as curious and insightful, with plenty of patience to dig into technology issues.

“He was never afraid to ask the hard question, to think the unthinkable and do the improbable,” Donofrio said. “Paul gave his unflagging support of IBM’s S/360 midrange systems, and he showed amazing patience to understand detail and communicate it in digestible pieces to his colleagues. He was always willing to let someone else be up front — as he was in the back making things happen.”

Rizzo told THINK Magazine that he learned how to oversee IBM’s vast development organization “by hitting the road — you can’t learn a lot sitting in a meeting. You get out and talk to people — in the branch offices, in the plants, in the laboratories. If you really want to find out what’s going on, find out from the troops.”

A graduate of the University of North Carolina, he joined IBM in 1958, the year after IBM had broken the billion-dollar revenue figure for the first time. As IBM’s business soared, so did Rizzo’s career: he quickly rose through the ranks, becoming controller seven years later, and vice president of corporate finance and planning in 1970. He was named to the IBM Board of Directors two years later when he was named a senior vice president, and he oversaw IBM’s Data Processing product group as well as the corporate finance unit.

Rizzo served 15 years on the IBM Board until his 1987 retirement, when he returned to his alma mater, where he became dean of UNC’s Kenan-Flagler Business School. But when IBM called him back to help the company survive during a troubled era, he returned to IBM’s corporate headquarters in Armonk, where he oversaw IBM’s financial operations and served as Vice Chairman of the Board from 1993 to 1994, a role he first held a decade earlier.

After his second retirement from IBM, he became partner and chairman of Franklin Street Partners of Chapel Hill, N.C. Rizzo also served on the board of directors of several companies including Johnson & Johnson, Burlington Industries, Morgan Stanley, McGraw-Hill and the tri-state region of the United Way, and as a trustee of Hollins College in Virginia and Fairfield University in Connecticut.

Rizzo summed up his leadership philosophy for THINK Magazine: “Decisions are made not by formula but by people with good ideas who do their homework and take risks to move those ideas forward.”

He is preceded in death by his wife of 57 years, Sidna. He is survived by three children and six grandchildren. He is also survived by his professional legacy — and his decision to come out of retirement and return to IBM when the company needed his leadership. He will not be forgotten by many who worked alongside him.

“I will always remember Paul for his deep and abiding love and respect for the IBM Company when he returned to it during one of the most difficult and challenging of leadership transitions,” Nick Donofrio said. “Paul Rizzo was always a force to consider, respect and admire.”

Women of Color in STEM Take Center Stage at the Oscars

Business Mobility Gets a Cognitive Upgrade with IBM Watson