Imagine a factory or warehouse where employees can work freely, no longer constrained by computer workstations or scanners that can act as chokepoints on a shop floor.

With the aid of multiple, hands-free devices, workers would simply follow real-time updates and instructions that appear in their line of sight, allowing them to work smarter and faster.

In addition to digital eyewear, picture wearables and fixed sensors communicating with each other and enterprise systems, helping employees know exactly where they need to be and what to do next – at precisely the right time. 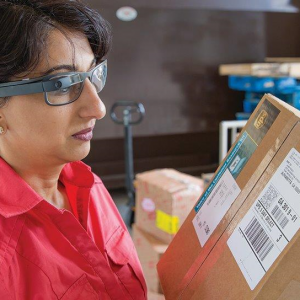 Employees and wearables work in unison, reducing error rates and keeping everyone safer and more productive.

This is the Internet of Things (IoT) in action, laying the foundation for the business practices of tomorrow.

As consumers, we rely more and more on “smart” gadgets for help in our daily lives.

Going well beyond smart phones and tablets, we are beginning to embrace wearables like fitness trackers and smartwatches. These mini-computing devices are connecting to the Internet to provide us information 24/7.

Going well beyond smart phones and tablets, we are beginning to embrace wearables like fitness trackers and smartwatches. These mini-computing devices are connecting to the Internet to provide us information 24/7.

By the year 2020, an estimated 50 billion devices will be connected to the Internet, a ten-fold increase from the number of such gadgets in use today.

Consumer demand will continue to contribute to such progress, but the real growth driver is the competitive need for businesses to imbed wearables and connected devices into their daily practices.

As the producers of goods and services, companies are at the heart of the convergence of methods, relevant data and IoT to create new models and value propositions.

Though consumer technologies tend to get more media attention, they also suffer from their own set of social constraints inhibiting adoption.

Let’s wait for how the next generation of their technology, Project Aura, and other providers target business enterprise usage.

In a business environment, we’re likely to see digital eyewear accepted as a work improvement tool, spared much of the controversy that kept consumer applications from finding a wider audience.

On a broader level, wearable tech is part of a dramatic transformation in industrial settings, a reimagining of how employees and machines can work in tandem to make supply chains more responsive.

Amid the debate about human labor in increasingly automated workplaces, wearable devices could represent the best of both worlds.

Wearable technology fills a critical need in the logistics industry.

All of this plays an important role in speeding up global commerce, which remains a goal for retailers and logistics companies like UPS.

Whether sorting and moving packages or repairing critical machinery, warehouse and logistics workers need information readily available to them in real time.

These “desk-less” workers don’t have the luxury of sitting in front of a computer all day. They are always on the move and often need both hands to do their jobs, making it cumbersome to hold a tablet or a handheld scanner.

At UPS, for example, digital eyewear could help workers update the status of a package without distracting from other tasks.

Simply looking at a parcel could capture and display relevant information while providing instant updates to others involved in getting packages to your doorstep. Mechanics could see repair history and detailed instructions while keeping both hands active.

Wearable devices aren’t new to the warehouse. For years, ring scanners have bolstered output by relieving workers of having to pick up and put down a scanner throughout the day.

But new tools like digital eyewear and data gloves, combined with beacons and sensors, represent the next step in the evolution of how computing devices are deployed to improve supply chains.

Just as IoT is creating the “connected home” for consumers, we are on the path to more connected work environments.

Before the potential of the technology is fully recognized, however, we must get past a few obstacles, such as the durability and battery life of wearables.

With the technology evolving so rapidly, compatibility standards are also needed to ensure the assortment of gadgets can seamlessly communicate with one another.

But the more we study the benefits of wearable technology, the clearer the promise becomes.

How Blockchain Will Transform Business and Society

How to Combat the Diabetes Pandemic