Africa is currently experiencing an economic upswing raising incomes and the standard of living for millions across the continent. However, as with previous African boom periods, this growth is predominantly based on the sale of natural resources and commodities making it vulnerable to fluctuations in global demand.

As I write this, the currencies of many African countries have tumbled due to economic uncertainty in China. GDP rates, though still largely bullish, have slowed. Low levels of productivity across the continent are behind the trend. Africa’s manufacturing capacity is only 1.5% according to the United Nations Industrial Development Organisation. This accounts for only 13% of Sub Saharan Africa’s GDP as published in the 2014 KPMG Manufacturing sector report. 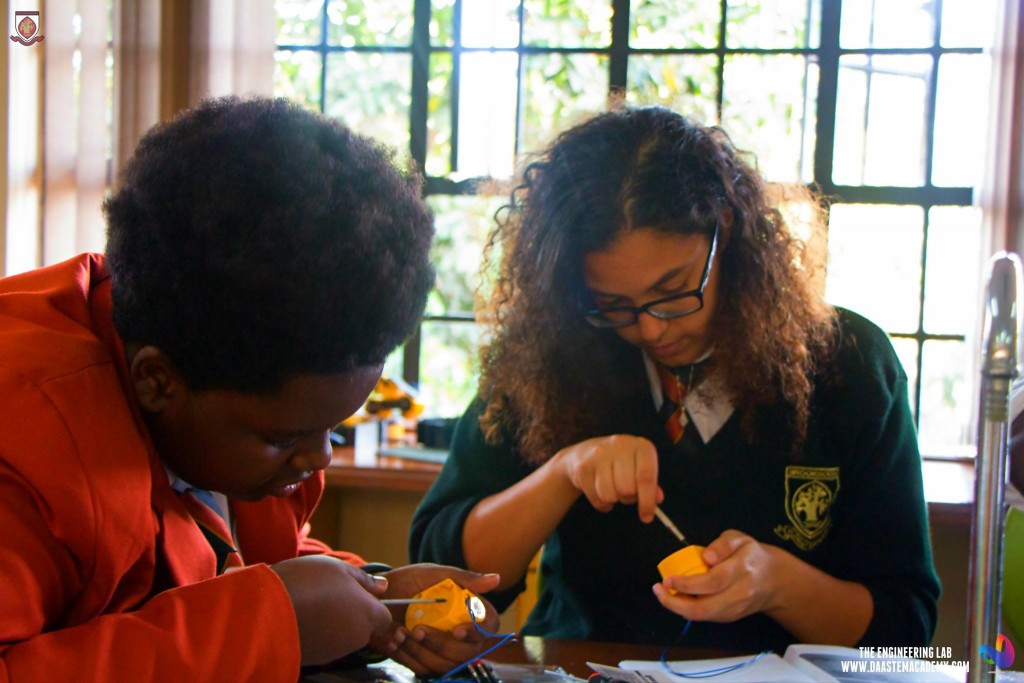 #TheEngineeringLab in Nairobi, Kenya: Students assembling the gearboxes of various modules of the robotic arm. The Engineering Lab is an afterschool program run by the DAA STEM Academy that teaches engineering in Senior and Prep Schools in Kenya’s capital.

If the African continent is to change the status quo and achieve the status of the famed “Asian Tigers”, South East Asia economies that experienced exponential growth due to rapid industrialisation – investment in Science, Technology, Engineering and Mathematics (STEM) is essential.

Africa’s lack of mastery of modern science and technology can be attributed to the current educational system and public sector policies. National curriculums are heavily skewed towards the social sciences and humanities. When I was in school in Kenya 13 years ago, ICT was just being introduced as a core subject.

During the holidays, our parents would take us to ‘computer classes’, where we learnt the basics of Microsoft Excel, HTML, Word, Access and PowerPoint. It wasn’t until then when PCs were being installed in offices and government departments in Kenya that mind-sets started to change – people realized that technology could provide you with an alternative career.

At higher education, the ramifications of the lack of emphasis on STEM at primary and secondary level are profound. As the World Bank reports, only 1% of global research is produced by Africans. Furthermore, STEM research contributes to only 29% of Sub Saharan Africa’s output.

If advanced competency in the physical sciences is not harnessed, Africa’s economic trajectory and progress can only remain modest and inconsistent –STEM education is critical to enable Africans to solve the many development challenges in key sectors such as health, power, transport and light manufacturing.

This is why I decided to set up the DAA STEM Academy which has a mission to shape the minds of the next generation of young African innovators by equipping them with the technical skills to transform Africa into a competitive global economy.  Currently in Nairobi, the Academy’s 5-year plan includes expansion into Nigeria, Ghana, South Africa and Rwanda. Our work includes running a year long after-school program, “The Engineering Lab (E-Lab) and an annual STEM Summer Program.

At the E-Lab, students as young as 8, design bespoke applications such as the #LitterBot – a robotic arm that collects and sorts litter on campus. Working in teams, each student is assigned a critical role in the assembly of different modules of the robotic arm. On completion of assembly, students begin to hack around the robot to integrate sensors, communication modules and interface Arduino and Raspberry Pi computer boards. This allows students to program intelligence into their robots to perform various tasks.

For us to achieve our desired goals, it is important for us to partner with technology leaders in the private sector. In Kenya we are lucky to be home to IBM’s 12th global research laboratory which is focussed on driving commercially-viable innovation and sparking new business opportunities in many areas key to this continent’s future including transportation, finance, agriculture,  government and, importantly for us, education.

IBM has the highest concentration of technical talent in Africa and we have struck up a collaboration with its research arm in Kenya to help build the technical capacity of young people through STEM education. IBM’s Africa lab researchers are working with us on summer school programmes and after-school activities helping to bring some of the latest thinking from around the world into Kenyan classrooms. The work closely aligns with IBM’s vision for using cognitive technologies to personalize the learning experience and help reduce drop-out rates in African schools.

While most interventions on STEM are geared towards higher education, the DAA STEM Academy has taken a nuanced approach, targeting primary and secondary educational institutions.

We work with a younger cohort as most initiatives are targeted at university students. In our opinion, this engagement and skills building needs to start at a younger age for it to thrive later, #TheEngineeringLab (E-Lab) is a year-long program that teaches students to design solutions to solve Africa’s grand challenges. The workshops are hands on and interactive, building on skills such as problem solving, critical analysis, teamwork, communication and project management.

Given the opportunity, the students quickly become very ambitious. During our program, one of our teams designed a viable GPS tracking system for collection of waste in informal settlements, Nairobi’s Kibera slum being the pilot site. Using big data analytics and satellite imagery, the application is able to notify garbage collection companies when waste collection is due. The idea struck a chord with one of IBM’s projects which uses smart phones to help Nairobi City County to better manage its fleet of waste collections vehicles while collecting data about the condition of the city streets.

Whilst the Academy is making great strides since its inception two years ago, greater impact will be felt when education ministries across the continent integrate STEM into mainstream curriculum helping to produce the future technical problem solvers that Africa so badly needs to increase productivity

Working with leading technology companies like IBM Research – Africa, we are determined to play our part in laying the foundations for Africa’s future and help develop the next generation of Young African Engineers and Scientists who will lead the way.