Reskilling for Robots: AI and the future of jobs

What do you need to do to prepare for an AI driven future?

Just five years ago, the late scientist Stephen Hawking made a dire prediction: The “development of full artificial intelligence (AI) could spell the end of the human race.”  These ideas are not new. In 1867, Karl Marx wrote, “The instrument of labour, when it takes the form of a machine, immediately becomes a competitor of the workman himself.” These are the quotes which make headlines and echo the language of science fiction movies which show a world dominated by machines. So, let’s get this out-of-the-way now:  Robots are not going to spell the end of the human race, but AI technology has the potential to transform the labor market by eliminating some jobs, creating new jobs and making most jobs better.

History is on our side: technology increases opportunities

There is ample historical evidence that technology creates more jobs than it destroys, but it also leads to employment shifts. Just as the combine harvester supplanted the scythe, clocks replaced the sundial and electric lights extinguished the candle, the personal computer recently replaced the ledger book.  But, according to McKinsey, it enabled the creation of 15.8 million net new jobs in the United States alone since 1980, even after accounting for jobs displaced. About 90% of these are in occupations that use the PC in other industries, such as call-center representatives, financial analysts and inventory managers. Rising productivity is typically accompanied by employment growth: it raises incomes, which are then spent, creating demand for goods and services across the economy.

According to a new report from the World Economic Forum, machines and algorithms in the workplace are expected to create 133 million new roles, but cause 75 million jobs to be displaced by 2022.  If you’ve done your math, you’ve calculated the growth of artificial intelligence could create 58 million net new jobs in the next few years.

And a PwC study of the labor market in the United Kingdom found artificial intelligence (AI) and related technologies will generate as many jobs in the U.K. as they displace over the next 20 years. The research states that while AI could displace roughly 7 million jobs in the country, it could also create 7.2 million jobs, resulting in a modest net boost of around 200,000 jobs.

These new reports are echoed by a comprehensive, longitudinal study by David Autor from MIT Department of Economics and Anna Salomons from Utrech University School of Economics for the European Central Bank. The study was  conducted in 19 countries over 35 years. The researchers looked at the relationship between productivity growth and employment and found industry-level employment falls as industry productivity rises, implying that technically progressive sectors tend to shrink. But then they discovered, simultaneously, country-level employment actually grows as aggregate productivity rises. The takeaway: Job opportunities will shrink in some areas but grow in others, having little impact on the overall number of jobs.

The Autor/Salomons study also showed that wages of less-educated workers in the United States and Germany have fallen sharply over the last two to three decades despite a steep reduction in the non-college share of the working age population. So, even though the overall labor market demand for workers may not change, AI will likely directly reduce the demand for certain skills which will be automated. Low demand equals low wages.

An American study supports this: Two years ago, a US Government report titled “Artificial Intelligence, Automation, and the Economy” predicted 83% of United States  jobs in which people make less than $20 per hour are now, or soon will be, subject to automation.

The advent of computers and the Internet raised the productivity of highly skilled workers, but it had a negative impact on predictable tasks and roles like  travel agents, bookkeepers, and telephone switchboard operators, not to mention manufacturing assembly line jobs.  So what will AI automation do to the labor market? Recent research shows the effects of AI in the near term will continue the trend technology innovations have driven in recent times. Some tasks will be easily automated away, some jobs will be made better from automation and new jobs will be created.

No question, the jobs landscape will look different than it does today as lower-skilled jobs become automated. The World Economic Forum’s “Future of Jobs Survey,” shows the most likely view of the roles which are trending: 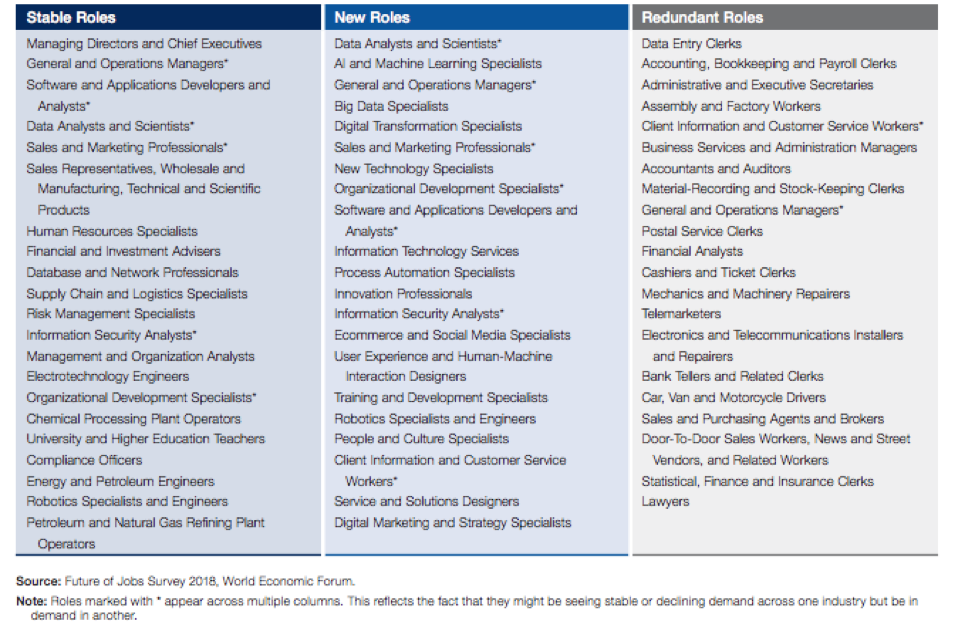 New jobs: Who will mind the robots?

Who will mind the robots? In an MIT Sloan article, Accenture describes new categories of human jobs emerging, requiring skills and training. They identified an emergence of new, uniquely human jobs, requiring skills and training that have no precedents. These AI-driven business and technology jobs will require human beings to complement the tasks performed by cognitive technology and ensure the work of machines is effective, fair and transparent:

Trainers — Trainers will help natural-language processors and language translators make fewer errors.. They will also teach AI algorithms how to mimic human behaviors. Think about chatbots. Who will train them to speak in a natural language and even show empathy?

Explainers — Explainers bridge the gap between technologists and business leaders. As technology becomes more opaque, business leaders will need explainers to explain complex algorithms to nontechnical professionals. The European Union’s General Data Protection Regulation (GDPR) create’s a “right to an explanation” for consumers who question decisions made about them by computer algorithms.

A reskilling imperative, but who is responsible?

But who is responsible?  There is an unquestionable need to take personal responsibility for your own lifelong learning. Don’t count heavily on employers. Most companies are adopting three strategies to manage the coming skills gap created by emerging technologies:

However, nearly a quarter of companies are undecided or unlikely to pursue the retraining of existing employees. Fully two-thirds expect workers to learn on their own in order to stay relevant, and nearly two-thirds say they will hire temporary staff and freelancers.

Where will government fit in?

If 83% of U.S. jobs in which people make less than $20 per hour are now, or soon will be, subject to automation, how will governments respond? Public policy will play a significant role in shaping the direction and effects of technological change. Economic incentives, education reform and immigration policies will have a direct impact on productivity, employment levels and improved economic mobility and incentives.

Government agencies can collaborate with industry partners and education institutions to shape programs which prepare new workers to thrive in an AI-driven world. These programs would have the potential to directly impact the inequality which could emerge by driving education and training programs which will help everyone succeed. Programs must start early and ensure children can develop relevant skills and continue through lifelong reskilling programs for people who must transition to new roles. The financial incentives for governments to create these programs is high; without them, unemployment costs could be considerable.

In the United States, the Trump Administration is tackling this head on with the creation of the American Workforce Policy Advisory Board. The board brings together 25 prominent Americans, including Ginny Rometty, CEO, President and Chairman of IBM, promising to create more than 6.5 million education, training and skill-building opportunities over the next five years.

“Emerging technologies like artificial intelligence will change the way every job is done,” IBM CEO Ginni Rometty, said. “I look forward to finding new ways for all Americans to participate in this digital era by building the job skills that are already in demand in our economy.”

How to AI-proof your life? Develop your uniquely human skills

As AI becomes more prominent in the workforce, human capital can be unleashed to focus on less manual and more innovative tasks. In addition to the new technical jobs which will emerge because of AI, distinctly human skills, like creativity, originality, analytical thinking and innovation will rise in importance while memory-related tasks and manual work will be performed by robots.

Then, how do you signal your skills in an AI world?

Increasingly, companies are using HR systems to take inventory of the skills their employees possess. These systems rely on inference by developing profiles based on skills developed in learning activities, articles written and questions answered in online communities.

But now, there is a new way for employees to signal their unique skills: Digital Badges. IBM awards digital badges for completing a training class, winning an award, taking an exam or participating in an activity. Digital badges are embedded with rich metadata, including information about the activity, such as the skills which were developed or exhibited. These badges are machine readable and can provide a deep, granular skills profile for an individual. Digital badges make it easy for employees and  job candidates to broadcast their achievements. At IBM, we have issued more than one million digital badges in every country in the world, creating a skills registry to show where the skills are – and where they are not.

The future for AI is bright – if we take action

AI is already creating new opportunities for individuals, and society, and the global economy and is solving real problems. But, like any new technology shift, AI has the potential to disrupt the current livelihoods of millions of people. Whether AI leads to unemployment and increases in inequality depends less on the technology itself, but more on the institutions and policies that are in place at the corporate and government levels. Companies must prepare for massive reskilling, governments must create programs and policies which lift the unskilled and individuals need to take personal responsibility for their skills growth.

IBM is a leader, making the IT industry more inclusive

With its emphasis on new collar jobs – skills over degrees — IBM is working to make the IT industry more inclusive, where skills are more important than degrees or geography. Innovation programs like the IBM Digital Badge Program, the IBM Skills Gateway and the IBM New Collar Certificate Programs are expanding the opportunities to develop the skills needed to prepare for a career in IT.

IBM hosts a series of free professional skills courses which have been determined to represent core, distinctly “human” skills needed in the modern workforce. These online courses are part of a new Professional Skills category on IBM’s training website, and they can be accessed online on the IBM Skills Gateway. The courses each take less than two hours and are available today. As an added benefit, you can receive a free digital badge from IBM upon successful completion.

That is just one area where IBM is creating opportunity to build skills. To find out more, please join the conversation on our websites and social networks:

To contact one of our authorized IBM Global Training Providers or to search for IBM courses that use official IBM created content, please visit ibm.com/training

David Leaser is the senior executive of strategic growth initiatives for IBM’s Training & Skills program. Leaser developed IBM’s first cloud-based embedded learning solution and is the founder of IBM’s Digital Badge program. He served as the senior marketing lead for the IBM Smarter Workforce. Leaser is a Fellow at Northeastern University and a member of the Digital Learning Consortium and the IMS Global Consortium Board Advisory Group for Digital Credentials. He has provided guidance to the US Department of Labor and the US Department of Education as an employer subject matter expert and is a frequent lecturer, speaker and panelist at events. He holds a bachelor’s degree from Pepperdine University and a master’s degree from USC’s Annenberg School. You can reach David on LinkedIn or Twitter @david_leaser.

The case for lifelong learning

How long do learners expect eLearning to be?

Overview eLearning can be just as effective as instructor lead training if it is done well although some people may argue with this statement. Researchers like Derouin (2005) and Paul (2014) and others have already confirmed this years ago with academic research. The key is that eLearning needs to be well-executed but there is not […]