Business in America faces a moment of reckoning. Racial inequity, long endured and long decried by those most affected, has moved to the front of corporate, social and political agendas, even as Black Americans face continuing assaults.

The coronavirus pandemic hit the Black community with disproportionate impact, both in terms of the health toll and the economic toll. Concurrently, a wave of violence crested, crystalized by the tragic and brutal deaths of George Floyd and Breonna Taylor, among other Black Americans. The widespread social justice protests that followed were often met by hostility.

Many business leaders have taken steps in response, announcing new and enhanced diversity, equity and inclusion (DEI) and anti-racism programs. After years of keeping silent, many Black executives are openly sharing—for the first time—their experiences of racism with their co-workers. Yet corporate America’s top ranks look nothing like the country they serve. Of the 279 top executives listed in proxy statements for the 50 biggest companies in the S&P 500 in July 2020, only five, or 1.8%, were Black, including two who recently retired. 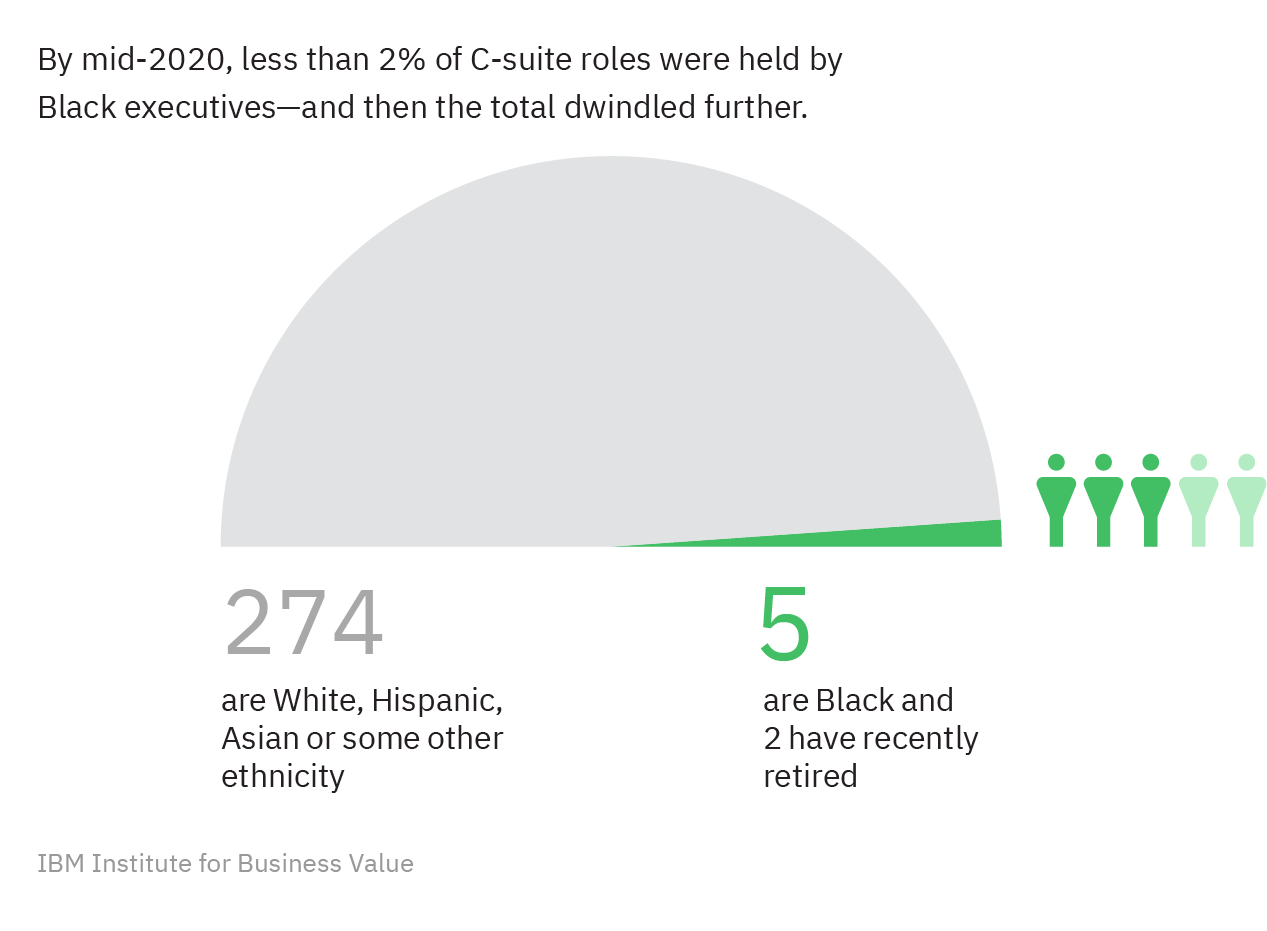 The road to racial justice

Black history in America, typically omitted or overlooked, often requires extra work from Black people to retell the narratives, add vital context, and infuse years of collective cultural wisdom to understand present-day conditions. Black Americans are in a unique position because Black is both a race and an ethnicity.

We use the term Black to be more inclusive of the culture and community, and specifically to recognize people of African descent who live in the Caribbean or West Indies, as opposed to saying African-American. When Black people were taken from Africa and spread out all over the world, their unique identity and culture was stripped away upon arriving in America. Descendants of slaves emerged with new cultures depending on their location—those locations are what informed their culture.

A sense of place has deeply shaped Black history and culture. The Black Migration sets Black people apart from other races and created different cultures within the Black community. By separating Black people by race and region, Black Americans forged their own history, culture and society against unimaginable odds.

The entire history of America has been based on racial categories and determined where you can live, who could own land and how you were taxed. And we can’t tell the story of America without telling the story of Black people and their contributions in shaping America’s identity from technology to music to food to fashion and popular culture.

However, we live in a society where Blackness is often associated with negative traits. A society where racism and racial anxiety has existed for more than 400 years. Class and economic anxieties do not erase racial ones in our current climate with COVID and social unrest—they transcend these anxieties.

Amid the turmoil of 2020, the IBM Institute for Business Value (IBV) surveyed more than 1,500 Black executives and business leaders, between May 220 and January 2021, comparing the results to a similarly composed survey of White executives and business leaders. The results point to continued obstacles for Black Americans, as well as glimmers of hope that improvement and progress is underway.

The Black experience in business is still vastly different than that of their White peers. The evidence is startling.

Our survey shows that:

Pervasive discrimination persists throughout society, and in the workplace.
Most of the Black American business leaders (90%) we surveyed report personal experience with discrimination based on their race. While the numbers of people who have experienced bias at work aren’t as high, they remain shockingly bad: 56% say there is discrimination at their workplace against Black people, and 33% say that race is the primary driver of discrimination they have personally experienced at work. Given that, it is perhaps unsurprising that only have as many Black business leaders feel are less than half as likely to feel empowered to overcome professional challenges as their White counterparts.

Career support for Black professionals is inadequate.
Black business leaders point to the criticality of mentoring, sponsoring and other career support as essential contributors to success. Yet our survey reveals that far fewer Black than White workers experience workplace benefits such as on-the-job training, mentoring, and employer-funded continuing education.

Anti-racism has established a toehold.
If there is a silver lining to persistent workplace discrimination, it is recognition by White business leaders of the challenges facing other populations. In fact, 76% say they believe racial bias exists in society, and 51% of White survey respondents acknowledge there is discrimination against other racial and/or ethnic groups at their workplace.

And wellness efforts aren’t connecting.
With Black Americans bearing the brunt of COVID-related health and job impacts, corporate commitments to wellness are of particular importance. Unfortunately, those efforts are not connecting. In another recent IBV study, 80% of executives reported that their companies were supporting the physical and emotional health of employees; however, only 46% of employees agreed.

And yet, corporate diversity efforts lag aspirations.
In IBV’s recent 2021 CEO study, CEOs expressed strong positive conviction that a workplace championing diversity and inclusion (D&I) is a central criterion for leadership. But when it comes to putting that conviction into action, D&I was noted as a measurable part of financial performance by only one in four respondents. Among the most important organizational attributes for engaging employees, D&I ranked near the bottom of a 13-choice list.

The technology gap must be closed.

Analysis of the data suggests that Black executives are more apprehensive about new technologies than their White counterparts, and are more wary about how those technologies are being developed and made available in their communities. Given that technology is consistently identified as the most important factor for future competitiveness and success in the IBV’s 2021 CEO study, this is a gap that must be closed.

But corporate efforts here aren’t meeting expectations either: While 74% of executives in another recent IBV study report that their organizations are providing adequate training on how to work in new ways prompted by the pandemic, only 38% of employees agree.

Data shows that Black professionals face obstacles to achieving success that begin in primary and secondary school, and extends from the consumer marketplace to government and public services. The fact that our survey respondents have succeeded in business makes their perspective all the more insightful and important.

It also underscores the missed opportunities, for both individuals and businesses, in not engaging more Black talent. The shortcomings that exist in corporate environments limit the performance potential and business impact of a critical segment of the business workforce. Addressing these shortcomings requires ongoing and concerted action..

“Diversity is a fact. Equity is a choice. Inclusion is an action. Belonging is an outcome.”
—Arthur Chan

Black Americans in the workplace

Black American business leaders in US workplaces surveyed by the IBV comprise a wide spectrum of professionals—senior executives, senior managers, junior managers, and entrepreneurs. These individuals have already achieved professional success and are on a career path to achieve even more. One of the goals of this study is to identify the behaviors, tools and motivations that help fuel these success stories.

So what is it that has driven business success among these Black business leaders in the US? The #1 motivation cited by respondents is passion for their job. The #1 goal: creating positive change—ranked higher than other self-motivated objectives, such as achieving financial security, power, or even personal happiness.

As a group, the Black leaders we surveyed are committed to having a positive impact. They cite hard work and intelligence as the most important personal attributes that contribute to success in American society. And they rank communication skills and personal organization skills as #1 and #2, respectively, as the most important skills for success.

In terms of behaviors and practices, the top-cited activities that fueled their personal success are continuous learning, goal-setting, and team-building. The people most influential in inspiring their success: other business leaders, who are rated even higher than respondents’ own parents. This latter point underscores the importance and impact of business-based role models and mentors in inspiring Black American success stories.

And this is an area where businesses can make an immediate and tangible difference. According to our survey, only 41% of Black American business leaders say they have benefited from on-the-job training or skilling, compared with 59% of White business leaders. Only 37% of Black leaders say they’ve benefited from formal mentorship, and 27% from informal mentorship, versus significantly higher 56% and 41%, respectively, for their White counterparts.

And that pattern continues, whether related to sponsorship or employer-funded continuing education. In precisely the areas where promising Black talent might be most activated, employers are consistently falling short, unevenly applying their support mechanisms.

The greatest inspiration for Black business leaders' success is other business leaders. This reflects the importance of business-based role models in Black American success stories.

Discrimination in the workplace

When it comes to the deeply disturbing personal experience of discrimination, 90% of Black respondents reported personally experiencing discrimination because of their race at some point in their life journey. Race-based bias far outweighs other biases based on gender, socioeconomic status, political views, age, sexual orientation, or any indeed any other factor we measured.

45% of respondents say that race was the primary driver of discrimination they experienced during school, 44% in public settings, 32% in private social settings, and 33% in their local community.

The workplace may be less biased than some other areas, but not much: 33% of Black respondents say that race/ethnicity has been the primary driver of discrimination they experienced at work. And they report having to work harder to succeed because of their identity. 58% of Black leaders say America is unequal today versus 29% of White respondents and 56% of Black leaders tell us that things are not improving over time. It’s disheartening: they believe their experiences with discrimination are similar to those of previous generations.

Organizations have struggled to create inclusive environments where Lakeisha and Darnell feel comfortable bringing their whole selves to work the same way that Emily and Greg do.