It has become something of a cliché to hear that the pace of change in business continues to accelerate. Yet based on the evidence from thousands of in-depth interviews with senior executives, it’s apparent that there is some truth to the claim.

At the very least, the widespread availability of near real-time information from multiple sources — whether traditional or social media — has greatly increased awareness about what’s going on around us.

C-suite executives tell us they are heavily influenced by the changing nature of the external environment and that their business strategies should follow suit. But just what are these major trends that are having the most impact on business? How dynamic are the changes that are taking place? And given such fluidity in the external environment, are traditional strategy planning cycles too rigid?

Since 2013, we have asked executives which major business trends they anticipate will drive their enterprise to develop new strategies. Industry convergence — the merging of industries as suppliers, distributors, customers and competitors cooperate in ecosystems created to develop new products and services — was clearly the most significant driver to emerge from our last study.

This year, we have been able to track how different participants answered this question during each month of the year, to see if any major world events altered perceptions about what business leaders viewed as being most important. While there have been a few ups and downs from month to month, what is more noteworthy is the dramatic shift in overall position over time in some key areas.

For example, the industry convergence trend began 2017 considerably less important to executives than two years ago. But it began to rise later in the year as the breakdown of traditional industry boundaries and barriers again became the predominant factor affecting how business leaders plan to shape their organizations. 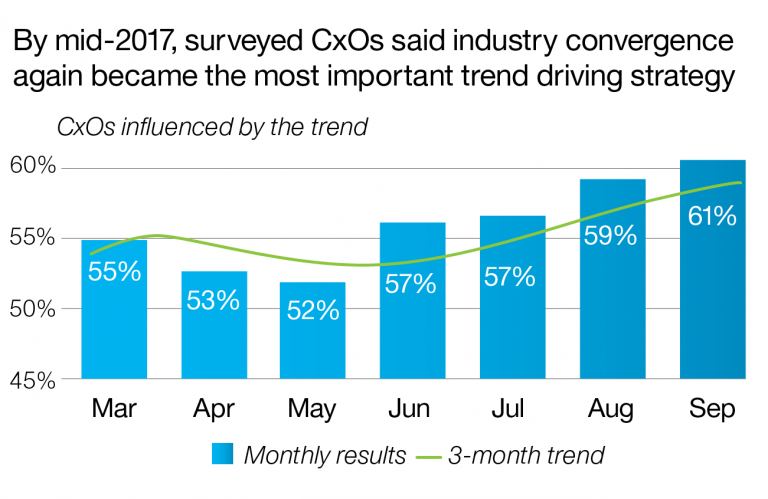 As convergence rises, two other trends are falling down CxOs’ list of concerns: cyber risk and the Sharing Economy. Despite a variety of highly publicized security breaches occurring throughout the year, the perception of the threat that they pose to CxOs and their businesses continues to drop. Either executives feel they are already taking adequate steps to protect their systems and data, or an incident needs to take place closer to home before it gets pushed back up the C-suite agenda. 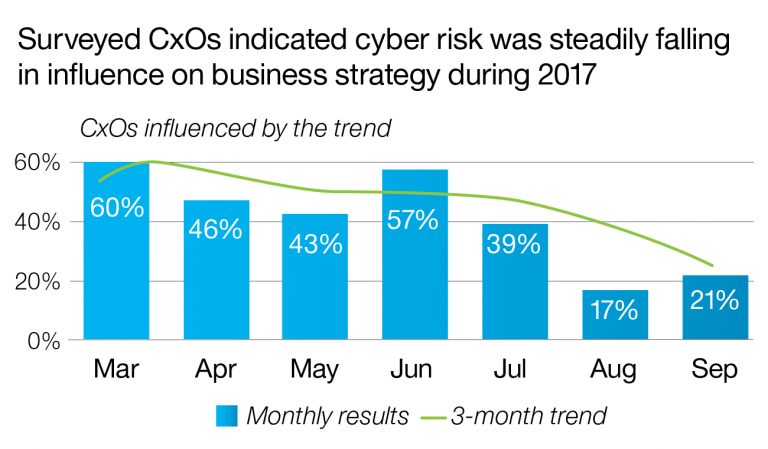 The Sharing Economy is following a similar rapid downward trajectory. This collaborative economic model, in which customers share, borrow or rent assets owned by someone else, is exemplified by Uber, Airbnb and Lyft. These disruptors shook up their respective markets so dramatically that many other sectors feared they might be next.

But while many startups have focused on creating the next big idea using this model, success requires far more than a cool app. Creating an ecosystem is hard — especially one that can upset an industry value chain. The fact that no similar disruptors have come on the scene in the last 12 months with anywhere near the same impact must be why the Sharing Economy