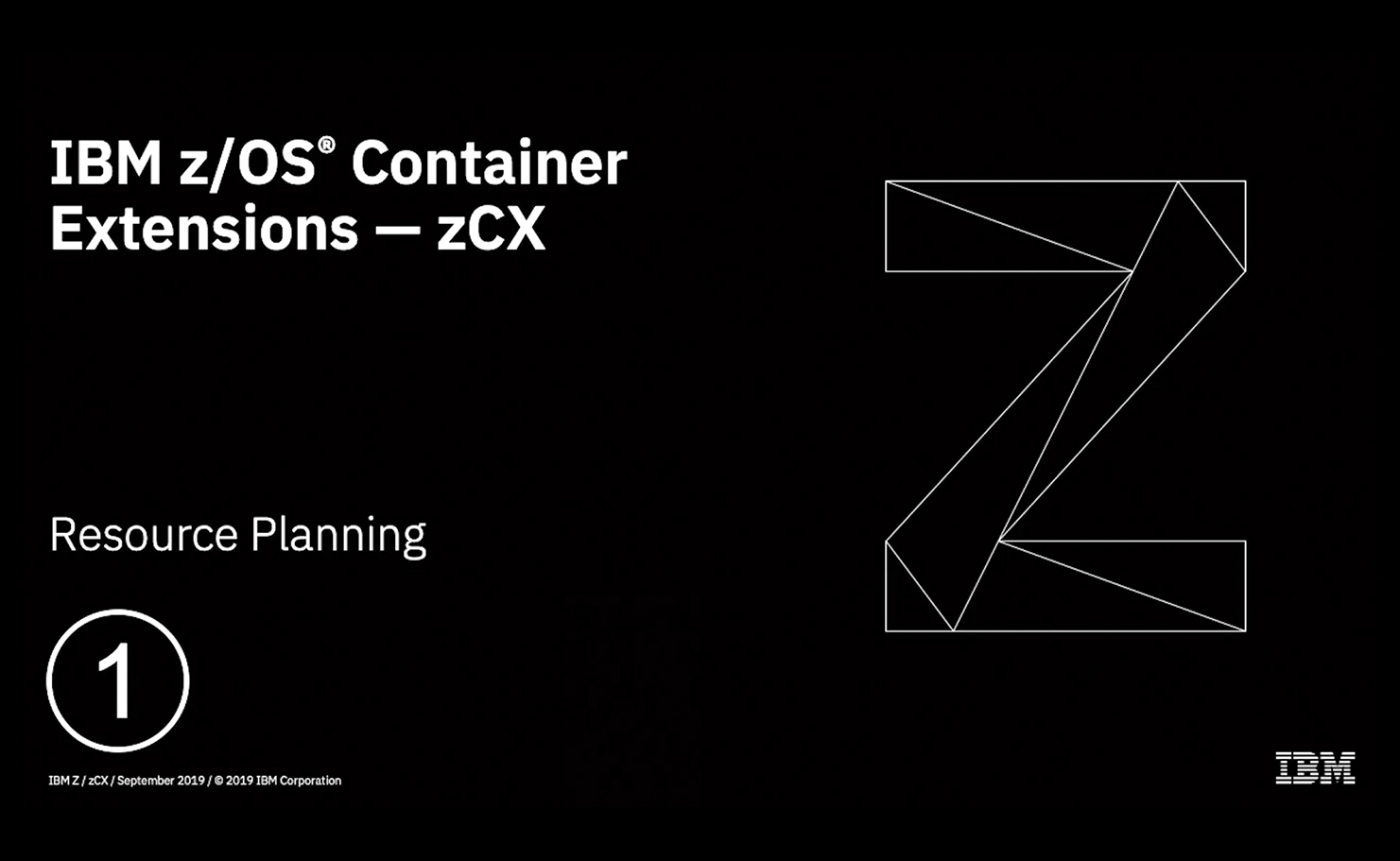 IBM provides a Linux distribution configured to run Docker CE. IBM supplied support code will simplify installation and operation. Clients can participate with their own Linux applications that can easily be packaged in Docker format and deployed in the same way as open source, IBM, and vendor packages. Container Extensions runs on IBM z15â ¢ and z14â ¢ systems.

Decide whether zCX is the right solution for you.

Prepare your system and plan for your zCX instance.

Deploy your first Linux container in your zCX instance.

Manage and maintain your zCX instance.

How to get started with z/OS Container Extensions (zCX)

Use the following resources and references to consider whether zCX is the right solution for your IBM z/OS system.

See what others think about zCX

Start the zCX Trial to experience zCX in your own environment without purchasing the hardware feature code. The zCX Trial enables full zCX capability for 90 days on your z/OS 2.4 and z14 or higher. Download APAR OA58969 to start the trial.

Learn more about the zCX Trial

Now that you have decided to use zCX, it is time to prepare your system to support zCX and plan for your zCX instance. zCX requires IBM z14â ¢ or later release servers with the Container Hosting Foundation (feature code 0104). zCX also requires z/OS V2R4 with the z/OS Management Facility (z/OSMF) configured and running on your system.

Use the steps below to help your z/OS team decide on allocations and variables needed for your zCX instances.

To prepare a software services template and provision software, you perform these steps using the Software Services task of z/OSMF.

Once all the decisions in the planning phase have been decided, you are ready to provision your zCX instance using a z/OS Management Facility (z/OSMF) workflow.

The first workflow step asks you to provide the information needed to provision your zCX instance. You can input the variables manually, or using a workflow variables input properties file that you prepare beforehand. The remaining steps of the workflow can be automated.

See the variables needed to provision a zCX instance.

If you do not have z/OSMF installed on your system, use the z/OSMF Configuration Guide.

Now you are ready to log in to your zCX instance and deploy a Docker container.

If you are using local user management, you must create and give permission to anyone who will be using the zCX instance.

z/OSMF has additional workflows to manage the lifecycle of your zCX appliance, including deprovisioning a zCX instance.

There is diagnostic information available for zCX should you encounter any problems.

Q: What are the benefits of z/OS Container Extensions?

A: z/OS Container Extensions expands and modernizes the z/OS software ecosystemto include Linux on Z applications. Most applications (including Systems Management components and development tools) that are currently only available to run on Linux will be able to run on z/OS as Docker containers.zCX runs Linux on Z applications on z/OS, using existing z/OS operations staff and reusing the existing z/OS environment. zCX maintains operational control within z/OS and z/OS Qualities of Service (scalability, availability, integrated disaster recovery, backup, WLM, and integration with z/OS security).

Q: Do application developers require knowledge of z/OS to create and deploy Linux on Z applications to run in z/OS Container Extensions?

A: Applications will look like Docker applications to the developer, not z/OS applications. If your application comes from Linux on Z, then no z/OS skills are required. Docker and Linux knowledge are all that is required.

Q: What are the costs associated with z/OS Container Extensions?

A: zCX is a base element of z/OS.There is no additional software cost for zCX itself beyond z/OS.Associated costs are hardware(z14, FC 0104, optionally zIIPs) and any software licensing of Linux on Z applications running inside zCX.

A: You can use the 90-day zCX Trial no more than one time per sysplex. The sysplex can span multiple CPCs.

Q: Does Container Extensions make use of Kubernetes?

A: No, not at this time. The initial release of zCX for IBM z/OS V2.4 provides Docker Swarm as support for Docker cluster management. IBMâs future plans intend to include Kubernetes clustering for the orchestration, scalability, and management of zCX with compatible cloud platforms.

Q: How is Container Extensions different from Linux on Z?

A: zCX gives z/OS environments the ability to deploy Linux on Z applications as Docker containers for workloads with an affinity to z/OS. It is not a replacement for traditional Linux on Z environments.

Q: On which engine types can z/OS Container Extensions run?

A: z/OS Container Extensions address spaces are zIIP-eligible. Most zCX processing (including Docker containers deployed within zCX) can be dispatched on available zIIP processors. Some zCX processing will be dispatched on standard processors. This will generally be a much smaller percentage of processor cycles compared to what can execute on zIIPs. Running the Acme Air benchmark on zCX, up to 98% of the zCX CPU consumption was measured to be zIIP eligible.*

A good first assumption is that the new work running in the zCX environment will be 95% zIIP-eligible. However, your zCX environment may be more or less zIIP eligible depending on characteristics of the workload. Capacity planning should be based on the measured zIIP eligibility of your specific zCX applications. zCX can be deployed exclusively on standard processors if no zIIP processors are available. See "Exploiting zIIP and general purpose processors for zCX workloads" in the IBM z/OS Container Extensions Guide for more information.

* Results were extrapolated from internal IBM benchmarks performed in a controlled environment using a single z14 z/OS 2.4 LPAR with TCP/IP inbound workload queuing (IWQ) for inbound traffic and two zCX containers: one running Node.js and one running a MongoDB database. zIIP eligibility is based on the CPU consumption of the work running on the zCX address spaces and the associated work on the TCPIP and VTAM address spaces. Results may vary.

Q: What can run in z/OS Container Extensions?

A: Anything with s390x architecture (the IBM Z opcode set) in Docker hub can be run in zCX. The code is binary compatible between Linux on Z and Container Extensions.

In addition to open source packages, there will likely be IBM and third-party software available. It is intended that clients can participate with their own Linux applications, which can easily be packaged in Docker format and deployed in the same as open source, IBM, and vendor packages.

A: Yes, whatever PVU licensing is in effect forIBM software in the traditional Linux on Z environment is also in effect for zCX. Both General Purpose and zIIP engines are counted as cores.

A: Yes, sub-capacity pricing is supported through the IBM License Metric Tool (ILMT).

For more information on ILMT enablement on zCX, refer to: https://www.ibm.com/support/knowledgecenter/en/SSLTBW_2.4.0/com.ibm.zos.v2r4.izso100/izso100_ilmt.htm

Use of the ILMT tool is now mandatory for sub-capacity pricing for the zCX environment. Manual reporting is no longer acceptable.

Q: What are some zCX use cases?

Q: Will there be performance data published for zCX?

A: There is currently no plan to publish performance data for the zCX environment because performance is heavily reliant on individual configuration, workload, and networking characteristics.

Q: Are there samples and resources that I can look at to get started?

A: Yes. Visit the Open Mainframe Project, Ambitus, for samples, build recipes, and other resources to promote collaboration and knowledge sharing of open source technologies to modernize and expand the IBM Z platform.

Additional resources and documentation for z/OS Container Extensions will be available on this page as they are released. For now, learn about Containers, Docker, and z/OSMF using the links below.

Learn about z/OSMF and workflows

The Perfect Marriage of Linux Software and z/OS in IBM Systems Magazine.

Find the answers for Frequently Asked Questions about zCX.

Episode 77 of Terminal Talk by Frank and Jeff features Joe Bostian of IBM Z discussing open source on Z.Search for âTerminal Talkâ in iTunes, Google Play, or your favorite podcast app, or click the link below.

Learn about Docker containers through the Resources tab on Dockerâs website.

Get started on your journey to hybrid cloud with IBM Z.

Learn how to onboard and leverage z/OS Container Extensions in a custom workshop.

A demonstration of how to provision zCX using z/OSMF

An introduction to understanding and using Docker

Getting started with z/OS Container Extensions and Docker

Install, configure, and use the IBM z/OS Management Facility (z/OSMF).

Transforming a Corporate Datacenter into a Modern Environment: Kubernetes as a Foundation for Hybrid Cloud.

A Grafana dashboard template for monitoring your zCX instances.

Learn about the 90-day zCX Trial.

Understand configuration and impacts of zCX in the V2R4 report.

A demonstration of Docker image development in zCX.

A demonstration of using JupyterHub and zCX.

Learn how IBM used zCX to modernize our own internal tool.

Added new resources to the About zCX and Use cases tabs of the Technical resources section.

IBM Systems Lab Services was added to the About zXC tab of the Technical resources section.

Tutorial video of Docker image development in zCX was added to the Tutorial & instruction tab of the Technical resources section.

Third tab of Technical resources section was changed from Events to Use cases.

Example video of using JupyterHub and zCX was added to the Use cases tab of the Technical resources section.

IBM Z Hot Topics article on the 90-day zCX Trial was added to the Tutorial & instruction tab of the Technical resources section.