Passive debiasing is the work that Watson OpenScale does by itself, automatically, every hour. It is considered passive because it happens without user intervention. When Watson OpenScale checks bias, it also does a debiases the data. It analyzes the behavior of the model, and identifies the data where the model acts in a biased manner.

Watson OpenScale then builds a machine learning model to predict whether the model is likely to act in a biased manner on a given, new data point. Watson OpenScale then analyzes the data that is received by the model, on an hourly basis, and finds the data points that cause bias. For such data points, the fairness attribute is perturbed from minority to majority, and the perturbed data is sent to the original model for prediction. This prediction of the original model is used as the debiased output.

Watson OpenScale debiases all the data that the model receives in the past hour. It also computes the fairness for the debiased output, and displays it in the Debiased model tab.

After you ensure that your model is set up for indirect bias analysis, you can view results of the analysis: 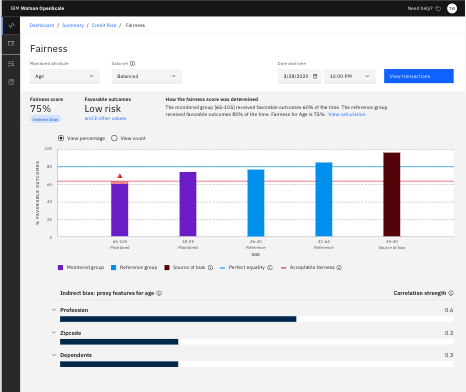 The correlated features start out collapsed. The correlation strength is presented following the feature. The tooltip describes the proxy features. The most relevant three features are displayed. Expand each feature to see values for the three lowest monitored groups and three highest reference groups. For each group, the three most-frequent values and the number of favorable outcomes for that class are displayed.