Before setting up a geographically dispersed Db2® pureScale® cluster (GDPC), a number of conditions must be met. 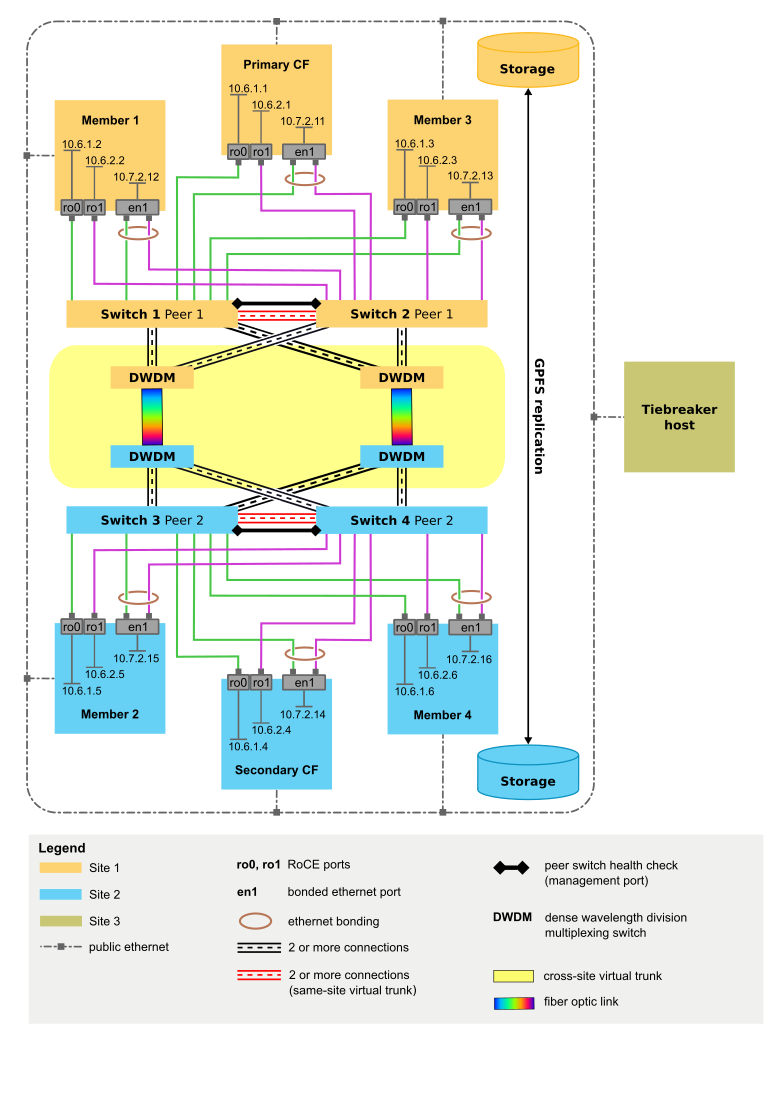 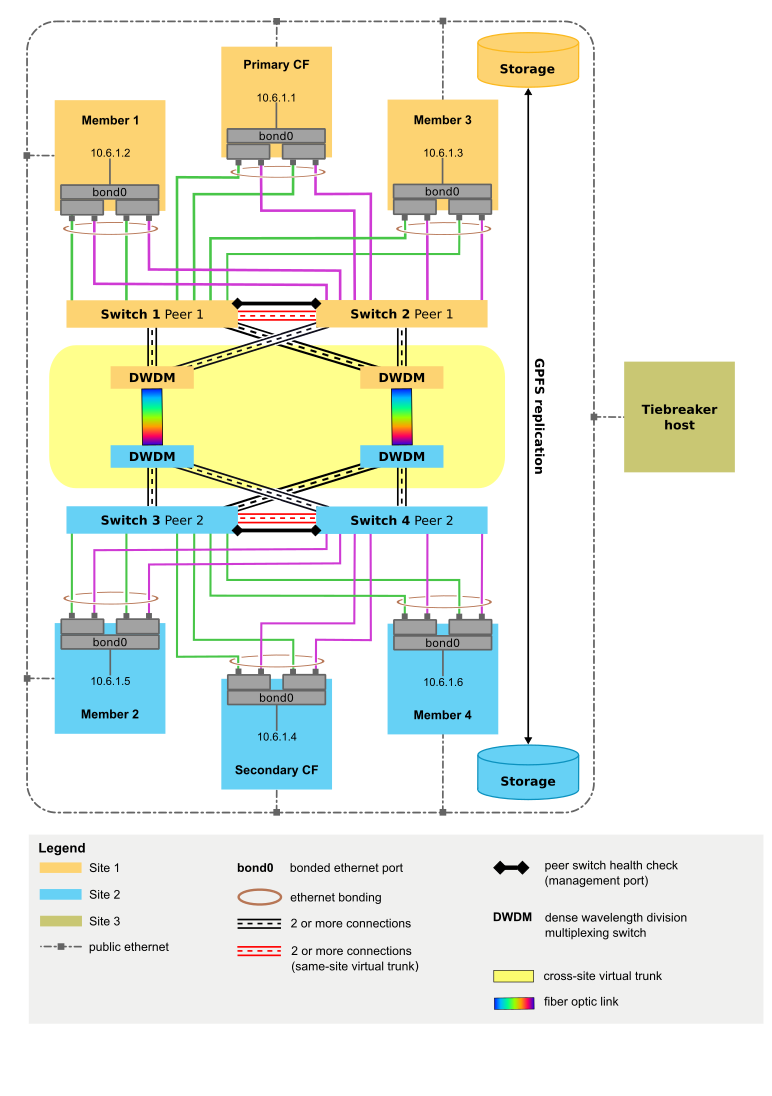 Note: This is applicable for GDPC on RoCE and TCP/IP networks where two switches per production site is supported and recommended.

A similar concept is applied to a GDPC with dual switches in each of the two main production sites. In order to provide the same redundancy and additional bandwidth, every switch must be connected to every other switches with multiple physical links in between each pair. The goal is to configure the two switches within the same site to behave a single logical switch. This, in additional to setting up all cross-site links as one logical link, creates a loop-free topology comparable with a single site Db2 pureScale cluster with two switches.

Forming the logical switch in each site and getting the two logical switches to treat each other as a single entity require more than just LACP. Additional protocols and configurations are required on the switch. Some of the mandatory protocols are IEEE standards available on most switch models. Some are proprietary features available only on certain enterprise level switch models and the name of these features vary depending on the vendors. As a result, not all switch models are suitable for four-switch GDPC deployment. Use the following list which describes all mandatory switch features at a high level as a guideline and consult the user manual of the target switch to determine if it is suitable or not.

The connection between sites is a key piece of infrastructure in a geographically dispersed Db2 pureScale cluster (GDPC). A Db2 pureScale environment exchanges many messages between members and cluster facilities (CFs). In a GDPC configuration, many such messages traverse the link from one site to the other.

These long range transmission component add only a very small amount of extra latency to the message protocol. The bulk of the extra site-to-site message latency, when compared to a single-site Db2 pureScale cluster, arises from the simple fact of distance: each kilometer of transmission in glass fiber adds an additional 5 microseconds of delay. So for example, a 10km distance between sites would add (10km x 5 microseconds/km) x 2 for round trip = 100 microseconds of extra latency for most types of messages. In practical terms, workloads that have higher ratios of read activity compared to write activity tend to trigger fewer message exchanges with the CF, and so would be less impacted by additional site-to-site latency.

In a non-GDPC environment, operational quorum is typically achieved through the use of a tiebreaker disk. In the event of having only half the computer systems in a cluster online (or a network partition where each half is simultaneously online with no network connectivity to the other half), the disk “tiebreaker” device can be acquired by one half of the cluster. This allows it to achieve operational quorum and run software services (that is, the Db2 pureScale instance) on that winning half of the cluster. In the event of a network partition, the “losing” half would consequently be fenced from the cluster, preventing it from accessing any data on the cluster file systems. The requirement for a disk tiebreaker, however, is that the single tiebreaker disk must be accessible from each computer system in the cluster. In a GDPC environment, this disk must be physically located at one of the two sites, which in the event of a complete network partition between the two sites, would prevent the other site from being able to achieve operational quorum. In the case of clusters with an odd number of nodes, a majority of online nodes is needed for operational quorum. However, in the case where the cluster has an even number of nodes, with an even split of online nodes, a tiebreaker disk decides which subcluster gains operational quorum. In cases where one half of the cluster is down, the online subcluster claims the tiebreaker and gain quorum.

GDPC environments rely on strict majority quorum semantics, where one additional tiebreaker host T is required to maintain quorum in the event of site failure. This tiebreaker host T must be the same architecture type as the machines at the two main sites. For example, it must run the same operating system, although it does not require the same hardware model. A best practice is to also be running the same OS level across all computer systems in the cluster. This additional host does not run any Db2 members or CFs.

A two-site configuration where the tiebreaker host is physically located at one of the two main sites would not be able to achieve either operational or configuration quorum in the event of a site failure at the site containing host T. As such, it is a best practice for continuous availability to use a three-site configuration where the tiebreaker host T is physically located at a separate third site (site C), in order to achieve continuous availability in the event of a failure affecting either of the data processing sites (site A or site B), as majority quorum can be established between site C and the surviving data processing site. In three-site configurations, all three sites can be on different IP subnets as long as each computer system from each site is able to “ping” each other computer system in the cluster. Site C also does not require high speed interconnect connectivity; only sites A and B require high speed interconnect connectivity, with a single high speed interconnect subnet spanning both sites.

To aid in problem determination, it is a best practice to have all computer systems at all sites configure their system clocks to the same timezone.

If a network level firewall is setup on each member and CF in the cluster, ensure the relevant ports are opened to allow communications among all pureScale hosts. Refer to Screening router firewalls for TCP/IP ports required by Db2 member and CF processes. Refer to Db2 cluster services port usage information section for TCP/IP ports required by Db2 cluster services.

GDPC requires that both sites A and B have direct access to each others’ disks. To this end, a number of options are available for extending a SAN across the data centers. Options include transmitting Fibre Channel (FC) traffic directly over ATM or IP networks, or using iSCSI to transmit SCSI commands over IP. Dark fiber is likely to be the fastest but also the most expensive option.

GDPC configuration leverages IBM Spectrum Scale replication, by configuring each site to maintain an entire copy of the file system data in its own failure group. As long as quorum is maintained in the cluster, in the event of a site failure (one of the failure groups are lost or inaccessible), the other site can continue with read/write access to the file system.

Tiebreaker host T requires a small disk or partition for each replicated IBM Spectrum Scale file system to be used as a file system quorum disk. The amount of storage for each disk or partition is approximately 50 MB, and these disks or partitions only need to be accessible by host T, and are only used to store filesystem descriptors. I/O activity to disks or partitions that are used to store only filesystem descriptors is very low. Using a full physical volume for this purpose is wasteful and not necessarily practical; configuring a small volume is sufficient for this case. Alternately, logical volumes (LV) can be used as the device type.

The introduction of significant distances between cluster members at different sites increases message latency by an amount of about 5 microseconds per kilometer of glass fiber. In some cases, the amount can be higher, if the connection includes signal repeaters, or is shared with other applications.

Besides distance, the performance overhead experienced by a GDPC configuration also depends on the workloads in use. The greater the portion of write activity (INSERT, UPDATE, DELETE) in the workload, the more messages need to be sent from members to the CFs, and the more disk writes (especially to the transaction logs) need to be made. This increase in disk writes typically leads to higher overhead at a given distance. Conversely, a greater portion of read (SELECT) activity means fewer messages and fewer disk writes, and reduced overhead. As a result, GDPC is best suited for higher read content workload (SELECTs) vs writes (for example 80% or more read activity) with the two sites being 50 kilometers apart or less.

A Db2 pureScale environment is designed to have minimal downtime if a host fails due to hardware or software faults. In the event of a hardware failure, a system must be ‘I/O fenced’ to prevent it from corrupting the data. After a host is I/O fenced, it can no longer access the storage device used by cluster file system in the Db2 pureScale instance, and any I/O attempt is blocked. A key piece of technology to minimize downtime is SCSI-3 Persistent Reserve (PR).

If SCSI-3 PR is not enabled, the IBM Spectrum Scale disk lease expiry mechanism is used to fence failed systems. This typically results in a longer recovery time because of the need to wait for the lease to expire.