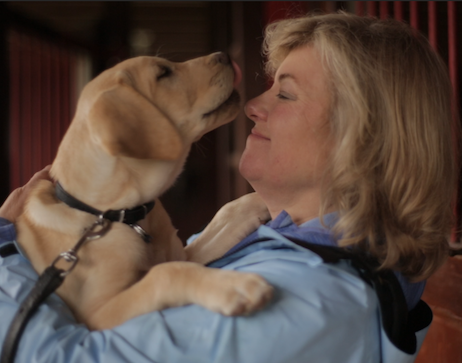 Lorraine together with TJ
—IBM Watson may help
Guiding Eyes determine if
TJ will graduate from guide
dog training.

“I know that by raising a puppy that becomes a guide dog someone will receive a priceless gift that will change their life and the lives of their families,” says Lorraine Trapani, an IBM executive program manager in New York and volunteer with Guiding Eyes for the Blind.

Lorraine has raised puppies for six years—taking temporary ownership of a pup as young as 8 weeks old and getting him or her ready for guide dog training in about a year.

In early 2017, Lorraine started working with TJ, a Labrador retriever named after IBM’s founder, Thomas J. Watson—a distinction that may become a badge of honor when Guiding Eyes uses IBM Watson cognitive computing to match TJ with a person needing a guide dog.

In addition to raising puppies for Guiding Eyes, Lorraine played an important role in introducing the organization to IBM Watson analytics, which they are using to predict with high accuracy which guide dogs can successfully graduate from the organization’s training program.

“As a puppy raiser, I'm laying the foundation for formal guide dog training,” Lorraine says. “I'm responsible for providing a nurturing, loving home environment in which the puppy and I work on relationship skills, dog skills, and house manners.”

But before issuing the first “sit” or “stay” command, raisers attend Guiding Eyes’ puppy pre-placement class that covers the basics of puppy raising and the organization’s training methods and philosophy.

“Guiding Eyes gets to know you through the classes and carefully chooses the right puppy for you based on puppy temperament tests,” says Lorraine.

IBM Watson will help Guiding Eyes use those tests, in conjunction with Internet of Things technology that is in development, to decide on the right environment and kind of raiser that will best position a puppy for success.

And that brings another aspect of being a puppy raiser: data collection.

Every three months, a raiser rates the pup's health, energy level, house manners, confidence in a variety of situations, comfort with grooming and other body handling, and obedience.

Guiding Eyes has been impressed with IBM Watson’s capability to analyze the unstructured data in the evaluations’ write-in comments.

“Quickly finding themes, trends, or tendencies in hundreds of written comments is challenging for a person,” says Lorraine. “Guiding Eyes says this is where Watson blew their minds—being able to provide meaningful insight from the variety and number of comments.”

Every tear is worth it

Lorraine’s interest in volunteering to raise potential guide dogs started when her husband lost half his vision in each eye in a surgery that diagnosed pancreatic cancer.

“I knew first-hand how challenging even a partial loss of vision was,” she says. “I recognized this as an opportunity to make a difference in a personally meaningful way.”

Raisers return their dogs to Guiding Eyes when the puppy is between 15 and 18 months old to hopefully begin their training as guide dogs.

“It's very hard to part with the puppy,” Lorraine says. “Raising them is based on building a strong bond so that they want to work for you, and when you return them to Guiding Eyes it's a bond you break in order for them to bond with their trainer.”

Lorraine describes the separation as similar to sending your child to college—a sad event, but one you know will propel them to what they were born to do.

“The day you see your puppy graduate as a guide dog with his recipient makes every tear worth it.”

The first puppy she raised, Merrick, is now partnered with Carl, the ADA coordinator for the state of Massachusetts; Lorraine got to visit them in late September.

“Watching Merrick guide Carl through the halls of the Massachusetts State House was magical. They moved with such confidence, fluidity, and grace; Merrick is a majestic, serious guide dog—it was very emotional,” she recalls.

“The moment Carl removed Merrick's harness and released him with a soft, ‘Go say Hi,’ Merrick flew at me, covering my face and neck with kisses, beating my legs with his madly wagging tail.”

On the verge of a breakthrough?

Raising, training and graduating a dog to be a guide is expensive and not guaranteed.

As Lorraine wrote in a blog post, it costs Guiding Eyes for the Blind about $50,000 per dog for training over two years, and the success rate of becoming a guide dog is about 37 percent. is less than 50 percent.

However, IBM Watson is changing the equation and improving the odds.

“Guiding Eyes has decades of expertise creating the best environment for breeding, training and graduating guide dogs,” says Lorraine. “Now with Watson joining them, some believe they could be on the verge of a breakthrough in the field.”

TJ, Lorraine’s current puppy, is nine months old, bold, incredibly smart and very confident; he is expected to go into guide dog training in the spring of 2018.

When the time comes for TJ to leave Lorraine and start training, his likelihood for success and possible matching with a recipient may momentarily reside in the cloud—along with thousands of medical records, dog temperaments, genetic data, and personality traits—for IBM Watson to analyze.

While Lorraine knows from her volunteer experience how guide dogs are life changing to their recipients, IBM Watson will know—perhaps with as much as 100 percent accuracy—whether TJ will be one of those very special animals.

“It gives me such an incredible feeling of pride in our company that we are part of helping Guiding Eyes in a very real way, and that through my volunteering I have the opportunity to witness it firsthand.”

Watch a video of how Lorraine, TJ and IBM Watson are helping Guiding Eyes for the Blind.
In a second video, get a dog’s eye view of the process of going from pup to guide with the help of raisers, trainers, veterinarians and Watson.