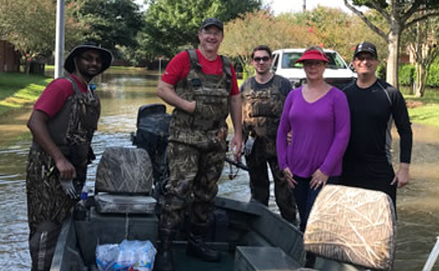 IBM volunteers
come to the aid
of others in
moments of crisis,
as they did
recently during
Hurricane Harvey
in the US.

Many IBM employees and retirees are contributing their time, skills and resources to help others during catastrophic events around the world. The value is immense, yet the ability to acknowledge everyone is inadequate— unnamed and unheralded IBM volunteers are assisting in another crisis even at the moment this story is being published.

The story below is about the actions of some—not all—IBM volunteers during Hurricane Harvey as collected by Will Simonds, an IBM senior digital content strategist, and Sheila Appel, US regional director for IBM corporate citizenship and corporate affairs.

Many other IBM volunteers not named in this story are actively helping to improve the situation in Texas, and other parts of the world impacted by natural disasters. Their efforts and contributions are equally worthy of the highest praise and thanks, though their names may be missing from this story.

If you want to tell us about a volunteer or how you are helping, please submit your volunteer story on the IBM On Demand Community (internal use only; access to the IBM intranet is required).

Look for more stories about IBM volunteerism during crises in the coming weeks.

What IBM volunteers do in times of crisis demonstrates why the company can be essential in communities around the world; their actions come from a place reflective of IBM values and practices.

The response by IBM volunteers after the earthquake in Japan, flooding in Chennai and Hurricane Sandy in the US, are only a few examples of employees and retirees who rise to the needs of colleagues, clients and communities when the situation is dire.

IBM volunteers in Texas, throughout Hurricane Harvey and its aftermath, are no exception and exemplify dedication, innovation and trust.

Once again, individual IBMers have proven this to be true by making significant contributions and rallying to support the city of Houston. Here are just a few of their stories related to the practices that IBMers live in their professional and personal lives.

An IBM practice: listen for need, envision the future

Charlie Compton, an IBM system sales specialist from Dallas, Texas, bought a boat with his own money and immediately drove to Houston right after the storm. While

Kendra Garroutte, a software sales solution representative for IBM in Houston, together with her husband LaMarcus, also brought their boat to those in need of help.

Both boat captains, Charlie and LaMarcus, made numerous trips in and out of the area without regard to the risk associated with the effort. Another IBM volunteer, an IBM client unit executive, help coordinate relief efforts, ensuring boats arrived in the locations needed.

“You exhibited the spirit of an IBMer that touched many many lives,” said Nick Joseph, an IBM client executive in Houston, who also volunteered to help others. “Thanks to your generosity of time and resources, people are starting the process of rebuilding.”

A large group of IBM volunteers and their friends came to the aid of one of their colleagues in Houston. Rico Rosenbaum, Larry Williams, Nick Joseph, Ram Subramanian, Allan Sommers, Ramsey Randolph and his cousin Eric, Santosh Mulayath and Ashutosh Ashish volunteered to help Zahid Habib save what items they could from his home, knowing about the dangers in the water.

“We may have lost our home, but this team gave us back our memories,” said Mr. Habib, an IBM vice president and global industry leader.

Jamaal Crawford, an IBM network support engineer in Houston, received a notice from a co-worker that that the Houston Independent School District needed people to go to different schools and check the electronics that mainly connected to the network.

He explained to his son what volunteering means and why they were doing it.

They were assigned to De Zavala Elementary school. “My son's job was to turn on all the computers and monitors after I plugged them in,” Jamaal said.

“Then once I logged in, he had to make sure that they could reach the internet. It was a great feeling to be able to help out as much as I could and have my son right there with me helping also. I plan on volunteering more as time permits. “

Dr. Stan Latta, an IBMer from Durham, North Carolina, has been a community volunteer for over 35 years.

As an American Red Cross certified disaster instructor, Stan teaches a special course in deployment/shelter Just-In-Time training to credentialed volunteers who will be heading to Hurricane Harvey. His doctoral dissertation, Strengthening the Corporation-Serving the Community, confirms the value of volunteerism to individuals, the community and to supportive companies that allow or encourage their employees to be active in community service.

Brian Haskett, an IBM vice president and delivery leader in Houston, volunteered through his church helping those who were flooded in the suburbs of Spring and Cypress.

“Although the disaster and its implications were devastating, it was very encouraging to see the entire community rally all across Southeast Texas” said Brian. “Whether preparing lunch for work crews, or handling the logistics of supplies, or performing the back-breaking effort of mucking a flooded home, just about everyone could find a way to help.”

Brian’s experience inspired him to blog on Leadership Lessons from Hurricane Harvey.

John Harris, an IBM mechanical design engineer lives in a Houston neighborhood that flooded during the storm. John was surrounded by IBM volunteers helping others.

“My house was flooded along with Brian Shoemaker's and former IBMer Adam Chunn's. Woody Hutsell lives just across the street from Adam, and very narrowly avoided being flooded by literally a couple inches.”

“These people have offered more help, as have every other IBMer I've talked to,” he said. “I'm sure there'll be more help in the coming months as we rebuild, but this group should at least be recognized for their efforts thus far.”

Since John’s car was flooded in his garage, Jake Miller, formerly an account customer engineer for IBM, drove him to work, and is staying with his parents. “Jake’s also offered to let me borrow his truck next week,” said John.

Brian Shoemaker briefly went to a shelter and then was taken in by Ken Scianna, an IBM software programmer, who opened his home to others and offered to host people who work on the north side of Buffalo Bayou since many of the north/south roads remained blocked and congested.

Joe Wanja, an IBM developer, and John Harris had originally planned to take time off on September 7 and 8, but the storm changed their plans.

Joe and his wife invited John to stay with them for the days of their break, even letting John borrow his car to meet a Federal Emergency Management Agency inspector—giving John a ride across town in rough traffic when it was time to go home. “The break from the limited demo work I could do and waiting on the waters to recede was great, and we still got to have the fun we were looking forward to despite the storm.”

Kim Querner, director of offering management for IBM in Houston, wasn’t personally affected by the storm damage, but she and her family jumped in to help others.

Kim and her husband fed first responders and those having to spend their days out in the weather.

“My husband smoked over 25 pounds of brisket, 50 pounds of chicken, 20 pounds of sausage and some boudin that we served at police stations and central command locations for both the day and night shifts,” said Kim.

“We learned quickly the night shifts rarely get hot food. We made it a family affair with our eight year old with some of her friends helping to serve the food, and our two year old handing out the canned drinks and chips.”

Also as a family event, they drove around neighborhoods handing out cleaning supplies and masks from the back of our suburban. “So many of the staple cleaning items and protective masks were difficult to find in the Katy area, we drove to San Antonio and loaded them up,” she said.

An IBM practice: service to the community (including pets)

The Weather Company provided critical weather data and analysis, gathered information for IBMers and citizens, and even helped lost pets find their way back home.

Continued flooding and evacuation orders from Harvey left pets stranded and in peril. The Weather Channel’s new Pet Finder integration, powered by PawBoost, helps connect lost and stranded pets with their owners. Users who have lost a pet, or rescued an animal, can submit details via the form on weather.com to help reunite owners and their furry friends. PawBoost then uses their social channels to get lost & found pet alerts in front of the local pet lovers who want to help.

Jennifer Blair, a cloud and cognitive industry solutions leader for IBM in Houston, coordinated many of the efforts to secure pets and volunteered at a shelter for displaced animals.

An IBM practice: unite to get it done

Many IBM teams and individuals contributed to relief efforts around Hurricane Harvey.

They worked, and continue to work, to coordinate across brands and functions—dropping their day-to-day tasks to ensure IBMers and IBM property and assets are safe, and client needs are met.

In thanking one volunteer, the words of Nick Joseph, the IBM client executive in Houston, can be applied to all volunteers—named and unnamed—in this situation and others that may come: “… your immediate actions in the moment of dire need will never be forgotten.”

We apologize that we do not know the names of all volunteers during these evolving situations. The list of IBM volunteers helping during Hurricane Harvey is long and expanding, and their stories are compelling. At this time, below are the names of additional IBM volunteers who are helping others in their communities:

If you want to tell us about a volunteer or how you are helping, please submit your volunteer story on the IBM On Demand Community (internal use only; access to the IBM intranet is required).