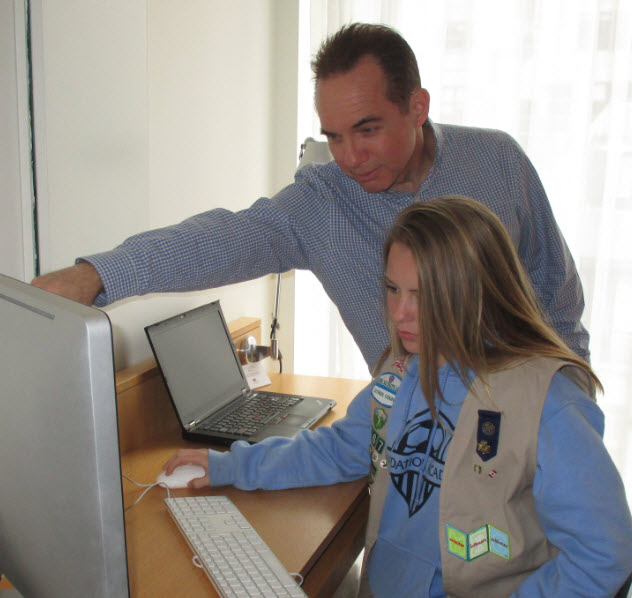 “I want these girls to
pursue careers in STEM
because I know that
they can do anything they
put their minds to,”
says John Quillinan.

In 2016, the IBM On Demand Community (ODC) shared the story of Florida-based John Quillinan, a senior managing consultant in cognitive computing for IBM, who is a volunteer with the Girl Scouts of Citrus Council (GSCC).

John has grown a single science, technology, engineering and math (STEM) event for GSCC into an annual coding event for girls and achievement toward a STEM-related activity patch.

The strength of their relationship led to GSCC playing a role in launching a new anti-bullying and diversity program.

Earlier in 2017, John received an IBM Volunteer Excellence Award for his volunteerism. ODC caught up with him to understand more about what he has been up to.

On Demand Community (ODC): John, what does winning an IBM Volunteer Excellence Award mean to you?

John Quillinan: My goal is to create a national computer programming/coding program to be endorsed by Girl Scouts of America. I’d like to encourage interest in the program by making program participants eligible for internships at IBM. I hope this award will expose my efforts and make these goals a reality.

Of course, it was a great honor to be nominated my local CCCA manager and an even greater honor to be selected.

ODC: You've been involved with Girl Scouts of Citrus Council (GSCC) for several years, helping them develop science, technology, engineering, and math-related activities, including the "Dive into STEM" event. How has overall program changed since 2013?

John: I had wanted to repeat our first event, "Dive into STEM,” but ran into challenges that had us slightly change course. I decided to focus on using more IBM assets and in 2015 organized our first Bluemix coding event using the IBM activity kit called Kids Code!; I also used the same activity at my daughter's middle school. Then I organized another Bluemix coding activity at the beginning of 2017 with GSCC, and proposed that we keep having these events and incorporate cognitive computing and Watson.

In April, I was on an IBM Corporate Service Corps assignment in Morocco and updated the Kids Code! activity to leverage Github and the Cloud Foundry pipeline on Bluemix. I also incorporated a Watson Conversation Service activity, and organized an event with the assistance of Sidi Ali Maelainin, the IBM corporate citizenship manager in Morocco. The updated program was delivered to over 17 Moroccan high school girls.

When I got back to the US, I contacted GSCC and with the help of Janell Ray, my CCCA manager, we secured additional funding to start a coding program and a coding club in the fall.

ODC: As an IBM consultant for analytics and cognitive, what do you think the GSCC activity will look like when cognitive computing and Watson become part of it?

John: I’ve been working on incorporating cognitive computing and Watson into the GSCC coding program. In March, I prototyped a simple chatbot for GSCC, and I added content about our Watson Conversation Service to the coding activities. My plan is to teach the girls about Watson Conversation, and get them to work on a project using it to create applications that they can personally use, or in conjunction with Girl Scout activities such as cookie sales, or helping GSCC.

My vision is to teach them about other Watson Developer Cloud services and the analytics services available on Bluemix, and challenge them to build cognitive applications. It would be terrific to have GSCC girls compete in contests such as the ACM International Collegiate Programming Contest. The University of Central Florida holds an annual High School Programming Tournament, and I think it could be our goal for the first year.

ODC: Have other IBM volunteers joined you along the way to help out?

John: The volunteers that come out to help are really important. Having co-facilitators is important to create a signature experience for the participants. Also, the volunteers portray role models for the girls, and can share personal stories about their career and of their successes, and how they ended up working for a cognitive and cloud computing company.

My first volunteer, JoAnn Post, has retired from IBM, but was on several planning calls for the "Dive to STEM" event, and helped the day of the event.

There are a few local IBMers in Orlando who always come out. Robin Hernandez is one of the go-to volunteers, and comes to all of the coding events, along with several others. I can always count on Janell Ray, my CCCA manager, to attend the events and/or bring some IBM freebies.

ODC: Your work with GSCC resulted in several IBM grants for the organization, and has allowed the relationship to deepen into other areas. Tell us about the relationship and the “Teaching Respect” program.

John: Since 2012, I’ve helped GSCC receive $22,000 in IBM grants, which does not include the IBM Impact Grant I persuaded them to apply for last year.

In order to build a relationship, you have to become a thorn in their side. It sounds harsh, but I mean that in a positive way. Non-profits have priorities that are a mile wide, but resources that are razor thin. Keeping them focused on what IBM or I feel should be a priority is a challenge. Among other things, GSCC has the annual cookie sale and the management of several camps—both are big deals, so I have to constantly reach out to them, sending emails and scheduling a call to get them interested in follow on coding events.

In addition to the Community Grants, which are having an impact on GSCC’s plan to create a mobile STEM unit, I’ve been relentless in offering to facilitate programs for them. I’ll admit it can sometimes be frustrating, but I don't give up, even after I have organized some event and leave feeling completely exhausted at the end. Yet, my philosophy is that hopefully I reached at least one girl and that I will just have to do it over again to reach another.

I want these girls to pursue careers in STEM, because I know that they can do anything they put their minds to. Because I have maintained that relationship, suggesting things like the IBM Impact Grant, and obtaining Community Grants, while organizing events for them, it was not difficult or awkward for me to go to GSCC and solicit their support in kicking off the Teaching Respect program, which was also the right program for GSCC too. Youth should learn to respect others, and accept each other’s differences early on.

Last September, Emily Santos, an IBM CCCA manager, came to me and indicated that IBM wanted to do something in memory of the victims of the Pulse nightclub shooting, while teaching the importance of diversity and acceptance. I organized several calls between IBM and GSCC leadership so that we could introduce the idea, and I kept following up with GSCC to secure a venue, guest speaker, and create buzz as an official Girl Scout activity that the girls could sign up for. In addition, I used my network with Citrus Council to identify the person responsible for creating badges, and she worked with our creative folks on designing the “Teaching Respect” activity badge.

ODC: What's next for you as a volunteer? What are you looking forward to?

John: Professionally, I’ve always had a passion for community service, and an opportunity within IBM Corporate Citizenship and Corporate Affairs would be welcomed. It is my passion and I think I would be good at it.

As a volunteer, I’m looking forward to more Bluemix coding events, teaching the girls about cognitive computing and building chatbots.

Last, I want to add for those who might think they have nothing to offer an organization, think again! Your mere presence has an impact on the organization, those that it serves, and those around you; I’m confident your contributions are appreciated by someone whether or not you are told.

John Quillinan is among 14 other IBM teams and individuals who are recipients of the twelfth annual IBM Volunteer Excellence Award. The award is recognition from IBM Chairman and CEO Ginni Rometty, and is the highest form of global volunteer recognition given by the company to employees.