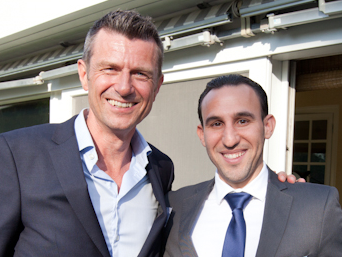 “The refugees in Denmark are no different than any other refugees with broken lives, broken dreams and broken families in a new territory where they have to start a new life,” says Sanne Urbak, the Corporate Social Responsibility Leader for IBM in Denmark.

The upheaval for refugees can be traumatic and it is also a complex challenge for those in the societies where refugees are trying to settle. In Denmark, as in other countries, compassion bumps against practicality in how best to accept new citizens—support exists on a spectrum from low to high.

“The public and political debate in Denmark often focuses on refugees being a burden,” says Sanne. “Seldom talked about are the talents, abilities and resources that some refugees possess that could potentially be valuable to Denmark.”

It may have been the sense of inclusion that IBM and its employees embody combined with the Danish cultural heritage of social volunteering that motivated over 75 IBM employees to volunteer for the 25 positions to mentor refugees.

The team of IBM volunteers was recognized with a 2016 Volunteer Excellence Award for their work with the organization Foreningen Nydansker (“New Dane”) and its Business Mentor Program for Refugees.

Fast response to a call for action

The summer of 2015 saw many refugees from Syria, Eritrea, and other countries arrive in Denmark. Numerous IBMers were touched by their stories and asked Sanne if there was a way to support them through IBM.

“Our strategy is to contribute with our specific strengths and skills—the idea of a mentoring program where IBM volunteers could offer support for refugees to integrate into the Danish labor market and society was obvious,” says Sanne.

The IBM volunteer team would have expertise in technology, project management, process, and other business matters, but not necessarily in the specific challenges of refugee support.

To assist with that part of the program, Sanne contacted Foreningen Nydansker (“New Dane”) a nonprofit organization specializing in integration and diversity issues in Denmark.

The timing was good as Foreningen Nydansker was in the process of developing a mentor program with another large Danish company, Novo Nordisk. It happened to also be a perfect fit with IBM, and in the fall of 2015, the partnership was established for the Business Mentor Program for Refugees. Foreningen Nydansker would prepare the IBM volunteers, match them with a mentee and provide ongoing support

Now with the structure of the program defined, the IBM Country General Manager for Denmark, sent an email to employees asking for their assistance, stating why this initiative was important for IBM, its people and the communities where they live.

“Only 24 hours after we asked IBM volunteers to apply for the program, more than 75 had sent their applications—and we only needed 25 volunteers,” says Sanne.

The 25 IBM volunteers each had more than five years of IBM business experience, prior mentoring engagements, demonstrated leadership skills, and specific professional expertise—the “dream team” of volunteers for the project.

Several times a month, IBM volunteers would meet with their mentees at the IBM location in Copenhagen and Aarhus for one-on-one mentoring sessions—covering specific topics to help the new citizens establish and grow their business credentials in their adopted homeland.

“I was told by one of the refugees that his mentor was like a lighthouse—providing light and direction—and that he could not imagine where she would have been without the IBM mentor,” says Sanne. “The IBM volunteers were vital to the success of the project. It makes me very proud to work at a company that makes this possible—whose people can add to a very important agenda in Denmark.”

Of the 25 refugees who participated in the project, eight are now in fulltime jobs, four are continuing their studies, four started internships, one was accepted as an apprentice and another is an entrepreneur.

So motivating was the experience that Henrik Froekjaer-Jensen—the IBM executive ambassador of the program—and his family are now taking care of some refugee children who arrive with no parents or relatives, and helping them through the Danish Red Cross.

The press coverage of the overall program with Foreningen Nydansker has been extensive across television, radio and newspapers, and included support and participation by other companies, the United States Chamber of Commerce, and the American Embassy in Denmark.

Sanne and others, including the IBM Denmark Country General Manger and some of the mentees from the program, have spoken at conferences and workshops to discuss the approach as a concrete solution to integration.

In fact, the program started again earlier in 2017. “We have a new group of 20 IBM volunteers and 20 refugees,” says Sanne. “We are focusing on highly skilled refugees, and this time, with an additional concentration on women and technology.”

“My wish is that they all become happy, settled and are able to form a new life and future that includes a job for self-sufficiency. I know from the refugees how important it is for them to become valuable contributors to Danish society,” she says.

“And for each wonderful IBM volunteer, I believe they may consider it part of their citizen obligation to make our country and world even better with these new citizens. It’s an honor for me to facilitate these programs on behalf of IBM and our employees here in Denmark.”

The IBM volunteers from Denmark are among 14 other IBM teams and individuals who are recipients of the twelfth annual IBM Volunteer Excellence Award. The award is recognition from IBM Chairman and CEO Ginni Rometty, and is the highest form of global volunteer recognition given by the company to employees.