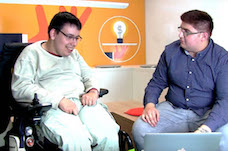 Inequality exists around the world, and the reasons for it can be both complex and simple. Regardless of its origins, the fact is that some people— including our neighbors, our acquaintances, our seatmates on the bus—are treated so differently that their lives are a daily struggle compared to others in the same society.

“I think it is not a secret that Romanis are an excluded minority and community here in Brno and in the Czech Republic,” says Vendula Krejcirova, an IBM practice lead and volunteer with the organization IQ Roma Servis.

Vendula, and three of her IBM colleagues— Filip Cwierz, Eva Stepankova, and Tomas Zurek—are all mentors to students in a youth program from IQ Roma, an organization whose mission is to support possibilities, opportunities and determination for Roma, and all are who are excluded, on their path to growth and “social use.”

“IQ Roma has a broad set of the services ranging from work with families to children to students and adults,” says Filip, an engagement coordinator for IBM in Brno. “They are focused on education, social work and the job market. The Gendalos program, where mentor students, is in fact a unique gem; there is probably nothing else like it, and I hope we can facilitate creating something similar in other different cities.”

In 2017, the four IBM volunteers received an IBM Volunteer Excellence Award for their work with IQ Roma and the Gendalos program.

A better path than before

The Roma, or Romani (sometimes spelled Romany), immigrated to Europe from India hundreds of years ago, and to the Western Hemisphere in the late 19th century, where several countries at the time, including the United States, forbid their entry simply based on racial grounds.

A 2013 New York Times article pointed to the decades of discrimination and complex social issues for why Romani are often linked to poverty, accused of high crime rates and behavior that some consider to be antisocial.

“Romani students have very limited options for studies because usually they are placed in one school or class where there are only other Romani pupils,” says Vendula.

The segregation often leads to poor quality education, minimal understanding or experience with broad society, and a reduced likelihood of going to secondary school.

At IQ Roma, the four IBM volunteers were each matched with a student who satisfied several requirements to earn mentoring.

“I worked with a young man named Samuel, and the goal was to help with his transition from elementary school to the high school,” says Filip. “We focused on his ability to manage school duties, and since mentoring is based on a relationship, we also talked about personal things.”

Filip mentored Samuel for about a year and a half, sometimes as frequently as once a week, and they were always in touch by phone or social media. Yet Samuel ended up leaving school.

“I really understand why he needed to leave school; it was an unfortunate decision due to family problems. He said he would keep school on his list, but he needed to sustain himself, his mother and his little sister, so he got a job,” says Filp. “It wasn’t our objective, but Sam did tell me that the things we worked on together did help him in this.”

Vendula’s experience also didn’t go where she might have expected. For nearly two years she mentored a young woman in high school named Tyna, helping her prepare for the exams that could lead to getting into a university.

“We mostly studied. We would meet at her dorm and go over her homework from math, English, Czech, whatever she needed,” says Vendula. “But Tyna loved to talk. So she talked about lots of things, including school, and asked my opinion.”

Together, Vendula and Tyna chose the university where the high school student applied and Vendula helped her prepare for the entrance exams. In the end, Vendula simply says, “Unfortunately, the exams did not go well.”

But she also says that the typical measures of success in mentoring may not be appropriate for their situations since progress in the relationship itself is also vital.

“The success should be measured based on the level of mutual trust and cooperation,” she says. “Tyna had trouble with the national exams and did not get to university, but I do not think for a second that we failed. I know how she changed, how she grew up, how she changed her interests and that she really tried to change her way of learning. We succeeded because her path is better now.”

The two other award winning IBM volunteers, Tomas and Eva, are in the midst of learning what the immediate future holds for their mentees from IQ Roma.

Tomas has been helping his student earn an IT certification, which they think will be achieved in the next few months.

Eva has been with her mentee, Marie, for two and a half years working towards graduating from high school and going to university.

“In the beginning we were meeting mainly to help her with her studies,” says Eva, “but she has improved a lot, and now we also meet like friends and discuss normal life problems. We really understand each other.”

Eva is optimistic about Maria’s next step. “She has her exams at the end of May, and she is doing really very well. She studies very hard and I’m proud of her.”

While not all stories will have perfect endings, these IBM volunteers are doing the best they can to provide new opportunities—whether now or in the future.

“We all are goal oriented at IBM, usually going for short and medium term goals,” says Filip, “but mentoring is a long time investment with uncertain results—maybe you’ll never see the results, but this is in fact the goal, to create a long lasting effect.”

Filip Cwierz, Vendula Krejcirova, Eva Stepankova, and Tomas Zurek from IBM Czech Republic are among 14 other IBM teams and individuals who are recipients of the twelfth annual IBM Volunteer Excellence Award. The award is recognition from IBM Chairman and CEO Ginni Rometty, and is the highest form of global volunteer recognition given by the company to employees.