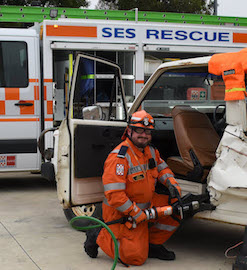 Mark Reschke with the Holmatro
hydraulic equipment (i.e. the
“jaws of life”). A rescue truck in the
background was partially equipped
thanks to an IBM Community Grant.

The first things people want to know about Mark Reschke’s volunteer work with the Gisborne unit of Victoria’s State Emergency Service (SES), in Australia, is whether the activity is extremely demanding and if it requires special skills.

Mark, an engagement solution manager in IBM’s new business area, reassures them that SES members vary widely in age and ability, and that everyone has an important role to play. The most important trait is having an interest in helping others.

The SES unit in Gisborne, about an hour northwest of Melbourne, mainly responds to storm, flood and road rescue operations, Mark says, such as repairing homes and businesses damaged by storms from strong winds or falling trees. He works with a team that clears fallen trees, sandbag homes, businesses and community infrastructures during flood events, and they act as first responders to road accidents.

“We also participate in search and rescue operations and support other agencies, such the Victoria Police, Ambulance Victoria, and the Victoria Country Fire Authority,” he says.

Mark’s work experience has been helpful in his role as a volunteer. At IBM he works with “deal teams” to provide cost-effective and appropriate solutions for new clients using a combination of standard IBM offerings such as cloud, cognitive, security, and mobile, and customized services.

“I’ve worked in customer-facing roles where I often need to respond to a problem, diagnose the issue, and then find a solution to address a customer’s immediate needs and resolve long-term issues,” Mark says. “That’s training that has proven invaluable in my volunteering with the Victoria SES.”

Inherent to the SES unit’s work is a responsibility to help people in some state of crisis and make the environment safer for the greater community. That kind of work demands an ability to collaborate, plan, listen, and be responsive, all skills Mark develops at his job. “I've recently taken a more active role in the IT support for the Gisborne SES unit,” Mark says, “which has given me renewed customer perspective.”

One of the main benefits Mark received from volunteering with the SES was wide range of training. “No one is expected to have all of the skills and capabilities needed to be a volunteer, and the encouragement to grow and develop new skills is exceptional,” Mark says. For Mark, that training has benefited both his volunteer work and his career at IBM.

Mark has used the Disaster Volunteering activity kit in his time with SES and found it useful. “I've shared some of the materials with the unit management team and received positive feedback,” he says.

One of the most important things Mark has gained from volunteering is the commitment he and other volunteers share in helping others. Having the skills to help others in an emergency is important, he says, because you’re “not just being a willing bystander, but you’re someone who has the training and knowledge to help those in need.”

Mark hopes the effort that the SES unit puts into volunteering helps to make the Gisborne community a better, more connected place to live. “The work is immensely rewarding,” he says.

“I look forward to volunteering for many years to come.”