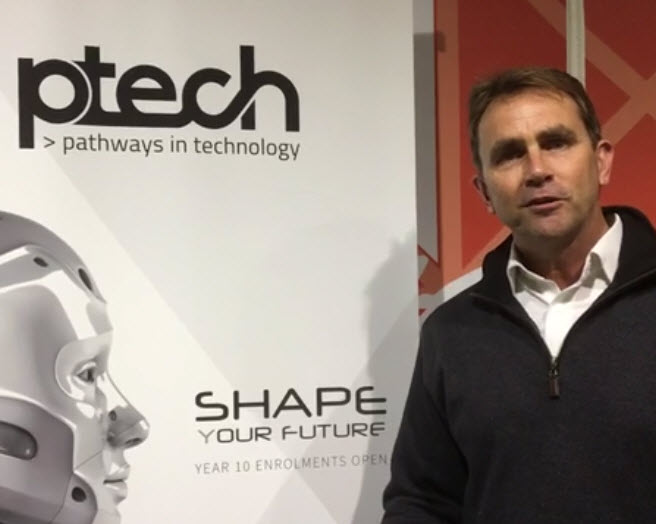 Steve Davies and other
IBM volunteers have
successfully brought
the innovative P-TECH
education program
to schools in Australia.

Many agree it may be time for the four-year college degree to go back to school as the nature of work changes to more technology-related jobs which don’t require university credentials—what IBM Chairman and CEO Ginni Rometty calls “new collar” jobs.

Business leaders anticipate a skills gap that may not be closed by those with traditional four-year college degrees, as new collar professions such as database administrator, cybersecurity analyst or pharmacy technician require vocational proficiency but not necessarily university degrees.

IBM volunteer Steve Davies, who leads the IBM Client Innovation Centre in Ballarat, Australia, has devoted the last three years to adapting an innovative six-year education program that started in the US and making it a success Down Under.

Steve received a 2016 IBM Volunteer Excellence award for his efforts to bring Pathways in Technology Early College High School (P-TECH) to students and communities in Australia.

P-TECH schools combine high school with a clear pathway to a community college or associate degree, coupling strong academic rigor with workplace skills. Within six years or less, students can earn both their high school and two-year college degrees in a science, technology, engineering or math field.

“I first heard of P-TECH three years ago,” says Steve. “When I learned it was about providing opportunity to youth who might otherwise be disengaged from education I could not help but get involved.”

In the US, P-TECH started in 2011 as a public-private partnership between IBM, the New York City Department of Education, and the City University of New York.

Similarly in Australia, Steve and the IBM Corporate Citizenship team helped forge alliances with federal, state and local departments of education, and Federation College, a high school delivering the Victorian Curriculum of Applied Learning to students in an area of high youth unemployment.

“The college is owned by Federation University Australia, with whom IBM has had a very strong relationship since 1995,” says Steve. “It made sense that if IBM was to be a partner to a P-TECH here in Australia that a high school located near our facilities in Ballarat be selected.”

The first P-TECH in Australia was established in Ballarat, a regional city of just over 100,000 people in the process of transitioning from a largely manufacturing base to more specialist high tech industries.

As in the US, P-TECH students in Australia can be paired with business mentors, and gain practical experience through workplace visits.

In one such visit to the IBM offices in Ballarat, Steve recalls how the students seeing a row of emergency hardhats produced an impromptu, fun and constructive discussion about occupational and health safety practices in the workplace.

IBM mentors and volunteers have provided P-TECH students with input on possible projects. One of which, literally, took flight.

“Bryan Cameron, one of the IBM mentors, asked if the students could figure out an innovative way deliver the internal IBM mail,” says Steve. “The result was a project for drone delivery. It was a great success as shown in a video and also received very positive local press.”

While Steve has been a determined leader for P-TECH in Australia, he is very quick to point out the contributions made by others.

“Bringing P-TECH to Australia has been a large team effort, including folks from our corporate citizenship team and folks on the ground in Ballarat. It would not be successful without all the other IBMers who volunteer their time as mentors, participate on the operations committee, support industry visits, and run projects.”

Expansion across the country

Changing the face of education is not simple and requires delicacy and diplomacy.

“Due to the sensitivities associated with establishing a new school age program, it was important not to be seen to be taking students from other schools,” he says. “P-TECH was marketed more through word of mouth and engagement with local community support groups targeting students who were perhaps struggling with the traditional high school model.”

Word of mouth is spreading fast, as is additional support for P-TECH from local, state, federal and industry partners.

Eight P-TECHs are now operating across Australia and the federal government has committed to six more in 2018.

“In Geelong, we have support for the P-TECH there from five different industry partners,” Steve says. “I have the pleasure of attending many events with the leaders of our local community in Ballarat. Several have asked how they can become an industry partner. Many have opened their facilities to support workplace visits giving the students a broad insight into the world of work in technology.”

Hoping for results in Australia to mirror those in the US (e.g. graduation rates nine times the average for low-income students), the first students graduate from the program and either transition into new collar jobs here at IBM, or enroll in our local university and complete a full degree in technology.”

He adds, “I believe we all have a responsibility to support our communities through professional giveback. It might sound like a chore, but the personal satisfaction you will receive for doing so will make it all worthwhile.”

Steve Davies is among 14 other IBM teams and individuals who are recipients of the twelfth annual IBM Volunteer Excellence Award. The award is recognition from IBM Chairman and CEO Ginni Rometty, and is the highest form of global volunteer recognition given by the company to employees.