At IBM, diversity is tightly integrated into our business strategy. As we innovate and transform as a company, we are guided by our core corporate values, of which diversity is an essential component. Our leaders strive to continually manage employees in line with our values and beliefs to enable them to develop their full potential. But we don’t stop there — we also endeavor to engage governments, communities and other corporations in our efforts.

In 2014, IBM continued to demonstrate leadership in its support of constituent groups. Below are some examples.

IBM has a long history with LGBT workplace equality. As early as 1984, we included sexual orientation in our nondiscrimination policy. In 1995, an LGBT executive task force was established. Today, that task force is known as the Global LGBT Council and is focused on making IBM a safe and desirable workplace for all people.

In 2014 IBM was named the world's most LGBT-inclusive company by the Workplace Pride Foundation, based in Amsterdam. This announcement was the result of the Foundation's Global Benchmark survey that scored large international employers for their LGBT workplace inclusion policies and practices around the world.

In addition, for the 12th consecutive year, IBM scored 100 percent on the Human Rights Campaign Foundation’s Corporate Equality Index, the national benchmarking tool for corporate policies and practices related to LGBT employees. The index, released each autumn, provides an in-depth analysis and rating of large US employers and their policies and practices pertinent to LGBT employees, such as equal-employment opportunity policies that include sexual orientation and gender identity or expression, employment benefits for all benefits-eligible US employees and ongoing LGBT-specific engagements that extend across the company.

IBM was also named Global Employer of the Year in Stonewall’s Global Equality Index 2014 for the second year in a row. 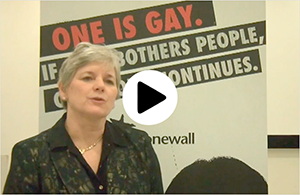 IBM’s Claudia Brind-Woody, vice president and managing director, intellectual property and advanced technology licensing, discusses the work IBM has done over the past year in engaging with LGBT work globally.

More than 23 percent of IBM's global executive population is made up of women. About two-thirds of IBM's women executives across the world are working mothers, demonstrating that IBM women do not have to choose between a career and motherhood.

As part of IBM’s ongoing commitment to advancing women in the workplace, we invest in programs like Building Relationships and Influence for Women, designed for high-potential women leaders with experiential and action-centered learning to help participants develop skills in building, developing and maintaining business relationships and influence. In 2014 we launched a new leadership offering for mid-level women called “Creating Your Leadership Journey.” The content for this course is based on the three themes that emerged from our recent Advancing Women at IBM study:

Our continued focus on building IBM’s technical women leaders prompted Technologistas, a social media campaign that showcases many of IBM’s talented innovators as role models in the industry.

The skills and capabilities of the workforce must keep pace with a constantly evolving world as the competition for talent intensifies. Including people with different abilities in IBM’s workforce is based on sound business judgment and anchored in IBM principles and HR strategy. As employers, we have the responsibility to offer equal employment opportunities to everyone.

IBM’s recruiting teams play an essential role in identifying and interviewing skilled people with different abilities. Through a training module and a recruitment guide, IBM helps recruiters understand how to effectively provide reasonable accommodations when recruiting people with different abilities and to know what support is available within IBM for employing people with disabilities. In 2014, we developed a learning framework for our employees with disabilities to ensure equal access to technical and leadership development opportunities.

IBM is committed to creating a supportive, flexible work environment that provides principles, guidelines and workforce options to help our employees effectively manage their work and family responsibilities. In fact, that understanding is a cornerstone of our employment value proposition; we know that IBMers need time to cultivate personal interests and integrate the demands of the job with the demands of their personal lives. To address both employee and business needs, IBM follows six flexibility principles that can be adapted by each country as needed, based on legislation, local custom and other factors:

Every IBMer is considered a global IBMer. That means each employee must be able to seamlessly collaborate across borders and business units. Leading and working in multicultural teams to solve complex client problems has become the norm as IBMers do business around the world.

Every year IBM sponsors an annual Cultural Adaptability Awareness Week to increase the cultural adaptability of the entire organization — from the most senior executive to recent hires. The focus of the 2014 Cultural Adaptability Awareness Week was to encourage IBMers to explore, educate and share their expertise with others. Even beyond the designated week, IBM shared the programs, activities, resources and individual insights to help each other cultivate deeper cultural knowledge. We asked all employees to join the Global IBMers Community hosted on our internal website and spend time participating in activities to broaden their understanding of cross-cultural collaboration — helping to improve the way we do business across borders. Some highlighted activities during this week were:

As we refine our employment and leadership practices to continuously attract and develop global thought leaders, it is imperative that our diversity strategy enables us to meet the company’s business objectives and talent requirements. IBM’s Business Resource Groups (BRGs) tie directly into our diversity strategy and voluntarily bring together talented groups of diverse IBM professionals with the ultimate goal of enhancing the success of IBM’s business objectives by helping members succeed in the workplace. As part of their charter, BRGs align their programs and initiatives with at least one of four IBM business and talent workstreams: recruitment and hiring, talent development, employee retention and market development.

These groups share their achievements in the BRG Connections Community on IBM’s intranet social platform.