Over at a well-known tennis club in SW19, the mood is celebratory. Not only because this year Wimbledon is back to unrestricted access for fans for the first time since 2019. But June 2022 also marks the centenary of Centre Court in its current location at Church Road. A special exhibition has been curated for the occasion in the Wimbledon Museum, next to the famous court. Among its many fascinating displays from the past century are original outfits – some weighing as much as 5 kilos – and wooden rackets, once used by the first players to compete in the world’s oldest Grand Slam.

Today, the rackets are made of lightweight metals and the outfits are significantly less burdensome. But walking into the All England Club, as I did yesterday, you’ll still see – and consume – many of the things that have been part of the quintessential Wimbledon experience for decades. The impossibly perfect lawn courts. The players dressed in white. Ivy-covered club house buildings, Pimms and strawberries and cream (although, in a sign of the times, there’s now a plant-based option available).

Tradition and heritage are fundamental to the Wimbledon experience. It’s almost impossible to imagine the tournament without them. It’s partly why the word ‘magical’ is so often used by people who have been fortunate enough to spend a day here during the Championships.

At the same time, a visitor to Wimbledon today can gain entry with a digital ticket on their Wimbledon app. The same app that provides them with a range of features, powered by IBM technology, to learn more about the players and get insights on who is most likely to win their match. Results from every match are available in real-time at the touch of a button or on TV screens, thanks to the highly skilled IBMers working behind the scenes to capture and process data from every point played.

Wimbledon has not stood frozen in time. It has evolved in step with the expectations of its audience. In many ways, Wimbledon is an excellent example of how storied institutions – especially those whose heritage is a core brand asset – can balance tradition with innovation.

A platform for continuous innovation

Twenty years ago and beyond, most people experienced Wimbledon through television. The BBC brilliantly brought the magic and beauty of the tournament to life, with all its drama and characters and this is how many a lifelong Wimbledon fan was made. Today, we increasingly experience life through digital channels, mostly via mobile. That’s especially true of the so-called ‘TikTok generation’, who expect seamless digital experiences as standard in virtually all aspects of their lives.

Like all brands, Wimbledon is tasked with keeping up with these digital trends to develop the next generations of lifelong fans. Leveraging innovation and modern technologies such as cloud, AI and automation, in partnership with IBM, is central to the All England Club’s strategy for achieving this.

Whether it’s a tennis Grand Slam tournament or a bank, organisations today need to be agile enough to quickly take advantage of new market opportunities by rolling out new solutions and services that meet their customers’ needs at speed. The ability to innovate quickly begins with having the right technological foundation in place – which today means taking a hybrid cloud approach.

Because Wimbledon has adopted this model, working across multiple private and public clouds, including IBM Cloud with Red Hat OpenShift, it’s able to leverage other modern technologies including advanced data analytics, AI, automation and AI-powered cyber security technology. These capabilities in turn allow the Championships to scale its IT operation by 55,000% for the Wimbledon Fortnight to turn millions of data points into insights for broadcasters and fans in near real-time, while keeping the tournament running securely.

It’s also what enables Wimbledon to offer fans the suite of digital features on the official apps and website, designed by the IBM iX team, which rely on technologies like IBM Cloud and IBM Watson. These features, including the IBM Power Index, IBM Match Insights and Personalised Recommendations and Highlights Reels, are helping the Club to pursue its goal of growing the Wimbledon brand’s audience and keeping it relevant, by meeting fans where they are and helping them get more familiar with the players and the matches.

The Club’s hybrid cloud approach is a platform of innovation that can be built upon continuously so that Wimbledon can keep delighting fans around the world with digital experience that inform, engage and entertain. It’s a model that allows new technological capabilities to be incorporated as they become available, helping Wimbledon stay on top of the latest audience trends.

As well as celebrating a century of Centre Court’s history, Wimbledon is also looking ahead to what the next hundred years will bring. As the Club imagines what the Wimbledon fans of the future might want from their experience, they can draw confidence from having the right technology platform and partner in place to continue engaging fans through innovation without losing that traditional Wimbledon magic.

To find out more about how IBM partners with the All England Club, visit https://www.ibm.com/uk-en/campaign/wimbledon 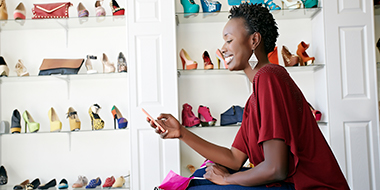 Kurt Geiger: walking their way into the digital era

Founded in 1963 Kurt Geiger are a leading luxury British footwear and accessory brand putting creativity and kindness at their core. The company has over 70 stores, and more than 170 concessions within department stores, including Harrods and Selfridges and has a strong online presence at KurtGeiger.com. Over the past five years, Kurt Geiger has […]