Every year, the BAME Apprenticeship Awards celebrate the talent and diversity of British BAME Apprentices, their employers and learning providers. This year, Tara Suran, an apprentice at IBM currently working as a scrum master within IBM Consulting whilst studying Chartered Management at Manchester Metropolitan University, was recognised as the winner in the Digital and Technology category. Hear from Tara as she shares more on her career journey so far, what she has achieved already and her hopes for the future. 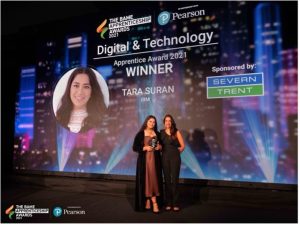 How did you get nominated for this award and how does it feel to have won?

My manager was keen to put me forward for this award this year and despite having reservations myself, he convinced me to go for it. Having that belief and support is amazing and obviously I’m delighted now to have won. In fact, all the recognition is incredible; I thought if I won the award as an early professional within such a large company, no one is going to know who I am, but I checked LinkedIn and I was proved wrong!

What attracted you to taking an apprenticeship at IBM?

I actually did two years as an apprentice at a solicitors prior to joining IBM but the culture for early professionals was very different there. So, I looked to switch career paths and applied to IBM. I joined on IBM’s level four junior management consultancy programme, and I can honestly say it’s been life changing – and I don’t say that easily.  I passed my level 4 apprenticeship with distinction, and I am now just embarking on my degree apprenticeship at IBM, doing a level six in chartered management.

What kind of roles have you done during your time at IBM?

The opportunities that I have had so far have been amazing. My first ever role was in project management with a large life science company and within the first month I was already presenting in front of executives at IBM and the CEO of the client. I’ve also worked in defect management, as a business analyst and I’m currently starting a scrum master role. I’m part of the test practice within IBM Consulting and for each role, I have had an incredible level of support.

The great thing is that everything I do on the job counts towards my apprenticeship, including additional training. It feels like I am constantly learning, improving my ability to both do my role and achieve my qualifications.

Which post school route did your peers choose to take?

Most people chose to do the traditional route and continued in full time education. My family were keen for me to study something like pharmacy at university, but I knew that wasn’t for me. Being able to work at the same time as doing my degree is fantastic – I will come out of my apprenticeship with no debt, experience, a network, and an understanding of the industry. I see peers struggle to find graduate roles as it is so competitive and this just reinforces to me that I made the right decision.

You say it’s been life changing, what do you mean by this?

I come from a small town where everybody knows everybody else. Suddenly, when I joined IBM, I found myself in a very big pond. I worried that it might be difficult to make connections and be recognised for my individual contribution – perhaps seen as just a number amongst many in a corporate world – but that couldn’t be further from the truth. The most incredible thing is the level of support that I receive and how much people believe in me.

For example, since being at IBM and after the killing of George Floyd in 2020, I knew I wanted to bring issues and topics affecting BAME early professionals to the fore and was able to create and now co-lead our Early Professional Emb(race) community.

The amount of support that we’ve had as a community from across the business has just been insane; it’s been incredible, and we’ve even been nominated for the Women in Tech awards for EP Emb(race).

What are you passionate about outside of IBM?

I’ve always been really into my politics. My family are from Kurdistan, although they’ve been in the UK for over 30 years now, I get to see two very different lifestyles and I’m therefore passionate about helping those from back home. I try to do as much as I can for civilian refugee camps, and I’ve visited a few times to help. It’s been incredible and I love to do it.

Your advice for anyone considering an apprenticeship?

My parents were set on university, and now my dad comments on my LinkedIn posts of how proud he is of me. The apprenticeship has opened many opportunities, and it is what you make of it, if you want to succeed the path is there, the support is there. If I could change just one thing, it would be that I would have picked IBM sooner.

For more information about apprenticeships at IBM, or to register your interest for available roles, please visit – https://www.ibm.com/uk-en/employment/entrylevel/

Digital Transformation in Defence - Balancing the Strategic and the Tactical 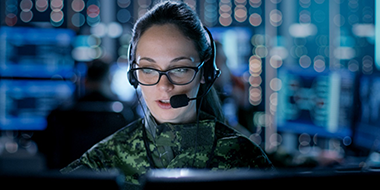 As we discussed in our first blog post, defence is on the cusp of a paradigm shift with the development of Multi Domain Integration (MDI) with many assets connected, often via sensors, in a ‘network of networks.’  In another post, we explored digital engineering extending to support in-service assets and digital twin. The model implies […] 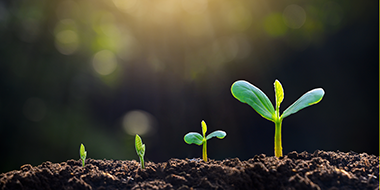 No man is an island. It takes a village to raise a child. Many hands make light work. There are numerous sayings incorporated into our daily language that highlight the importance of teaming. Of interest here is the fact that these sayings apply not only to our personal lives but are valid in all sorts […]

By Christopher Dabrowski and Jon Barber on 11 January, 2022