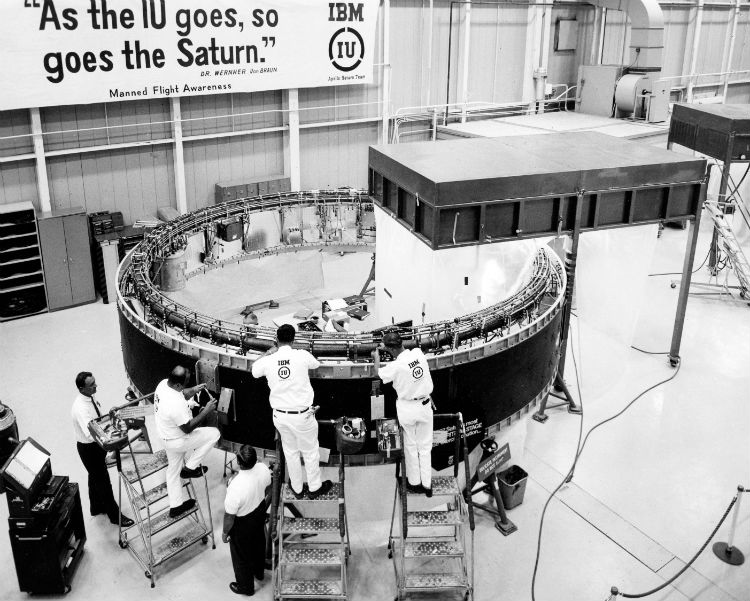 Guidance computers based on the IBM System/360 mainframe were built into the Instrument Unit that sat atop the third stage of the Saturn V rocket propelling Apollo astronauts into space.

Less than a minute after Apollo 12 lifted off from the Kennedy Space Center on Nov. 14, 1969, it was struck twice by lightning. The electrical surges knocked out the main on-board power supply and disrupted the telemetry feed that was sending data from the command module to NASA controllers on the ground. Their monitor screens were suddenly filled with a scramble of seemingly random numbers. Apollo 12 was literally flying blind, putting the mission in imminent jeopardy.

But the computers programmed by IBM to keep Apollo 12 on course kept doing their job.

Those guidance computers were specially constructed to pack the power of a complete IBM System/360 mainframe into 60-pound suitcase-size units. They were installed in the instrument unit (IU) that sat atop the third stage of the Saturn V rocket propelling Apollo 12 into space.

“The IU was the real hero, because it didn’t stop performing,” says Homer Ahr, an IBM programmer who was working at Mission Control that day. “It was flying the trajectory it ought to fly. That was all due to the IUs not being affected by the lightning and continuing to do their job.”

Apollo 12’s telemetry was restored by the quick thinking of NASA flight controller John Aaron, who recalled a similar disruption during a test the previous year. “I had witnessed, in a ground test on Apollo 7, the signature of the problem that was right in front of me,’’ Aaron said. “I was able to remember the same random pattern of the numbers.’’

It wasn’t a malfunction written up in any NASA manuals, but “I was able to remember the same random pattern of the numbers,’’ Aaron recalled. So, he knew what to do next. He told the flight director to have astronaut Alan Bean “try SCE to Aux” – switch the feed in the command module over to the backup power system.

With the telemetry restored, Aaron could see the root of the problem. The lightning had caused the power fuel cells to disconnect. He told the flight director, Gerry Griffin, to reconnect the cells. The mission was back on track.

Up to that moment, the Flight Director Griffin ‘’was probably thinking I might call an abort,” Aaron said. “I don’t know exactly how close we were to aborting that mission right there in the launch phase.’’

Because Neil Armstrong in July had accomplished the decade-long goal of landing on the moon, each subsequent Apollo flight was seen as a dangerous pursuit that might not be worth taking.

‘’Everybody knew it was risky to keep going to the moon,’’ Aaron said. “The program could very well have ended right there. Apollo 12 was a pivotal, watershed event.” 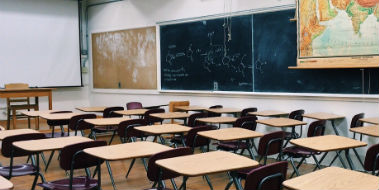 The Government of Nova Scotia continually works to support the future potential of our students and help create opportunities for young people to see a future for themselves in our province. We are pleased to announce a new option for students through a unique IBM-inspired program that will provide more opportunity in the information technology […] 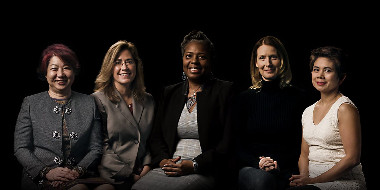 In Their Own Words: Leading Women in Tech Confront the Gender Gap

With only a quarter of U.S. technology jobs currently filled by women[1], there is far more we must do as an industry to close the gender gap. And let’s be clear, closing the gender quality gap benefits society as a whole; there is a strong correlation between business performance and a gender diverse workforce; companies […]

Women of Color in STEM Take Center Stage at the Oscars

When the Academy of Motion Picture Arts and Sciences holds the 89th Oscars this Sunday, I’ll be rooting for “Hidden Figures” to win Best Picture, and Octavia Spencer to win Best Supporting Actress. Since both Black History Month and National Engineers Week occur in February, it would be great if during this month, the movie […]