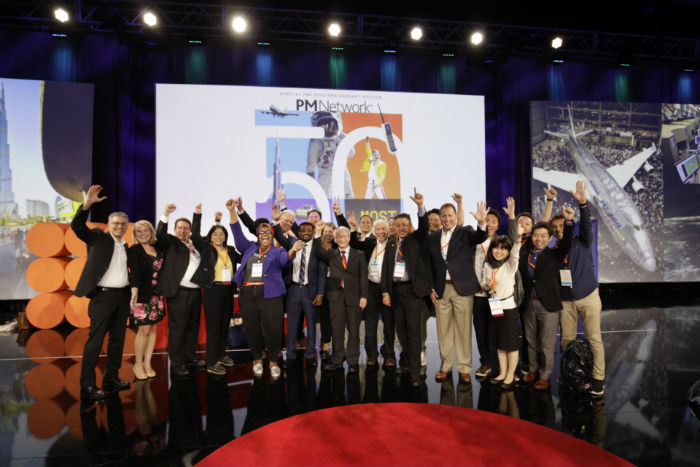 PMI members assembled in Philadelphia, Oct. 7, 2019, to celebrate the organization’s 50th anniversary and the revealing of the 50 Most Influential Projects list. (Credit: PMI)

In celebration of its 50th anniversary, the Project Management Institute (PMI) has announced a first-of-its-kind ranking: the 50 Most Influential Projects of the Past 50 Years. This list, which spans notable and influential projects across decades, industries, disciplines and locations, represents PMI’s vision of how project work can turn ideas into reality and help change the world as we know it.

In addition to these 50 projects, PMI released 14 lists recognizing the top 10 most influential projects in a variety of regions and industries, including entertainment, finance, healthcare, and more.

IBM is pleased to see that IBM Watson is ranked on both the Top 50 list, as well as on the Top 10 Most Influential Technology Projects list.

The 50 Most Influential Projects of the Past 50 Years list will be revealed today, October 7, 2019, at the PMI Global Conference in Philadelphia. For an in-depth view of all honored projects, including IBM Watson, visit here or read the October issue of PMI’s PM Network® magazine.

For many years, PMI and IBM have worked together to advance the skills and careers of IBM project managers. In addition to IBM’s industry leading PM certification program, IBM’s PM Center of Excellent continues to encourage all project managers to pursue the Project Management Professional (PMP)® certification and become PMI members.

“The world is shifting increasingly toward a project-based economy, making

sound project management skills and approaches more essential than ever,” said Otema Yirenkyi, Vice President, Global Engagement at PMI. “IBM has been an invaluable partner with PMI for many years — as their advocacy for the project management profession spans areas as diverse as talent development to new ways of working in every industry sector around the world. They have played a critical role in helping PMI to advance careers, improve organizational success and further mature the profession.”

In addition to being a member of the PMI Executive Council, IBM continues to help PMI with standards development, and is currently helping PMI define the PMP of the future. We participated in PMI’s most recent round of research to understand how the profession has progressed, the impact of emerging trends, and how the responsibilities of project managers have changed. We were also a member of the steering committee that helped design the new PMP exam.

IBM has been a resource for PMI white papers and case studies, as well as guest speakers at PMI events, including PMI Global Conference, PMI EMEA Congress, PMO Symposium, and more. IBM has been an editorial source, conducting interviews and writing articles about PMI’s work and the project management profession as a whole for publications like the New Statesman and more.

The honorees of the 50 Most Influential were chosen from among more than 1,000 high-impact projects identified by 400 leaders in the global project management community, including PMI chapter leaders and members, as well as academics and industry experts.

In addition to nominated projects being vetted for their open and close dates, some of the other considerations were if they impacted society, the business world, or the profession; if they were innovative or influenced future projects; and if they are recognized as iconic or game-changing across generations.

The final selections, made by PMI’s thought-leadership team, provide an inspirational reflection on what project work has enabled and the central role it has played in creating our present.

This recognition showcases the magic that can happen when great collaborators come together, have a clear vision and use strong project discipline to deliver on this vision.

City 'Congestion Pricing' Helps Commuters Out of a Jam